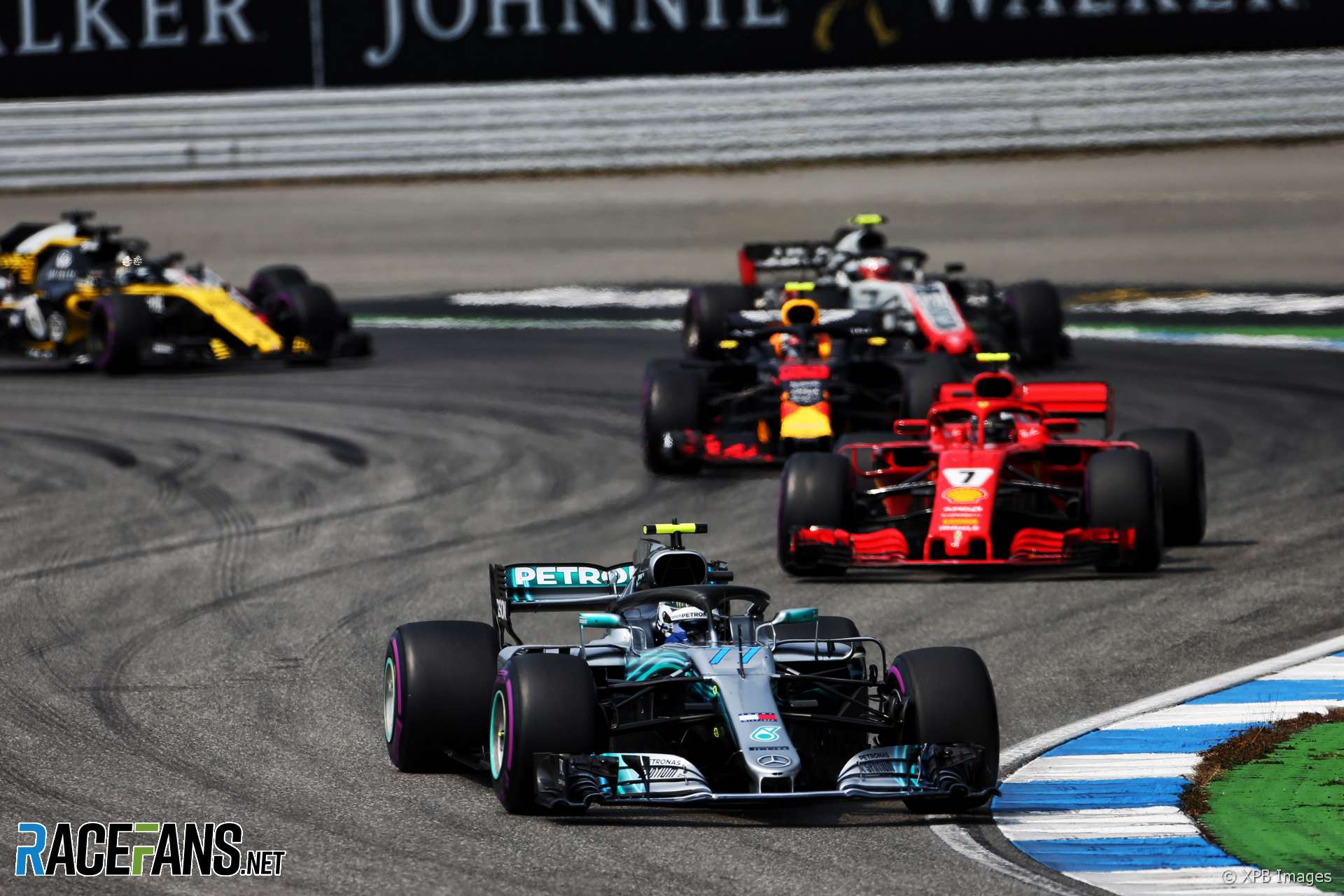 Last week we examined the spending by the five teams who finished in the bottom half of the championship. How much did it cost Mercedes, Ferrari, Red Bull, Renault and Haas to go racing – and where did they get their money from?

RaceFans’ exclusive Formula 1 team budgets analysis shows the three biggest teams spent more money in 2018 than the rest of their rivals put together.

Read on for part two of our analysis.

See part one for notes on how the budgets were calculated and how our figures are broken down.

Competing in F1 for its third year, Haas qualified for FOM Column 1 monies for the first time in 2018. This boosted its income by $30m which eased the burden on machine tool magnate Gene Haas – who uses F1 as marketing platform for his machine tool empire – and provided for a 10 per cent headcount increase. Theirs remains the lowest in F1 by virtue of Haas’s unique listed parts business model.

Stability has been further factor in Haas’s rise up the order. The team has retained Romain Grosjean and Kevin Magnussen for a third year in 2019. It will also receive two budget boosts after improving its championship position from eighth to fifth and signed Rich Energy as title sponsor in a three-year deal worth $15m/annum.

Haas’s business model means its primary asset is a filing cabinet containing contracts: with Dallara for listed parts, and Ferrari for powertrains and non-listed parts. Thus its operating costs – and, by extension, budget – are the lowest on the grid by a substantial margin; hence Haas comfortably walks our B4B index.

In our third season we further streamlined the team and improved efficiency, while an increase in budget enabled a headcount increase of 10 per cent. Having qualified for the full spectrum of FOM monies, we were able to improve on-track performances despite being a young team.

Following its acquisition of Lotus ahead of the 2016 season, Renault had a ‘ramping-up’ year in 2017 and this season concentrated on consolidating its efforts. Thus headcount has grown marginally despite a budget boost of $10m. This suggests prudence: the level matches future cost cap projections, while $190m is in line with F1’s budget cap glide path.

Improvements to the team’s facilities continued through the year. But there are concerns about the future after the arrest of CEO Carlos Ghosn. If the cost-saving alliance with Nissan and Mitsubishi splits, its $20m from Infiniti would go missing. Unsurprisingly the team downplays this situation but it remains a real threat, especially if its performance fails to improve.

Funding is derived from three primary sources: Renault’s main company, which subsidises group motorsport activities to the tune of $200m per annum across all categories, half of which is earmarked for F1; FOM income – up by $10m due to improved 2017 performance, and set for another boost next year; and commercial funding. FOM income ensured that Renault’s subsidy remain stable despite the budget increase.

Signing Daniel Ricciardo for 2019 should aid performance and commercial prospects although, strangely, Nico Hülkenberg’s German following remains untapped. Threats are that McLaren – with Renault power – comes good, that Haas continues its upward trajectory and Racing Point reverts to its previous giant-killer ways. It made hard work of taking fourth in the championship, and could easily have been sixth.

Renault is the largest carmaker involved in Formula 1 – full stop. So we can afford anything as long as it makes sense. It’s just a question of value for money, and whether it makes sense to spend that given where we are in the development of our team.

Red Bull’s UK-based operation draws on two interlinked companies: Red Bull Technology (800 employees), which provides components and technical services to Red Bull Racing (60), the race team entity. However RBT also supplies certain permitted technologies to Toro Rosso and provides services to other group companies – plus partners Aston-Martin on the Valkyrie hypercar project – so ‘purified’ figures for the budget and headcount are offered above.

During 2018 Red Bull, which earns in dollars (sponsors/FOM) and Euros (Red Bull), gained from the drop in the value of sterling caused by Brexit, but did not grow its sponsor portfolio significantly. Therefore Red Bull upped its contribution. Driver costs should fall next year as long-time Red Bull junior Pierre Gasly replaces Ricciardo. Max Verstappen has freedom to find (non-conflicting) personal sponsors, suggesting he has a lower basic wage than the Dutchman demanded. Dutch fashion company G-Star RAW is his first major deal.

With both Red Bull teams sharing Honda power from 2019, significant synergies and cost-savings are mooted. Toro Rosso plans cuts at its Bedford wind tunnel and greater use of parts shared by the two teams is planned, but management is adamant that levels of co-operation will not hit Ferrari/Haas levels. All-in, Red Bull Racing expects a performance boost as its Honda relationship evolves, and that will improve future finances.

Responsible regulations are the key. When you look at what are the cost-drivers in this business, it’s the technical regulations that drive the cost.

Uniquely, Ferrari produces its Formula 1 car within one complex. Facilities, R&D and manufacturing are shared with its road car division, which supports the Gestione Sportiva in lieu of marketing.

How will this square with F1’s much-vaunted budget cap remains to be seen, as clearly Ferrari will have to comply in the same fashion as their rivals. Our suggestion is that future sporting regulations include clauses stipulating that F1 entrants be standalone financial entities with independent profit / loss reports and purchase ledgers. If Ferrari does not toe the line, it always has the option of racing elsewhere.

Commercially, the team benefits from the largest slice of FOM revenues – pocketing 20 per cent of the ‘pot’ – with Shell and UPS complementing $100m provided by Philip Morris in exchange for its ‘Mission Winnow’ message and access to the team for promotional purposes. Licensing tops up the $410m budget.

The untimely death of president/CEO Sergio Marchionne in mid-July clearly knocked Ferrari, while replacement Louis Camilleri has yet to make an impact on performance. The immediate signs were not good for the team: after the Italo-Canadian’s passing Sebastian Vettel lost the title initiative and its share price plunged from $140 in early July to under $100 a week ago.

All this suggests that Ferrari is in for a torrid time once budget restrictions are introduced, for thus far it has been able to purchase performance courtesy of having F1’s largest headcount and biggest FOM bonus. However, where Marchionne’s threats to exit F1 were to be taken seriously, Camilleri has adopted a softer approach. Thus Ferrari is likely to remain in F1 regardless of budget cap.

Wolff and Lauda’s contracts are expected to end in 2020, coinciding with the expiration of F1’s current agreements. That indicates head-scratching in Brackley corridors about the team’s future, particularly as outgoing CEO Dieter Zetsche is to be replaced by Olla Källenius, previously head of HPP and AMG before moving up to the parent company. Whether the Swedish engineer considers F1 to be good value now or in future is key to the future commitment of the team which is dominating F1 at present.

As a high-technology company, the team can adapt competitively and commercially to changes in its operating environment, and will continue to invest in its capability and culture to ensure medium- and long-term success both on- and off-track.

Clearly a massive performance gap exists between the ‘big three’ – Mercedes, Ferrari and Red Bull – and the rest. No team outside this trio has won a grand prix in the 100 races since FOM (then under the control of CVC Capital partners) began making its inequitable team payments. This is reflected in the size of their budgets.

However when it comes to the business of making their cars quicker year-on-year, most of the smaller teams have made greater progress on their budgets. Sauber leads the way, having spent £54m per second of lap time it found compared to last season. This not only points to the new-found efficiency of the team under Frederic Vasseur, but also to the relevance of this performance metric. That Haas is second on the list underscores its accuracy.

Due to restrictions on race team strength, wind tunnel/CFD usage, engine and tyre costs, bans of testing outside of official sessions and other costs inputs, it costs around $100m to design and race two cars over a grand prix season, with the delta to budget spent mainly on development.

On that basis teams such as Racing Point and Haas have around $25m per annum discretionary spend for development; Mercedes and Ferrari $300m. The latter found 1.13 and 1.19 seconds respectively. Clearly they are feeling the diminishing returns of the current regulations more keenly than their smaller rivals, but does this kind of spending really serve the sport’s best interests?

On our Bang-4-Buck index, Mercedes comes out tops despite its budget advantage over independents. This is predominantly due to weighting of the points table in favour of wins, of which Mercedes had plenty, and the fact that the top three generally locked out the big points places – from seventh to 10th the spread is six points in total, or a quarter of a win. Still, Mercedes did the business for the fifth year in a row, so hats off to the team.

The challenge for Liberty and the teams is to grow sponsor and television revenues while cutting costs to ensure profitable teams. Significantly, only two teams posted (modest) profits, and then only after inflated shareholder subsidies – reduce these, and red ink flows, so in real terms they’re paper profits. F1’s imperative is to build profitable, sustainable teams which don’t rely on the largesse of billionaires or blue chip boards.

The building blocks required to achieve that need in time for F1’s promised (by Liberty) 2021 rebirth need to be in place within the next 12 months. But the last 24 months have seen little tangible progress towards that vital goal.