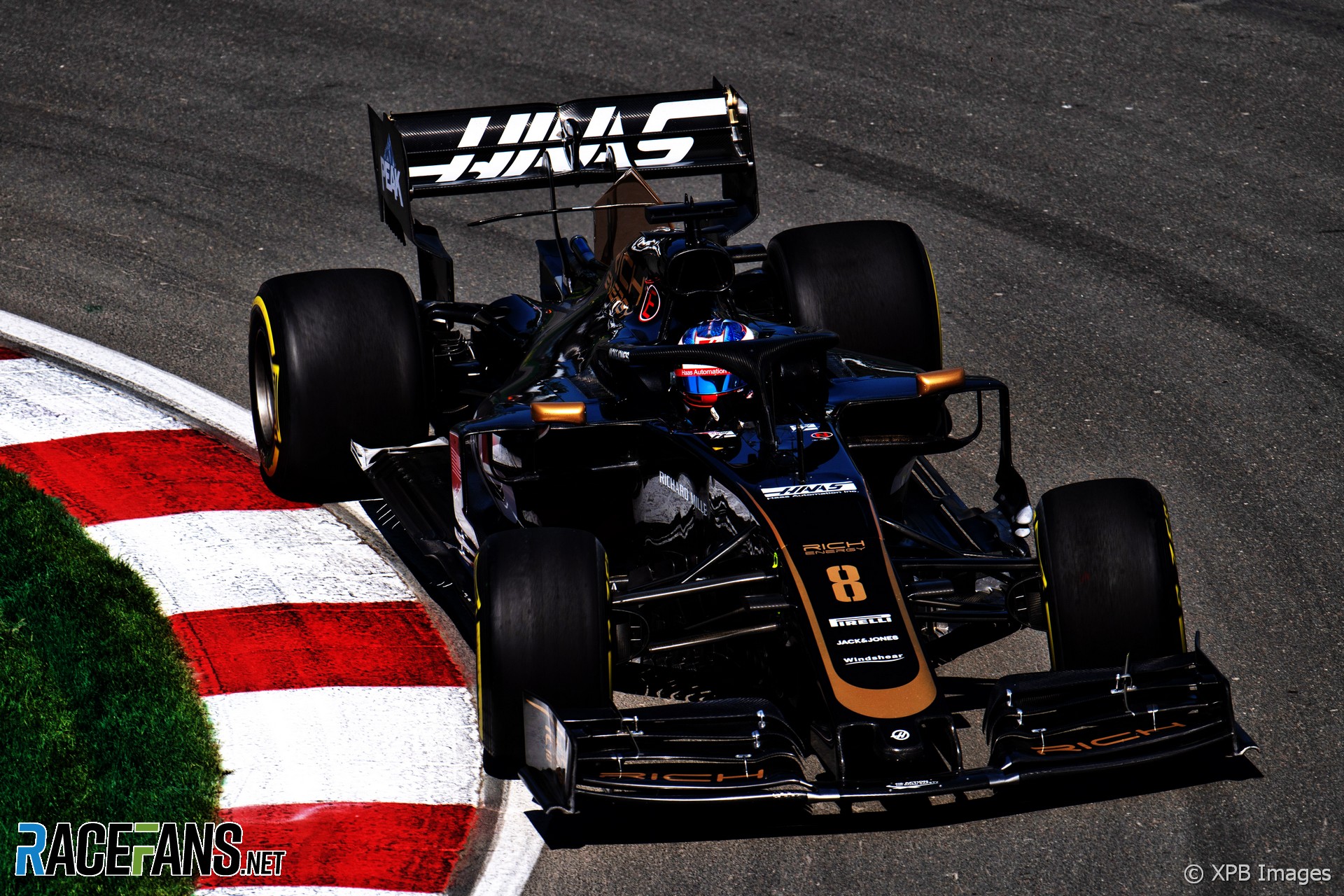 “As we firm up the business model for team ownership,” he said, “we’d love to have – we have Haas as the US team – [but] we’d love to add to that with a high-profile US team. Down the road, you’d love to have a US driver, [but] that probably takes longer.”

Aside from the fact that his comment obliquely suggests Haas is not ‘a high profile US team’ the question is why any US-based entity would wish to join F1, particularly in view of the treatment Haas has experienced.

Haas is currently embroiled in arbitration against Liberty over the latter’s decision to pay Racing Point a share of the prize money it does not appear to qualify for under team agreements. When Haas joined the sport it did so in the knowledge that for two years it would not qualify for up to $60 million in so-called Column 1 money.

Subsequently, to Haas’s surprise, last year Racing Point was promised (and paid) Column One monies by Liberty when it took over the assets of Force India and entered the sport legally as a new team. Haas feels short-changed; hence the ongoing dispute.

When Haas entered F1 it did so by exploiting a gap in the regulations that enabled it to ride on the back of Ferrari by procuring ‘non-listed parts’ from Maranello, and having listed parts – those to which teams need to own the intellectual property to – designed and (largely) manufactured by Dallara.

So the team has filing cabinets filled with technical and commercial agreements with Ferrari and Dallara, supplier agreements with such as Pirelli, and employee contracts; team equipment is leased, whether trucks, the race base in Banbury, etc… The team hit the ground running with top six finishes in its first two races and within three years had bagged fifth in the constructors’ championship.

This is an oversimplification of the Haas operation and is of course not intended to diminish the efforts of team owner Gene Haas, team principal Guenther Steiner or the rest of the crew; indeed, precisely the opposite, for it points to their astuteness in exploiting the letter of F1’s regulations. But it explains how and why Haas was able to beat five teams in last year’s constructors’ championship despite drawing on the smallest budget ($130m) and headcount (250) of all.

Others with way more finished well in arrears. Naturally, this has not endeared Haas to its rivals: The team’s modus operandi was widely lambasted by direct competitors. Before they had even turned a wheel in anger a number of regulatory loopholes closed after requests for clarification were submitted to the FIA by others.

It took Haas almost two years to establish the necessary infrastructure – despite not having its own factory in Europe, and leasing Ferrari’s aerodynamic facilities. Thus, it stands to reason that it would take any newcomer a similar period at least to get up and running – assuming the incoming team is permitted to adopt the Haas model under the new (2021-onwards) regulations.

Given that these will only be published after October 31st, no clear road map for the 2021-25 period currently exists, and therefore no planning is possible before that date.

As outlined previously, from 2021 the parts which comprise a Formula 1 car will be categorised as follows:

Until clarity is provided as to which of a race car’s 6000-plus highly complex components fit into which of the four categories, no informed decision about entering a new team into F1 can be taken. Even then a Haas-type entry is dependent upon finding a ‘mothership’ willing to sell technical secrets and a production race car manufacturer with F1 capacity. There are not too many of either about.

Even then the earliest any team, regardless of domicile, could hope to compete respectably would be 2022. And there are still two more major elephants in the room: The unresolved question of team revenues, more precisely the level of income teams may expect from CRH in return for their participation and commitment to the championship for that period; and Ferrari’s veto.

For the sake of argument, let’s assume that an eternal optimist exists somewhere in the USA (or anywhere else for that matter), one willing to gamble a billion bucks – the minimum spend over five years – on competing in a sport with a commercial survival rate of less than 10 per cent. How would he or she go about it?

Logic dictates that a candidate team would be drawn from an existing motorsport operation. Haas F1 Team grew tangentially out of Gene’s highly successful motorsport empire, which includes the winning Stewart-Haas NASCAR operation, the state-of-art Windshear wind tunnel and a Baja off-road team. However, this was only possible due to F1’s listed parts regulations, which are unlikely to continue.

Gene Haas entered F1 to promote his eponymous machine tool products, and does not need to scrounge for sponsors. He came into F1 at a time when his primary competitor – DMG Mori – backed Porsche’s Le Mans team. F1’s geographic footprint fits his product portfolio perfectly with races in major car building territories such as Europe, China, Mexico and Brazil.

However, that does not mean our hypothetical petrolhead billionaire owner of another widget company will find the same F1 ‘fit’ for his products and be willing to take a one-in-ten chance on making the respectability grade. The likes of Gene Haas are few and far between, and the mere fact that he put his (substantial) money where his mouth is, does not mean others will follow, particularly given the treatment of his team.

This applies equally to entrepreneurs across the world, not in only the US. It explains why no abundantly-funded team has entered F1 since Toyota in 2002 – an outfit which failed to win a single race in eight years of trying.

Could an existing IndyCar team convert to F1, much as Penske and Vels Parnelli Jones did in the 70s? It’s highly doubtful. Back then both teams had established bases and were experienced race car builders, and even lasted three and two years respectively before heading back across the Atlantic to concentrate on what was then known as USAC and other US series.

Current IndyCar teams purchase specification chassis and Chevrolet or Honda power units, with few modifications permitted and thus race bases are more workshop than factories with design offices. Current IndyCar teams are akin to F2 operations, albeit with a choice of two engine brands rather than one and aero options to suit streets, road circuits and ovals. The two championships even share a common chassis manufacturer in Dallara.

That said, what was the last successful F1 operation to arrive from F2? To answer that we have to look past its predecessor GP2 to the Formula 3000 era. Stewart – now Red Bull – arrived in 1997 via F3; Sauber, which runs Alfa Romeo’s team today, made the F1 grade in 1993 with ‘Concept by Mercedes-Benz’ funding. Jordan (now Racing Point) is therefore the last team on the grid today have arrived from F1’s ‘feeder series’.

Having accumulated the necessary infrastructure during a period when chassis and engine choices from Formula Ford through F3 to F3000 were ‘free’ and development on both unrestricted, Stewart and Jordan were 50 per cent of the way there before making the leap into F1 – although Eddie Jordan now takes great delight in relating how he was plagued by bailiffs during his first three years in F1.

Jordan’s route to F1 vividly illustrates the stark difference between F3000 teams of yesteryear and current F2 or IndyCar operations. Where the former had (mainly) progressed up the ranks through a combination of engineering and performance, often building own designs along the way, the latter group basically ‘paints by numbers’, with every nut and bolt and washer being a specification part.

Yet, should they have designs on F1, they are required to build a complete and extremely complex car from scratch, one capable of participating in the world’s highest-tech racing series with aplomb. Any wonder the last four turn-key F1 operations either failed to even start a race (USF1) or collapsed within five years of incorporation (HRT, Manor and Caterham)? Haas is not, of course, a turnkey operation, relying as it does on Ferrari/Dallara technology.

Three decades ago the FIA entry list boasted no fewer than 20 teams, most of whom graduated from categories such as F3, F2 or F3000, then bought an engine and gearbox, and built a chassis. Some, such as Tyrrell (now Mercedes after spells as BAR/Honda/Brawn) and Minardi (Toro Rosso) swam while others sank – but the point is it was possible to graduate. The structures changed over the intervening 30 years, but F1 did not adapt.

Then there is the question of engines: with four suppliers and no proprietary engines available, incomers are dependent upon the largesse of manufacturers. True, there are supply regulations in place, but who in this age wishes to blow a billion bucks on an F1 project over five years, then be saddled with Renault power?

F1 is not the only way for industrialists to blow their excess advertising dollars, and the sooner that fact is recognised by the sport’s commercial masters, the better for the long-term health of F1. Equally, prospective entrants need to be assured they stand reasonable chances of winning on merit, rather seeing podiums locked out Sunday after Sunday.

To attract new blood the sport needs to provide stable regulatory platforms with sufficiently long runways to make it viable for entrepreneurs to embrace F1, with concessions granted for limited periods. Would Haas have entered F1 without hitching a lift with Ferrari? Only Gene could definitively answer that, but the odds are the answer is negative for he has related how the model made F1 entry attractive for his company.

However, F1’s inflexible structures make it a hard sell: A 14-month runway (or less) to a major regulation change with massive cost implications is simply unacceptable in any industry, yet seems to be the norm in F1. While F1 internally prides itself on such gung-ho ‘can-do’ attitudes, such arrogance causes potential entrants to walk away in bewilderment.

Equally, constructors should create cars, not simply assemble bits. F1 needs to find a happy medium between the two.

Current covenants expire at the end of 2020 and any of the current teams – whether Ferrari, Mercedes, Haas or any other – could choose to walk away. If that happens, F1 could well find itself with under its regulatory minimum threshold of 16 cars. A hoped-for high-profile US-based team surely won’t plug that gap.

A grid of 24 cars – or even 26, as permitted by the regulations – is a noble objective, as is another US team or one from any other place on earth. But to attract such entities F1 needs to make the sport attractive, both commercially and technically. Why this talk about ‘a high-profile US team’ when the sport already has one, and China’s car market is 30 per cent larger than that of the USA?

However it is sliced, Haas should not be treated as the sport’s whipping boy. And until F1 reinvents itself to make itself more attractive to newcomers the sport simply does not deserve them, regardless of their nationality.