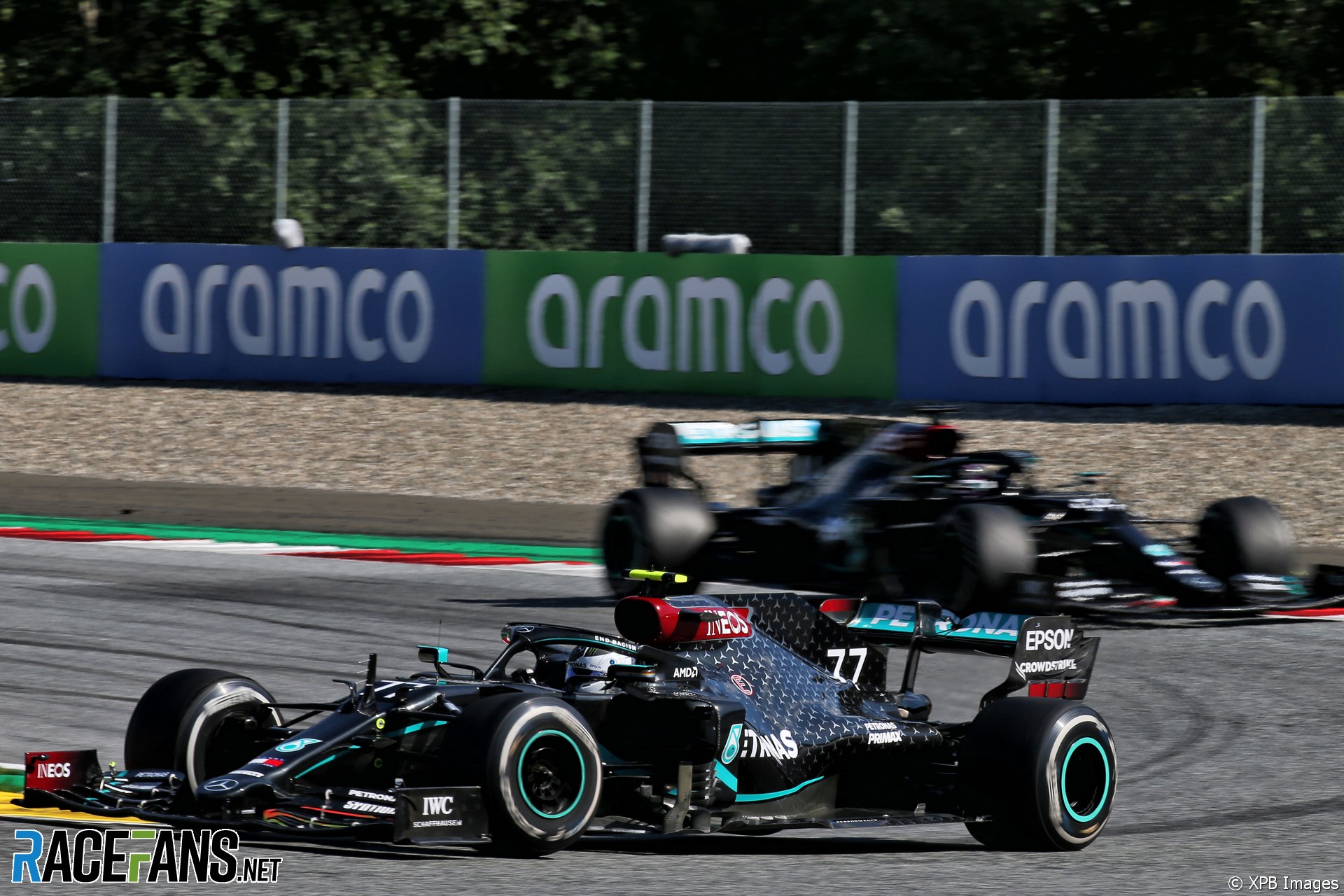 Mercedes went into the Austrian Grand Prix expecting to encounter the technical problems which forced them to slow both cars.

“We were aware of it on Friday when we saw that Valtteri had an issue at the end of one of the sessions,” he said. “So that was the first sign that we had a problem.

“We’ve had recurrent issues over the course of Saturday and going into the race we were expecting it because it seems to be a feature of the model. So at the moment if we build the car and run it, this problem will appear at some point. It’s a question of how soon.”

Mercedes were concerned the problem could affect the cars’ gearboxes. Bottas and team mate Lewis Hamilton were told to take extra care with their cars and avoid using the kerbs to reduce the stress on their W11s.

“It’s basically a build-up of electrical noise that starts to interfere with the various systems,” Shovlin explained. “So with Valtteri we saw this around halfway through the race, got progressively worse, with Lewis it appeared later.

“But it’s electrical noise that’s then affecting a lot of different things.”

The first race of the season saw an unusually high number of retirements, with just 11 of the 20 cars still running at the end of the race. Shovlin suspects this was a combination of the long delay since pre-season testing, and teams introducing performance upgrades to their cars.

“One element that might be linked to the length of the break is just that people have changed their cars since Barcelona,” he said. “So there’s the opportunity to introduce an issue.

“That may be most prevalent on the power unit side, because those are very easy things where you make change and there’s knock-on effects, but everyone’s wanting to get their best chance power unit into the car for the start the season.”

However he pointed out the Red Bull Ring is particularly tough on the teams’ hardware. “Austria is just a really horrible circuit for the cars.

“This is a circuit that’s actually quite easy to overtake. And as a result, if you don’t use the kerbs, if you don’t push hard, you’re at risk. So that’s one of the factors.

“But it’s the kerbs themselves that are very violent and you spend a lot of the lap running on them. For us, that was that issue. And it probably doesn’t help that it’s nearly 30 degrees here, the air is a bit thin so it’s hot, there isn’t as much cooling as you normally get and all the temperatures inside the car are high.

“Every year this is a race of attrition. And having it as the first race and then having two of them, one after the other because we think we can make some strides to improve some of our problems but others aren’t going to get better on the same track.

“So a lot of people you’ve sort of got another dose of it coming up and it’s a race against time to try and make a bit of headway into those complications.”