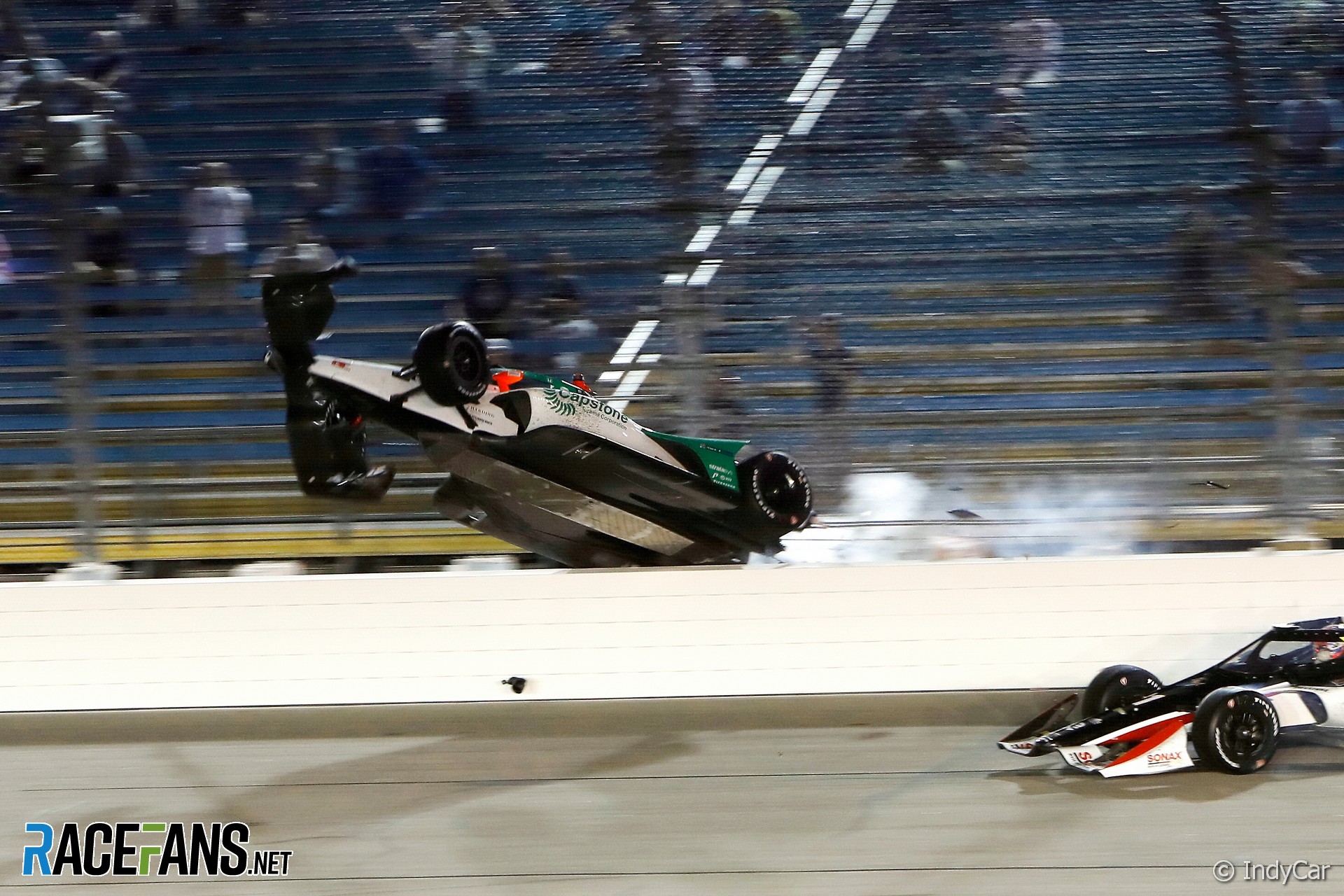 A fuel pressure problem in qualifying left Simon Pagenaud last on the grid for the first of IndyCar’s two races at Iowa Speedway this weekend.

But the 2016 champion cut his way through the field over 250 laps of the 1.4-kilometre oval. He took advantage of a long caution period to score his first real-world IndyCar victory of 2020, following his pre-season successes in its virtual series.

Conor Daly and Carlin scored their first pole position in a novel qualifying format which set the grid for Friday and Saturday’s races. At the start he came under immediate pressure from Josef Newgarden, and within 14 laps the Penske driver had found a way around the outside of him for the lead.

Will Power, who started third, passed Daly and quickly reeled in team mate Newgarden. Power made his first stop one lap before Newgarden, who then suffered his second pit lane delay in as many races – albeit not as serious as the one which cost him victory in Road America, handing Power the advantage on lap 71.

Takuma Sato was the first driver to pit on lap 47, giving him the benefit of leading the pack, albeit on significantly older tyres than this rivals. Behind him Newgarden and Power resumed battled for second after the first pit stops.

Tony Kanaan was the first driver to hit with the wall, but the slight contact was only enough to bend the rear suspension and send the veteran driver to the pits. He was eventually able to take to the track again but finished 37 laps down.

Newgarden finally passed Power on the inside and inherited the lead three laps later when Sato made his second stop of the race. At the second round of pit stops Power jumped ahead of Newgarden again but it proved short-lived: Power’s front left tyre was not attached properly and he slammed into the wall, bringing out the first caution on lap 144.

McLaren SP, who came close to winning at Elkhart Lake last week, briefly ran one-two during the yellow flag shuffle, but both drivers still had to make another pit stop. The latest attempt to restart the race was aborted, prompting a spectacular crash. Colton Herta failed to slow down, and was launched over Rinus VeeKay in spectacular fashion, putting both drivers out of the race.

Both drivers emerged unscathed – in VeeKay’s case, potentially thanks partly to the new Aeroscreen. This extended the caution period as the debris was cleared from the main straight.

Pagenaud passed both McLaren SP drivers at the restart on lap 178, but would have to nurse his tyres and fuel to make it to the chequered flag. Behind him both McLaren drivers peeled into the pits, bringing points leader Scott Dixon onto Pagenaud’s tail.

However Pagenaud denied Dixon his forth win of the season, eking his fuel and tyres out as he returned to the top step of the podium for the first time in a year.

Rookie Oliver Askew scored his first podium in IndyCar with McLaren SP team mate O’Ward close behind. Newgarden recovered to fifth after the caution threw off his strategy with Alexander Rossi behind him. Jack Harvey, Conor Daly, Marcus Ericsson, and Takuma Sato rounded out the top 10.