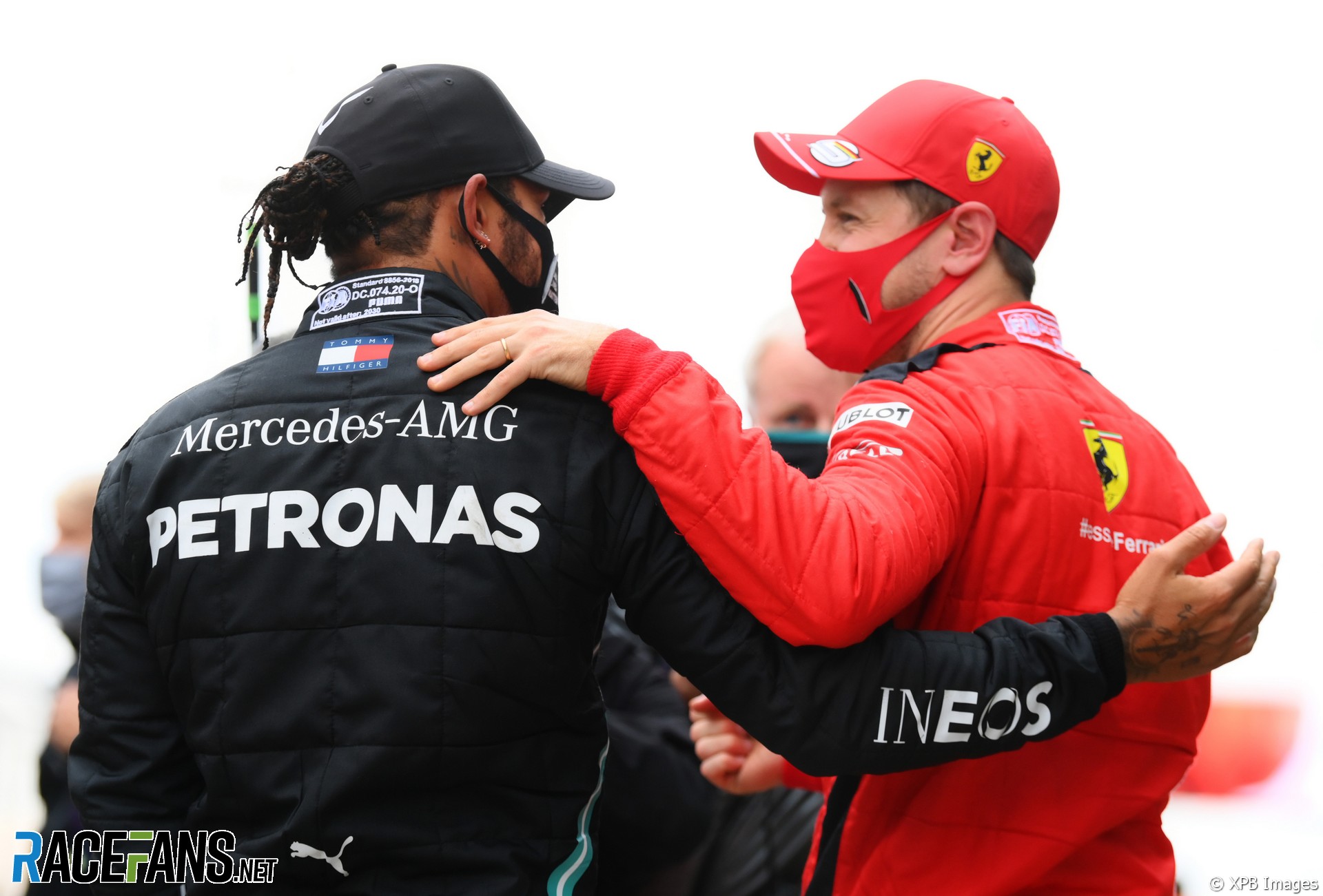 Sebastian Vettel – who won his fourth and most recent world championship when Hamilton still had only one title to his name – greeted Hamilton in parc ferme after yesterday’s race and told him: “We are witnessing you making history, man.”

Speaking in the FIA press conference after the race, Vettel said it was hard to compare between drivers from different times, but he believes Hamilton is the leading driver among the current generation.

“I told him it’s very special for us because we can witness history being made today,” said Vettel. “I think he is greatest of our era for sure.

“It’s always difficult to compare. How can you possibly compare Fangio, Stirling Moss to our generation? You can’t. Maybe we would be useless because we would all be shitting ourselves in those cars. Maybe they would be useless in our cars because they’re way too fast. Who knows?

“But it doesn’t matter, I think every era has its driver or its drivers and Lewis is certainly the greatest of our era.”

Vettel acknowledges that, despite his deep respect for Schumacher, Hamilton has now matched or outstripped his greatest achievements.

“To me, certainly emotionally, Michael will always be the greatest driver. But there’s no doubt that Lewis is the greatest in terms of what he has achieved. He’s equalled the championships, he’s won more races, he has a lot more pole positions so I think he’s done everything you can ask for.”

“It was pretty obvious that he was going to win it but it’s incredible,” said the Red Bull driver. “He’s a very, very strong driver, of course also today.

“He’s I guess now the greatest driver in Formula 1, in terms of stats anyway. But a great result also for the whole team as well. Of course, there have been so, so dominant. So they really deserve it.”

Daniel Ricciardo was impressed that despite the 2020 season being shortened from 22 races to 17, Hamilton had still managed to win the world championship with three rounds to spare.

“Seven titles, also with a shortened season and three races to go, it’s like dominance. So congrats to him,” said Ricciardo.

“‘Congrats’ is not really enough but I don’t know what else to say. It’s pretty spectacular.”

32 comments on “‘Greatest of our era’, ‘statistically the best’: Hamilton’s rivals hail his seventh title”