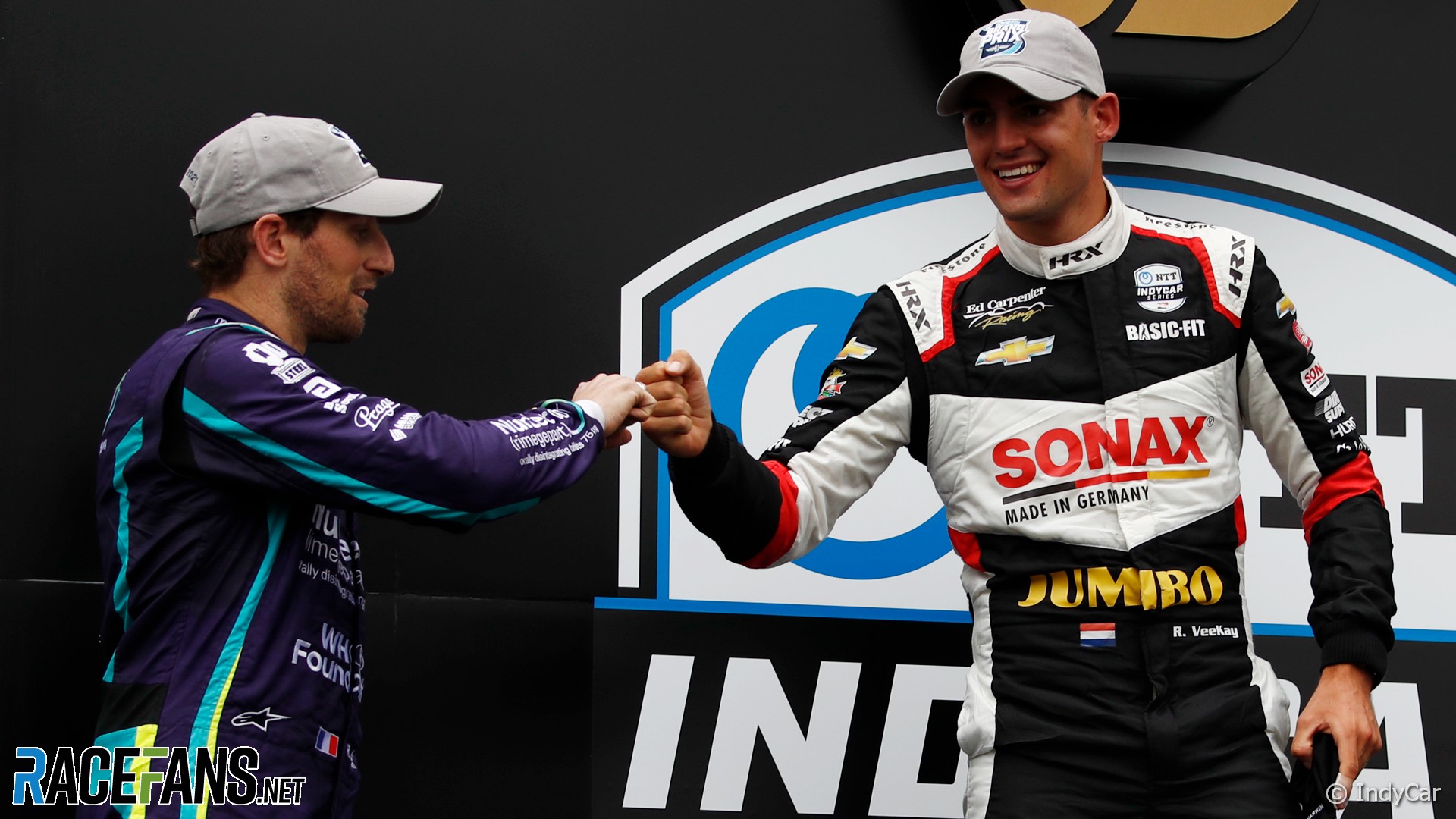 A first-time race winner has been crowned for the third time this season, with a fifth different winner in as many races in the 2021 IndyCar series – as 20-year old Rinus VeeKay claimed his first career victory at the Indianapolis Motor Speedway, winning the Grand Prix of Indianapolis on Saturday ahead of pole-winner Romain Grosjean.

Grosjean led the field away from the front row, leading 44 laps in the first half of the race and surpassing his 10-year career total of laps led in Formula 1. But it was following the second window of pit stops where VeeKay, who started seventh, asserted himself at the front of the field. VeeKay made his second pit stop on lap 36, undercutting Grosjean by seven laps.

With his used set of alternate compound tyres up to temperature, and with Grosjean losing time having to work much harder to put the likes of Takuma Sato a lap down than he’d have liked, Veekay was easily able to find his way past Grosjean to take the race lead for the first time on lap 49. Stringing together three blistering stints on the red sidewall tyres, VeeKay never looked back, claiming his first career victory by a margin of 4.95 seconds.

With this victory, Ed Carpenter Racing claims their first victory at the Indianapolis Motor Speedway, and ends a win-less drought of nearly five years since Josef Newgarden triumphed for them at Iowa Speedway in 2016. VeeKay becomes only the third driver from the Netherlands to win in IndyCar, succeeding Arie Luyendyk, and Robert Doornbos, the most recent Dutch IndyCar winner – back at the 2007 Champ Car Grand Prix of Mont-Tremblant.

Grosjean had to settle for a second-place finish, the first podium of his young IndyCar career. This marks Grosjean’s best result in single-seaters since finishing second in the 2013 United States Grand Prix, and his first podium since the 2015 Belgian Grand Prix.

Barber Motorsports Park winner Álex Palou finished in third, scoring his third career podium and his second of the season, ahead of Newgarden in fourth. Graham Rahal completed the top five in a fine recovery drive, after suffering minor damage in a lap one, turn one incident that brought out the only full-course caution of the race when Conor Daly was left stranded in the grass. Daly, who started sixth, retired after 50 laps due to damage sustained from contact with Simon Pagenaud.

It was also a bitter day for Jack Harvey, who was Grosjean’s closest challenger early in the race – until a burst tyre and a subsequent drive-through penalty relegated him to a 23rd place result.

Simon Pagenaud, Alexander Rossi, rookie Scott McLaughlin, Scott Dixon, and Marcus Ericsson completed the top ten finishers in order, with Dixon maintaining his lead in the championship standings by 13 points going into time trials for the 105th running of the Indianapolis 500 in two weeks’ time. Palou holds second in the points, ahead of Newgarden in third, Patricio O’Ward – who finished in 15th today – holding onto fourth in the table, Rahal in fifth, and with his maiden victory, VeeKay moves up five positions into sixth in the table.