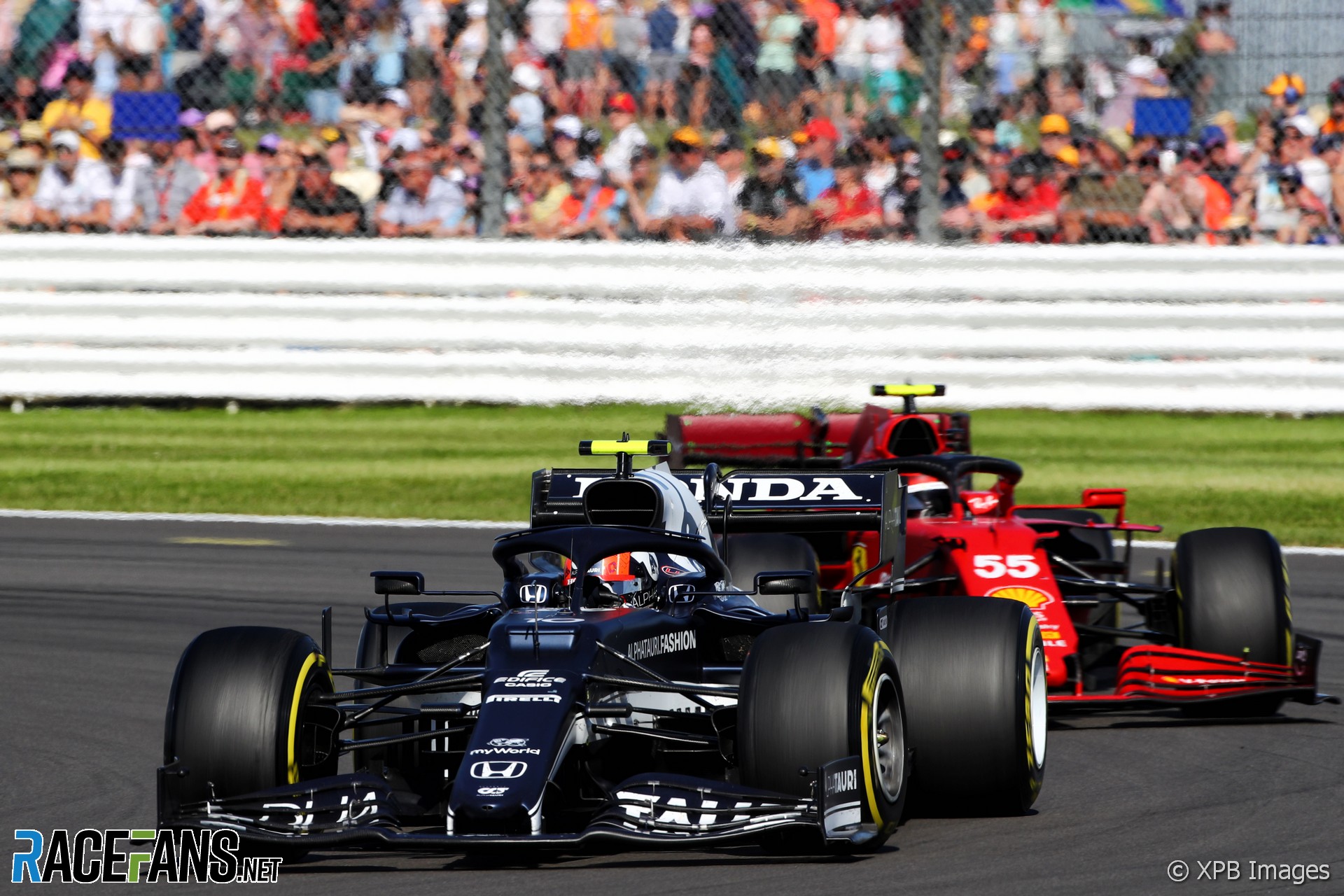 In the round-up: Pierre Gasly suspects gravel caused his puncture at the end of the British Grand Prix.

Gasly was running in ninth place until he was forced to pit on lap 47 of the British Grand Prix, after suffering a left-rear puncture. He suspects gravel dragged onto the track by a rival caused the failure.

“Honestly, I have no words because it was such a hard weekend. We were in the points five laps to the end and then, I don’t know, someone went off in turn seven and then we had a puncture and I had to box with five laps to go because the rear left was punctured.

“Honestly, it’s so frustrating because, as I say, it was one of the most difficult weekends of the season and we managed to make it back to the points and in the end, to lose by nothing, just for a puncture right at the end is very frustrating.”

Verstappen released from hospital without injuries

Late on Sunday Red Bull issued a statement confirming Max Verstappen has been released from hospital, after being taken for further checks following his 51G crash at Copse on the opening lap of the British Grand Prix.

“We are pleased to confirm that Max was released from hospital at 22:00 this evening, following a thorough medical examination, without any major injuries.

“Max and the team would like to thank the trackside Marshalls and medical staff for their exceptional care both on-site at Silverstone and in Coventry Hospital.”

Fernando Alonso described the British Grand Prix as Alpine’s best for pure pace since his return to Formula One.

“[It was] very busy, we never have an easy race. We are always in different battles at different times of the race.

“But yeah, I think it was a strong weekend. We’ve been in the points for the last four or five races.

“Our best result was Baku, P6, but it was a strange race so today, P7 is probably our strongest weekend on race pace. I’m happy for that. It was a difficult race for tyre management with a lot of blister concerns and we managed quite well and delivered a good result.”

Kimi Raikkonen said that the limited pace of Alfa Romeo means the only kind of racing he can do is defensive, rather than looking for opportunities to move forwards.

“In the end, I’m watching more mirrors than forward all the time. Yes, the race is purely for trying to defend.

“We need to be faster. And, you know, we tried and I’d rather fight for the position than just finish 11th or 12th, it makes no sense.”

Cleared from the hospital after all the checks were ok. Thank you to everyone for all the nice messages and best wishes 🙏🏻 pic.twitter.com/zBlfbQ8uh4

Brave place for the move but this time Lewis didn’t back off anymore. Hopefully Max is just shaken and not injured. #BritishGP

My gripe with the move is that LH wasn’t going to make the apex of the corner. Max squeezed him up to the entry which I’m ok with given the lead car is allowed to dictate line choice, then gave LH plenty of room for 2-wide through corner, LH washed up into him.

"Racist messages including 'monkey emojis' and other racial slurs were sent as replies to a post by the Mercedes team on Instagram celebrating Hamilton's success."

"Shwartzman: 'It is not that I am more confident than before, it’s that I have become more patient. Coming here, we knew what we had to do to deliver. We didn't have the pace today, so P5 was the maximum that we could have done. It’s important to maximise every single race because every point counts.'"

"Behind Christodoulou and Clark, Louka St-Jean made it an all-Canadian podium by picking his way through the crashes to finish third. Bryson Morris also rose up the order to finish fourth on his debut. However these impressive results were cancelled out by less than one full lap of green flag running being completed in the the 10-lap race, and as a result it lost championship status."

In all the debate about what could (or even should) have been in Verstappen and Hamilton’s battle, Charles Leclerc’s own fight – with his power unit – is easy to forget. Adunlucas asks if Hamilton could have got the win, had Leclerc not suffered engine cut-outs?

Leclerc lost some two seconds from the problem itself. Later they put the engine on a conservative position just to be safe. They wouldn’t do it in normal circumstances.

His time improved by half a second a lap when they went back to full power, if we think that he lost 0.3s a lap for 20 laps would be six seconds.

Surely Lewis wouldn’t even try to close if Charles were performing better and with a bit more advantage (as I put above, eight more seconds maybe). It’s a pity. He and Ferrari deserved the win.
@adunlucas