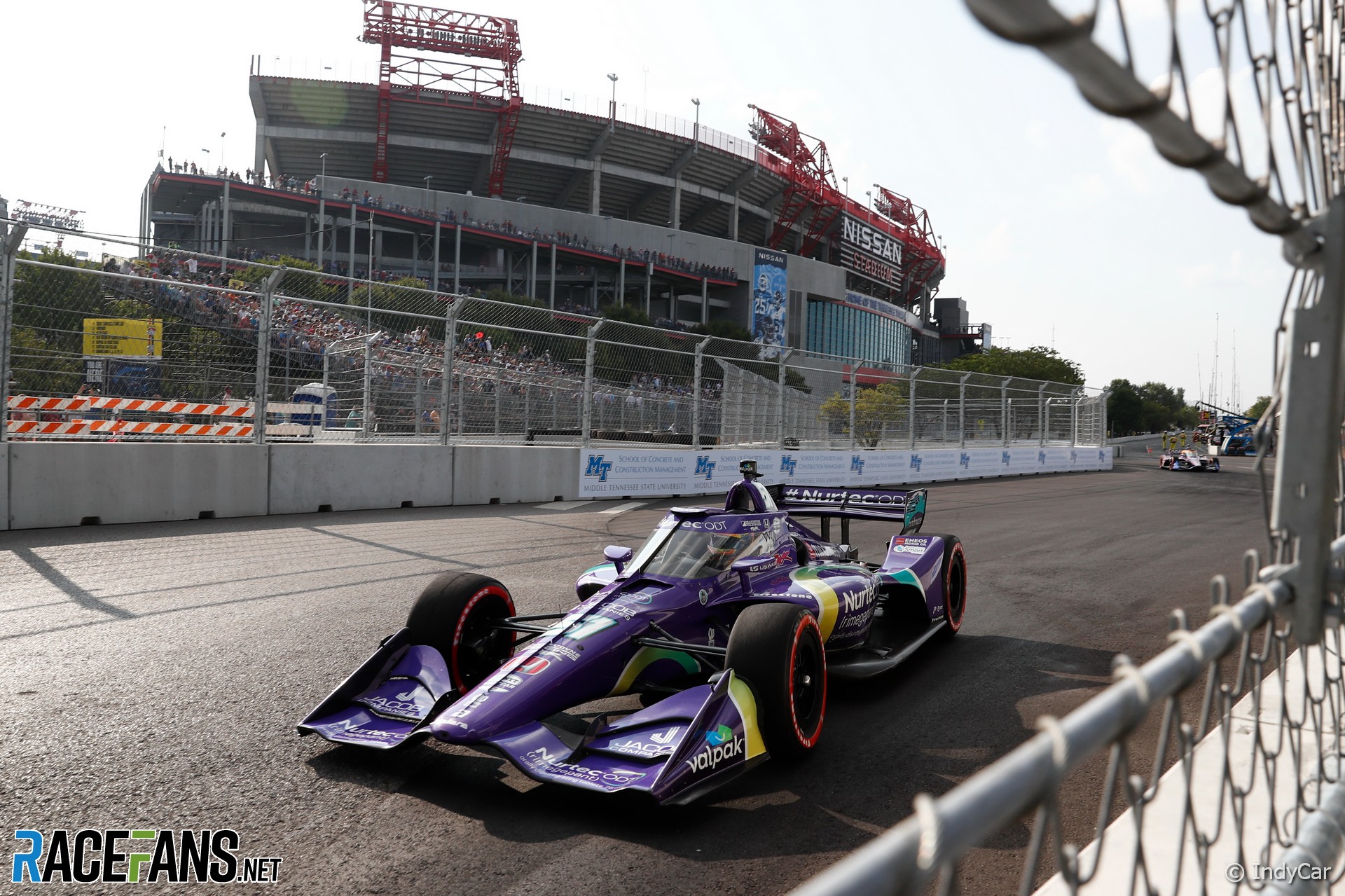 In the round-up: Romain Grosjean says he had the pace to win after leading an IndyCar race for the third time last weekend but finishing 16th.

Grosjean “had the pace” to win in Nashville

Romain Grosjean said he was quick enough to win last weekend’s IndyCar race in Nashville after qualifying fifth and leading the race, but rued the string of caution periods which turned the race into a lottery.

“We had some pace, we were up there with the top guys, we led a few laps,” said Grosjean. “But with all the yellows you needed to be lucky to win and that’s what happened today and for us, we didn’t get lucky.

“So it’s a bit of a tough one to digest because we had the pace, we were fighting at the front but we didn’t get the yellows that we needed.”

For their first time at a race my kids saw my leading. How cool is that ???
❤️❤️❤️

Sponsor offers for @Ericsson_Marcus ‘s plank must be rolling in.

They finally got our seats built. pic.twitter.com/ksqnzgfs2S

Turn 6 at Road America. This is how F1 tracks need to be configured to end the constant debate about, “exceeding track limits,” green grass will do it for you, Grip tends to go down alarmingly on grass! What a concept. pic.twitter.com/Swq92lStXS

"A spokeswoman said the Frenchman left by mutual agreement in early July."

Ricciardo brands 2021 the toughest year of his career (Speedcafe)

"I think it’s the first time I’ve consistently found it difficult. For sure over the years you have bad weekends, and even you might have two bad ones on a trot, but then you kind of get it right where I feel like it’s been definitely more bad, or more or less impressive than good."

"Today, the sum of €42.9 million still owed for the circuit is proving the main stumbling block for the development. The investment group Atitlan, which owns much of the land, and the British fund Hayfin Capital are negotiating with Valencia City Hall over how the project should go forward, according to sources from the department of urban planning."

"We had quite a difficult start to the season, unfortunately, we didn’t have the best of luck at the beginning. I mean the puncture in Barcelona, then we had several technical issues in the following races, there were some mistakes from my side as well, so it was far from ideal – let’s say."

'The competition's fierce but we can do something special in Berlin,' says Jaguar's Sam Bird (Formula E)

"I'm closer to the title fight now than I was when I was behind JEV (Jean-Eric Vergne) going into the season four finale. So, I take comfort and positivity in that."

Ryan Newman: "Being from South Bend and spending a lot of time in Indy, I would personally much rather it be on the big track and not the road course. Honestly, I’d prefer it to be on the dirt track instead of the road course on top of that."

Bob Jenkins, legendary voice of Indy 500, dies: 'He was one of us in every way' (Indianapolis Star)

"That a kid obsessed with cars whizzing at 200 miles an hour got to eventually be the 'Voice of the 500' and work in IndyCar and NASCAR for ESPN and NBC Sports, was always a wonder to Jenkins. 'I always have been and am now a race fan who got lucky,' Jenkins told IndyStar in May."

"Patch 1.06 is out now on PC and PlayStation, and coming to Xbox very soon."

I’ve regularly sang the praises of IndyCar on this forum, but yesterdays race highlighted its negative aspects.

The circuit was a brave attempt to create something amazing, but ultimately it fell short. The surface was just too bumpy even by IndyCar standards and some sections of the track were guaranteed to make accidents. The driving standards were appalling. So many clumsy moves and so many full course yellows meant that anyone could win.

I felt so sorry for Herta. He was head and shoulders above anyone else all weekend and the fact he didn’t win is a travesty. IndyCar need do do some head-scratching.
Biskit Boy (@sean-p-newmanlive-co-uk)