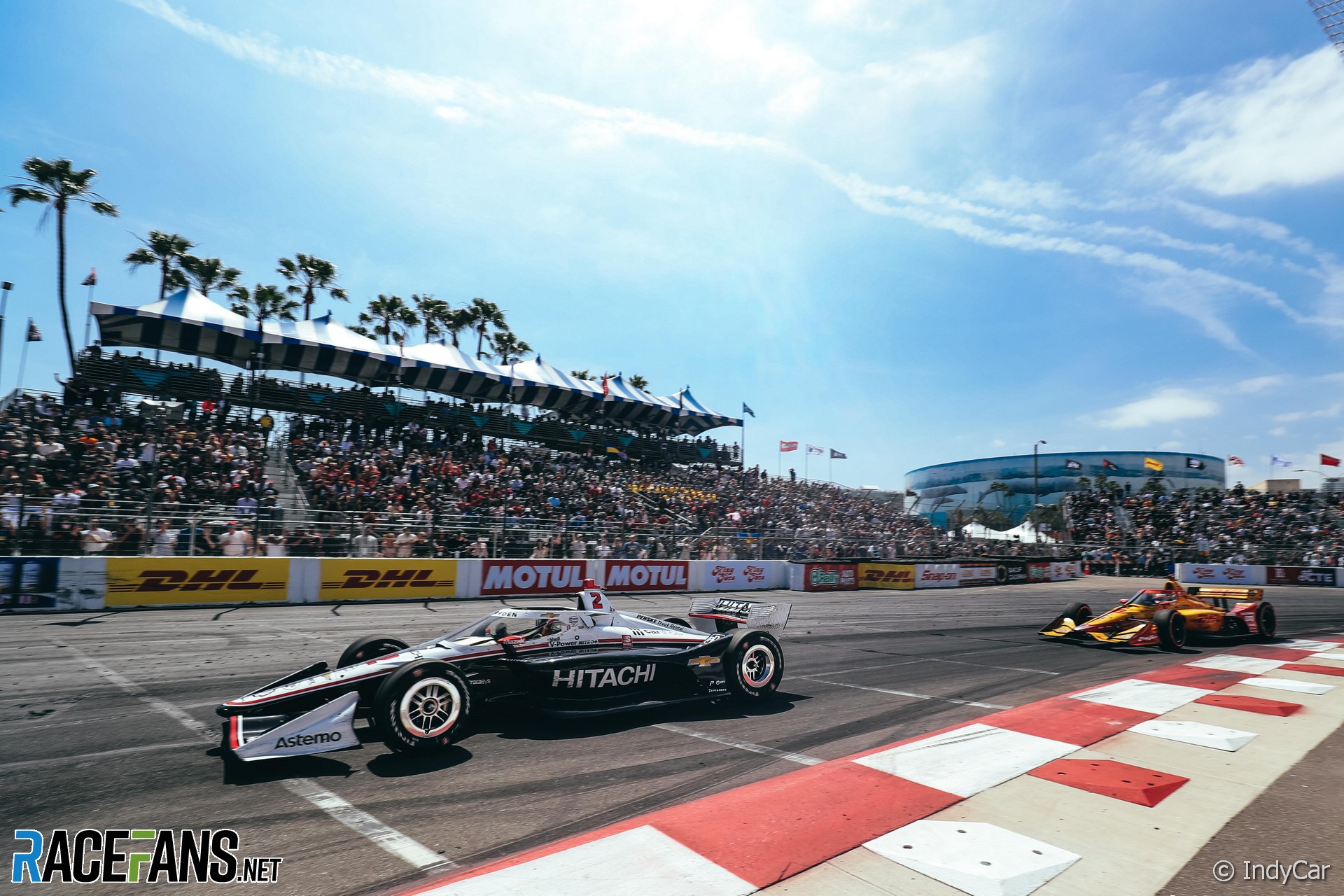 Josef Newgarden withstood pressure from Álex Palou and Romain Grosjean to win the Grand Prix of Long Beach, after pole sitter Colton Herta crashed out of the race that he’d led early on.

Newgarden’s brace of victories also takes him to the top of the championship standings after three races, as his Penske team mate Scott McLaughlin struggled to a 14th place finish.

Herta led the 26-car field from the first lap, aiming for back-to-back Long Beach victories. The first full-course caution came on lap six, when Dalton Kellett locked up his tyres and slammed into the concrete barrier at turn one. Kellett was just the first of a number of drivers that would crash out of the race over the course of the day: Rookies Devlin DeFrancesco and Callum Ilott also had race-ending contacts with the wall which knocked them out of the race.

The lead changed hands after the first cycle of pit stops. Palou made his first stop on lap 27, and he was able to undercut both Herta and Newgarden to take the race lead – as Newgarden was able to get past Herta by pitting one lap later.

Palou pitted from the lead on lap 55 but on the following lap Herta’s race came to a screeching halt when he drove in too fast into turn nine, locked his wheels, and clattered into the wall. The race remained green as Herta pulled his terminally damaged car off the track.

At the same time, Newgarden made his second pit stop and thanks to the work of his Penske crew he was able to exit the pits just ahead of Palou. The second caution came out on lap 60 for a bizarre accident in turn three: Takuma Sato and Simon Pagenaud made contact, sending Pagenaud spinning off into the foliage in front of the Aquarium Fountain. Rinus VeeKay checked up behind them, and was hit from behind by McLaughlin – who’d already spun earlier in the race after clipping the inside wall at turn 11.

On the ensuing restart, Marcus Ericsson was behind Newgarden and Palou – but he smacked the wall coming out of turn four, and as he tried to get off the track, he collected team mate Scott Dixon behind him.

Grosjean took over third place, and as the only leader on the softer alternate compound tyres, he got past Palou for second place and started to pressure Newgarden for the lead.

With ten laps to go, Jimmie Johnson spun and crashed at turn eight, collecting rookie David Malukas and bringing out the third caution. The race restarted with five laps to go, Newgarden and Grosjean had exhausted their 200 seconds of push to pass available, but the peak of Grosjean’s tyres had begun to slip just enough to allow Newgarden to keep Grosjean at bay.

A final-lap caution for Sato crashing at turn eight sealed Newgarden’s second straight win of the season, his first at Long Beach in ten career starts. Grosjean records his first podium as an Andretti Autosport driver, and Palou held onto third.

Will Power finished fourth, ahead of Pato O’Ward, who got his first top-five finish of the season. Dixon went from 16th on the grid to sixth, despite the run-in with Ericsson. Graham Rahal finished seventh, and Alexander Rossi was eighth after a slow pit stop.

The IndyCar Series returns in three weeks, travelling to Barber Motorsports Park in Alabama on 1 May.