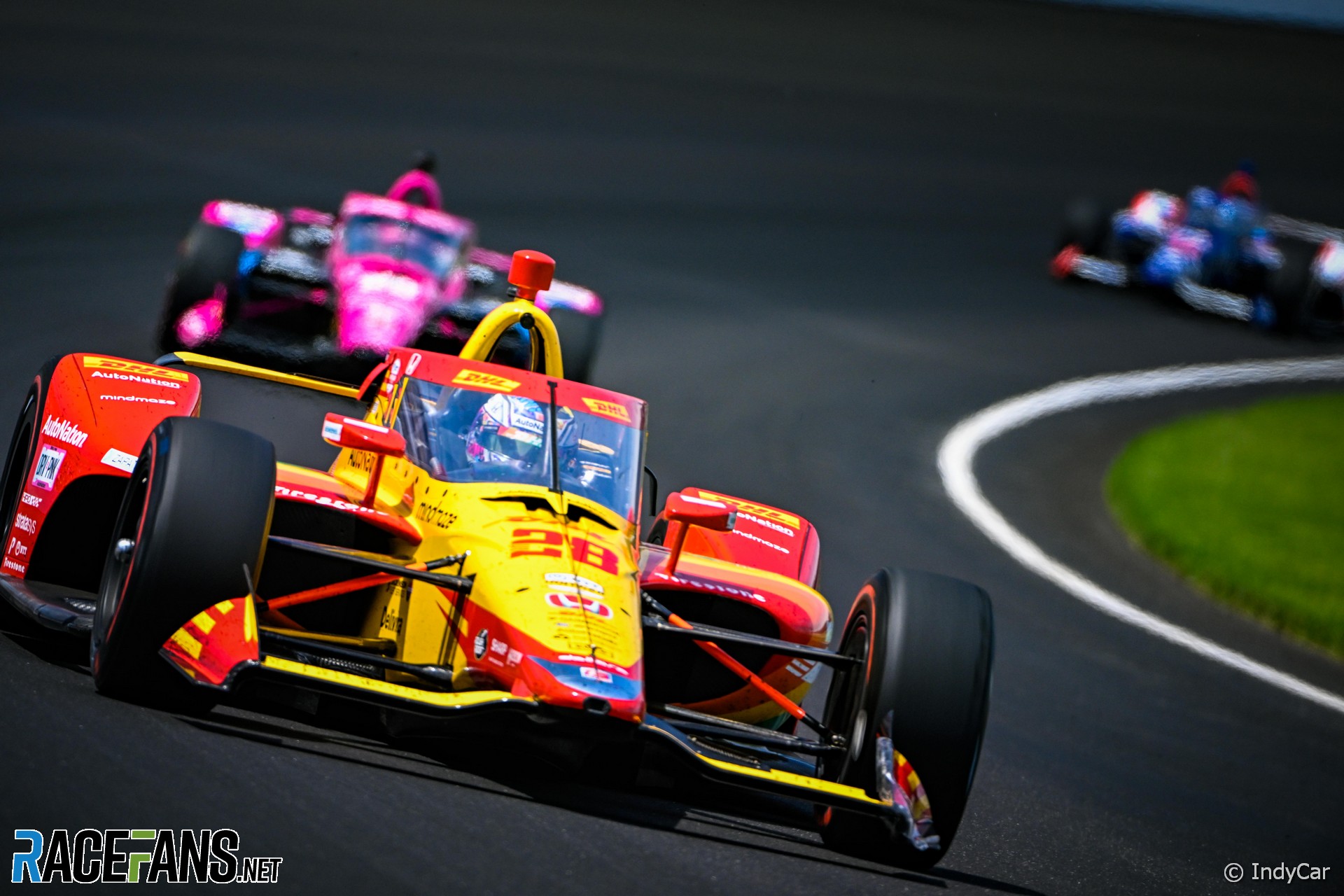 All seven rookies in the 2022 edition had difficult races, to varying degrees.

That included the two ‘super rookies’, a pair od drivers with years of high-level racing experience prior to making their debuts in the race: Romain Grosjean and Jimmie Johnson both crashed out.

Formula 1 veteran Grosjean ran only the road and street courses in his rookie season last year, plus the short oval at Gateway Motorsports Park.

Last weekend he was fastest Indy 500 rookie in the field – he qualified ninth, the only Andretti Autosport driver to make the second day of time trials. But Grosjean fell out of the top 10 early in the race and was running 17th when he crashed out of the race on lap 106, hitting the wall at turn two.

After being released from the infield care centre, Grosjean admitted he was at a loss to understand the race-ending crash. “The car spun,” he shrugged. “I don’t know why.”

“No warning on that corner, no issue – it was actually really good in one and two. Three and four was a bit more tricky, but in one and two it was pretty good.”

“I wasn’t expecting anything bad in that corner,” he added, “and obviously I spun without any warning.”

Grosjean wasn’t the only Indy rookie with F1 ties that was struck by the wind gusts at turn two that caught several drivers out. Callum Ilott’s race came to an end when he crashed at the same spot on lap 69, then skidded and hit the inside barrier. He was released from the medical centre, with his right hand and wrist wrapped in bandages.

“It was a bit of a hard hit,” said Ilott, “and then I hit again on the inside. But, [I’m] all okay, they checked me over and, obviously, a little bit of an issue with the right hand.”

“But we’ll see how it is in a couple of days. Big thanks to the safety team, obviously the safety barrier as well. But I’m sorry for the team as well, because it wasn’t running too bad up until then.”

The two rookies were in good company: Rinus VeeKay crashed out at the same corner early on. And the other ‘super rookie’ in the field, seven-time NASCAR champion Jimmie Johnson crashed at the same spot, having got within six laps of the finish before he and nearly, inadvertently, put team mate Marcus Ericsson’s chances of winning in jeopardy.

“Track position was way more important than I thought it would be, and I struggled to really advance through the field,” said Johnson, who faded from 12th on the grid and slumped outside the top 20 before his crash. “And then, sadly, the car got away from me at the end of the race, and I had a big crash there in turn two.”

But being able to take part in the race was a dream come true for Johnson, the 47-year-old who was voted as the 2022 Indianapolis 500 Rookie of the Year by a panel comprised of IndyCar and Indianapolis Motor Speedway officials, as well as members of the media.

“I really loved my experience here, and I’m so happy for Chip Ganassi Racing and Marcus Ericsson, winning the race.”

On social media, Dale Coyne Racing quipped: “We all know that David Malukas is the actual Indy 500 Rookie of the Year. Maybe actually finishing the race needs to be part of the criteria.” The message was signed with the hashtag, “Once again we were robbed,” a reference to Ed Jones losing out on the honour in 2017, despite finishing third, to two-time Formula 1 world champion Fernando Alonso, who also retired from the race.

After completing his first Indy 500, Malukas was more relieved to have made it to the end. “We finished. We finished the race, it was everything I wanted. I wanted to finish, and be the highest finishing rookie, and we achieved both of those things today. I’m very happy.”

“I’ve now realised why people say that this track chooses its winners. Because there’s so many different things that can happen, and everything just needs to go your way for three hours straight. So, there’s a lot of possibilities.