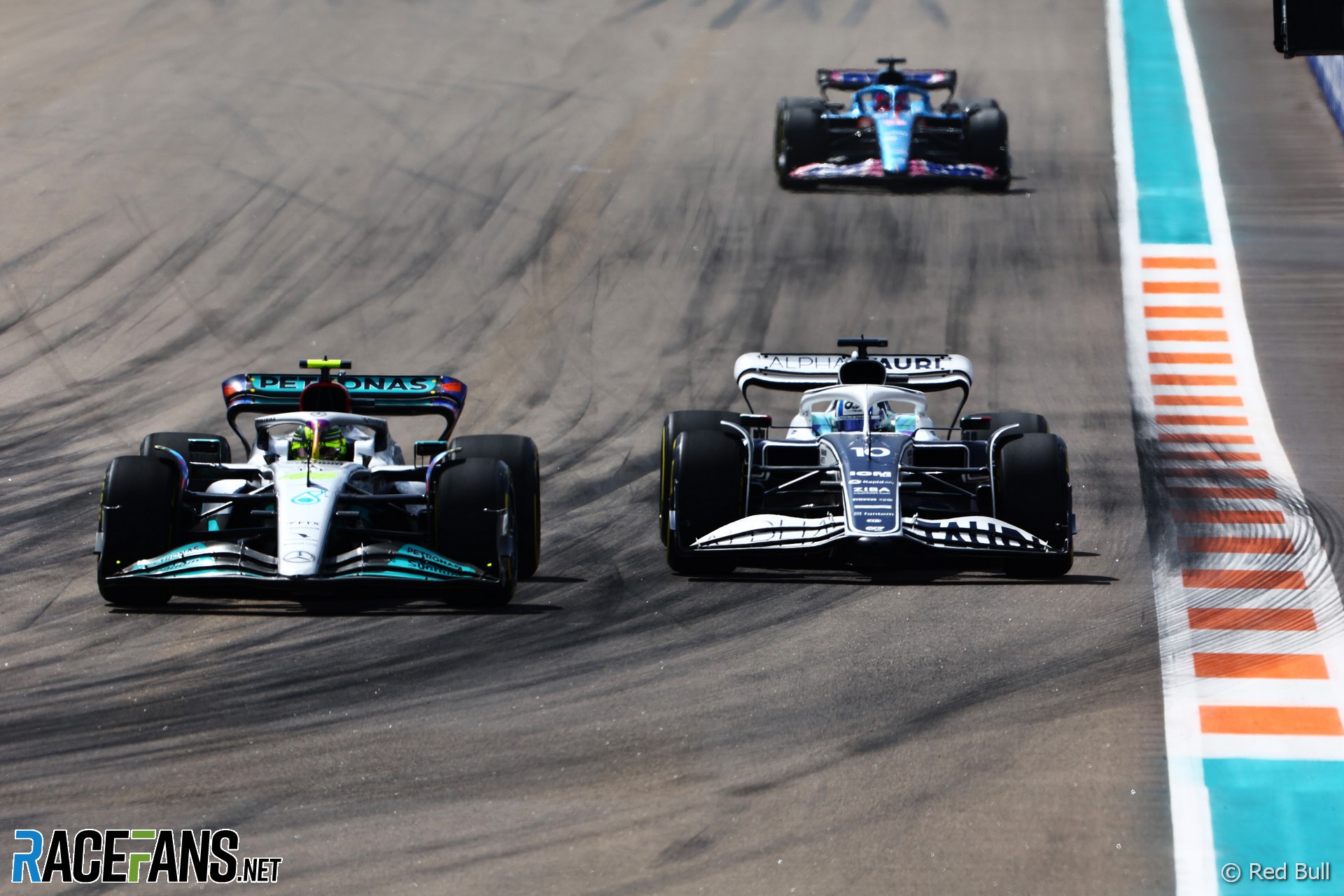 In the round-up: Pierre Gasly is disappointed the changes to Formula 1 cars for this year doesn’t seem to have put more of an emphasis on drivers’ performances.

Gasly says this year’s Formula 1 field appears to have spread out under the new technical regulations rather than gotten closer.

New rules for this season were introduced to try and improve racing, but have seen Ferrari and Red Bull dominate the season, with Mercedes a distant third place. Gasly says he is disappointed that the top two teams have such an advantage over the rest of the field.

“I expected the field to close up together – which I think happened in the midfield,” Gasly said. “I think if you look from fourth fastest to probably the last position, actually, I think we really all bunched up quite a lot.

“But the top three is a different world. Even last year, I got excited many times because I could out-qualify Ferrari, sometimes Red Bull, sometimes Mercedes – I felt like these top three, they were faster, but they were not in such a different league that you could tease them sometimes. This year, there’s no way.

“There’s clearly like a big step between – only Bottas can challenge them at times. But they are on their own, and we’re literally fighting for seventh. Which is a bit sad, because clearly the target was to close.

“So I hope whatever solution we can find for the coming years because that’s the target and that’s what we’re all pushing [for] as drivers. We want drivers to have a bigger impact and input on the end result.”

Grosjean caught out by red tyre degradation in Detroit

Romain Grosjean admitted that he and his Andretti team did not anticipate how fast the red tyres would degrade during Sunday’s Detroit Grand Prix at Belle Isle.

Grosjean tried a two stop strategy having started from 12 on the grid, but suffered heavy tyre wear on the softer red tyres and had to pit a third time near the end of the race, finishing 17th.

“We tried a different strategy but the red tyres fell off much faster than we had anticipated and that put us on the back foot,” Grosjean explained.

“We tried later to push hard and make up some ground but we lost too much initially. We will analyse it all and come back stronger in Road America.”

Following an MRI scan today , I’m very happy to say I will be racing in Baku. I’ve been taken care by specialists the last few days to treat my injury which was serious and needed proper treatment. There might still be moments of pain but it’s now safe for me to race.

Honestly surprised I was able to drive with this right hand and even fight for a top 10. Not the finish we wanted but nonetheless a unreal race and strategy by the @AJFoytRacing team. pic.twitter.com/fpj0PNMFWU

Pretty cool graph. Nice work
Reminds me how terrible I was on the reds 😱🙈💩 https://t.co/h2h0fkz74y

Thank you for your patience 😉

this is really cool – road rallying, driving skill tests and other stuff you can do with basically no barrier to entry, if you've got a car and a driving license. motorsport is hard to participate in or find events if you don't know people already so this is a great initiative https://t.co/YgrZIk4d3n

"Nasdaq represents speed and innovation…just like IndyCars." 🏎
#Indy500 winner @Ericsson_Marcus reflects on his recent @IndyCar win, ringing the @NasdaqExchange bell and the importance of having a strong support system. pic.twitter.com/jXPovZWgOe

‘I’ve not forgotten how to drive’: Daniel Ricciardo hits back at critics after poor start to 2022 F1 season (The Independent)

"The reality is I’ve not forgotten how to drive in six months, I haven’t lost my competitive edge; it’s just kind of a moment in time that I knew I could come out of. You are always going to get people saying this and that. It is what it is, it’s up to me in the car to prove them wrong."

"Some people have come out in support of the bid, namely McLaren Racing CEO Zak Brown and Alpine CEO Laurent Rossi. But there is a feeling elsewhere within F1 that the Andretti brand on its own is not enough and that the family needs to partner with a car manufacturer not currently in F1 to make it sufficient."

"Following the scrutineering carried out at the end of the second race of the Formula Regional European Championship by Alpine at Paul Ricard, the Prema Racing car of Dino Beganovic was found to be non-compliant."

"I'm not a fan of leaving the Americas. I think Mexico would be a great location. We're already in Canada, but I think it's pretty hard to be a domestic series that occasionally goes global. I think you either gotta be global or domestic. Otherwise, you don't get enough exposure to kind of, you know, dip into Europe once a year or Australia like we used to go to."

"It's a Cosworth-designed 4.0-liter, naturally aspirated V12 that makes 654 horsepower and revs to 12,100 rpm. That last bit's important because, as its revs climb to that stratospheric red line, the GMA T.50 sounds like an F1 car on the road."

"Why is Daniel called the Honey Badger? And why did he pick the number 3? Find out as our Aussie answers Google's most searched questions."

Looking back at Lewis Hamilton’s start to the 2022 season, @Neilosjames sees two Mercedes drivers in very different phases of their careers.

It’s an interesting one between one driver climbing towards his peak and another declining away from his (personal view, other brands are available).

I’d say Russell’s had a touch more consistency and a lot more good fortune, while Hamilton has put in the only genuine stand-out performance from either of them. Not a huge amount between them, and the points don’t paint an accurate picture. Whoever ends up on top, I just hope the car comes good sooner or later and they can fight for wins rather than the minor points.
@Neilosjames