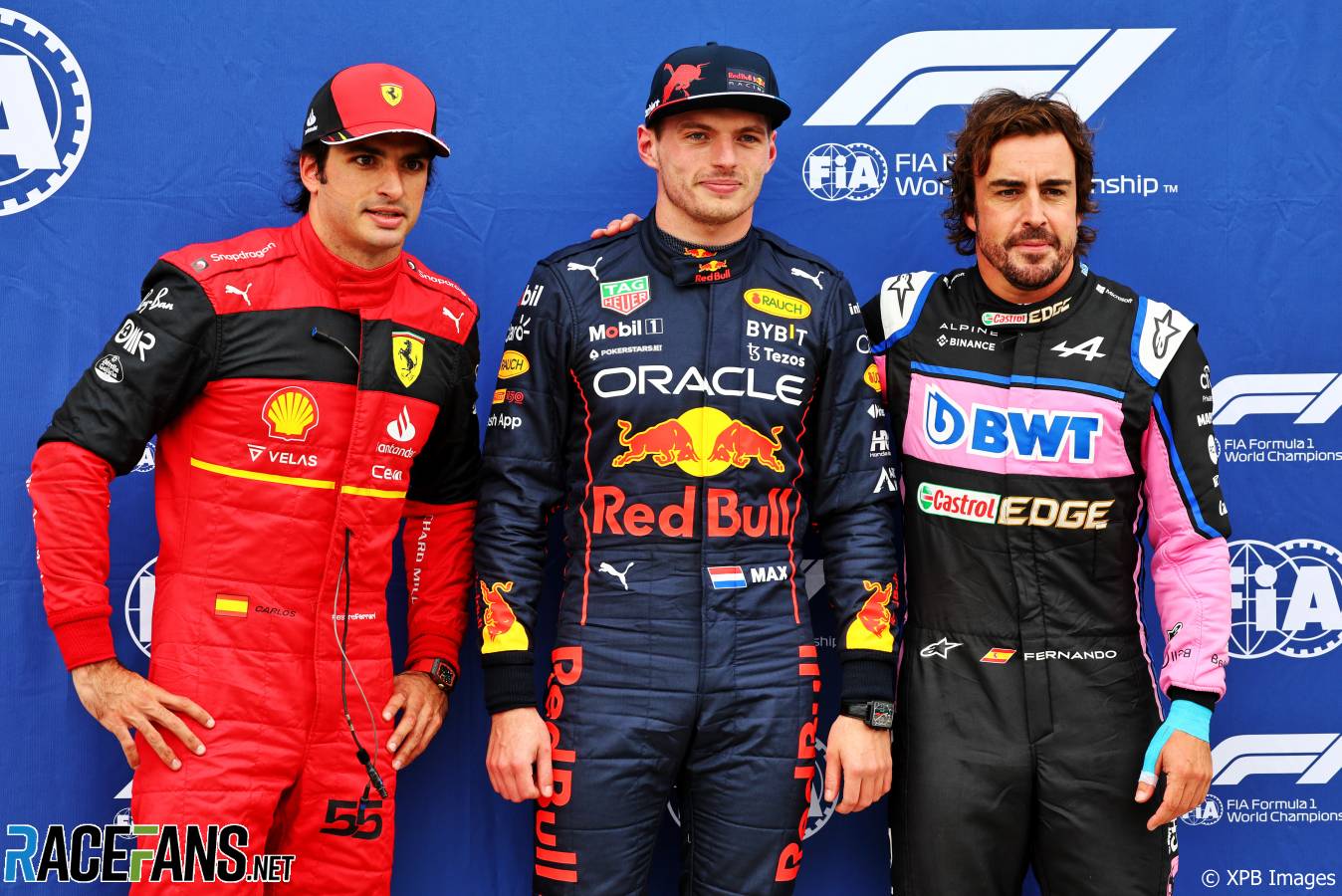 In the round-up: Despite his closest championship rivals Sergio Perez and Charles Leclerc starting outside the top 10, Max Verstappen does not anticipate an easy victory from pole position in Montreal.

After claiming pole in Montreal Verstappen said he “still expects it not to be a straightforward race” today. He will start alongside Fernando Alonso with Carlos Sainz Jnr third, Perez 13th and Leclerc 19th.

Although he questioned on his radio why his team did not get him out on track later in Q3 to benefit more from the drying track, he praised the job Red Bull did managing the rain-affected session.

“Today, with the tricky conditions, we stayed calm, we didn’t make mistakes and we had the right calls in Q3. So of course I was super happy with that, to get pole position here and also to be back in Montreal, it’s good to see all the fans.”

After Otmar Szafnauer said Alpine plan for Oscar Piastri to be racing in F1 in 2023, Williams boss Jost Capito confirmed that the Formula 2 champion is under consideration for their line-up next year.

“Oscar is ready to go into Formula 1,” said Capito. “And I think that’s one of the list for sure.”

The team hired former Red Bull reserve driver Alexander Albon last year, but Capito stressed that deal was done with the driver directly. “We didn’t do a deal with Red Bull on Alex,” he said, “we did a deal with Alex on Alex though.”

Shortfall at McLaren is car, not drivers – Brown

McLaren Racing CEO Zak Brown said he and Daniel Ricciardo agree about the need to improve results at McLaren after his comments about the driver’s performance were widely reported.

“I was asked the question and I just gave an honest answer,” Brown said. “I think Daniel has said the same thing. We’re here to to try and get towards the front, we’ve had some awesome weekends like Monza and then some disappointing weekends.”

Both McLaren drivers need more competitive machinery, said Brown. “I don’t think we’re yet giving our drivers a car that’s capable of being at the front on a regular basis. So we need to do that.”

Brown said he and Ricciardo “have got a great relationship and I just gave an honest answer to the question of how things are going and things could be going better, but we’re going to work hard and make sure that they are that in the future.”

Ricciardo’s victory in last year’s Italian Grand Prix proved he was capable of delivering if McLaren give him a good enough opportunity, said Brown. “Daniel’s shown like he did at Monza last year, when we give him a car that suits his driving style and his pace, he’s going to go out and and lead laps and win a race.

“I think we need to have a car that’s a little bit more performance and user-friendly and he’ll get the job done.”

Frederic Vasseur says that keeping the French Grand Prix in the south of the country is a priority for the region, after Formula 1 CEO Stefano Domenicali told media a new race in Nice was a possibility.

“I’m not aware of the project,” admitted Vasseur. However, he said that “I know that Christian Estrosi, the mayor of Nice, is a big, big fan of motorsport and he’s trying to find the best solution to keep the grand prix in the region.”

Vasseur added it would be peculiar to situate a street race in France so close to Monte-Carlo. “It would be strange to have two street circuits, one in Nice and one in Monaco but we could do a big one and just with whatever,” Vasseur suggested. “But for sure they are pushing like hell to keep the French grand prix in the south of France.”

"Latifi: 'I don’t remember word for word, but I know the general theme of what I was saying: ‘Why are we still out here? There’s nothing to play for here. We’re just circulating here for no reason.’"

"'If they keep going like this then it will affect their health. It is not healthy to keep smashing your bones into the ground — it could be a stress fracture,' Jorgensen told Motor Sport. 'We could see within the season a fracture on the spine and we will see a driver out for two months or so.'quot;

Kosinski 'That’s exactly the approach for Formula One … to shoot at the real races and real cars and capture it. It’s going to be a huge challenge but an exciting one for me.'

"'The agreement involves a minimum of five first races (F1 season openers) over the 13-year period between now and 2035, including the opening race of the season in 2024 and 2025,' Pakula said."

"'I think the most revealing part of that series ... was just sort of understanding the real team effort behind it,' Janik said. 'Seeing these teams put everything they can to eke out thousandths of a second and just perform at this superhuman level, I think that's really what sold me.'"

The smile of a man who knows his time as a garage cut away has 14 weekends left at most. pic.twitter.com/A8eYl5j2jz

When @alex_albon wants to be heard, but not seen…

He sends out his performance coach Patrick 😅#CanadianGP #F1 pic.twitter.com/9ThYZsAlB1

Andrea Kimi Antonelli went on a brilliant fifth to first charge to win in Italian Formula 4 at @circuitspa.

The @MercedesAMGF1 junior told Formula Scout how he handled a tricky race against his @PREMA_Team team-mates in the heat 🔊 pic.twitter.com/X7umYWLZPQ

A lot of the concern about the 2022 regulations has been to do with teams raising or lowering the ride height or adjusting the car’s stiffness, Ben points out that the other major change to the way the cars run has been the move to 18-inch wheel rims:

So I am not going to say the floor aero is not mainly responsible but how about the tyres being much thinner. We could see the flex of these before in all directions that must make a huge impact on what is transduced to the chassis/driver.

We can easily notice changes on road cars, never mind on a race car. Does anyone think going back to smaller rims could improve this situation?
@Dubaemon