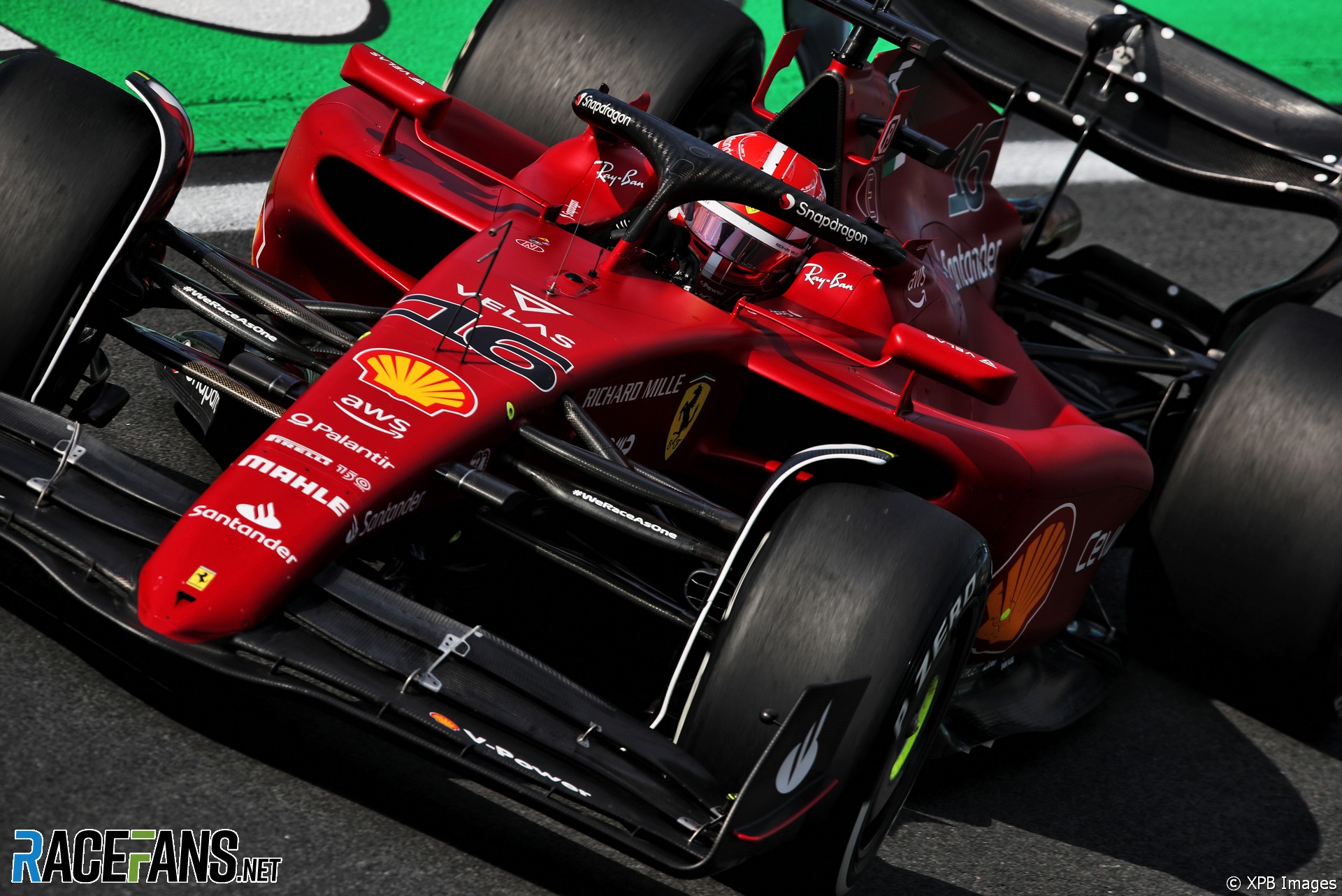 Charles Leclerc and Carlos Sainz Jnr were quickest in second practice for the Dutch Grand Prix as Red Bull appeared to struggle for pace at Zandvoort.

Just four-thousandths of a second separated the two Ferraris, with Lewis Hamilton less than a tenth behind them in his Mercedes. But Max Verstappen managed only eighth in the session, almost seven-tenths off Ferrari’s pace, and team mate Sergio Perez was even further back.

With the afternoon sun breaking through the clouds, the Zandvoort circuit was significantly warmer than the morning practice session. Having lost 50 minutes of running with a suspected gearbox, Verstappen quickly headed onto the circuit, going instantly quickest with a 1’13.465 on the soft tyres ahead of the two Ferraris of Sainz and Leclerc on mediums.

Traffic was once again a problem for all cars around the narrow, Fernando Alonso having one of his earlier laps ruined by a slow car at Masters, turn eight. Less than 10 minutes into the session, official GPS location data appeared to fail, and many teams warned their drivers they were unable to give them information about their rivals out on the circuit. That led to a lull in the action as drivers returned to the pits, with only Alexander Albon choosing to run.

Eventually, more drivers took to the circuit. The Ferraris headed out on softs, with Sainz taking the fastest time. Just after halfway through the session, Leclerc jumped to the top of the times, a mere four-thousandths of a second quicker than his team mate. They remained in that order until the end of the session, the Ferrari pair leading Hamilton, Lando Norris and George Russell. The Red Bull drivers focused on long runs, but Verstappen and Perez appeared unable to match the times of the Ferraris and Mercedes ahead, Verstappen seven-tenths of a second slower than Leclerc’s best time.

With just over 10 minutes remaining in the session, Yuki Tsunoda brought out the red flags when he spun and beached his AlphaTauri at the exit of turn 10. The marshals successfully cleared the stranded car out of the gravel with enough time for the session to resume with under five minutes to go.

Verstappen attempted a flying lap in an effort to improve his position, but could do no better than eighth. There were no major improvements at the top of the times, leaving Leclerc and Sainz on top of the times as Friday’s running concluded.

Hamilton was third fastest, less than a tenth behind the Ferrari, with Norris splitting the two Mercedes with Russell fifth. Lance Stroll ended the day sixth in the Aston Martin, with Verstappen sandwiched in eighth by the two Alpines of Alonso and Esteban Ocon. Daniel Ricciardo completed the top ten, with Perez only 12th fastest in the second Red Bull.