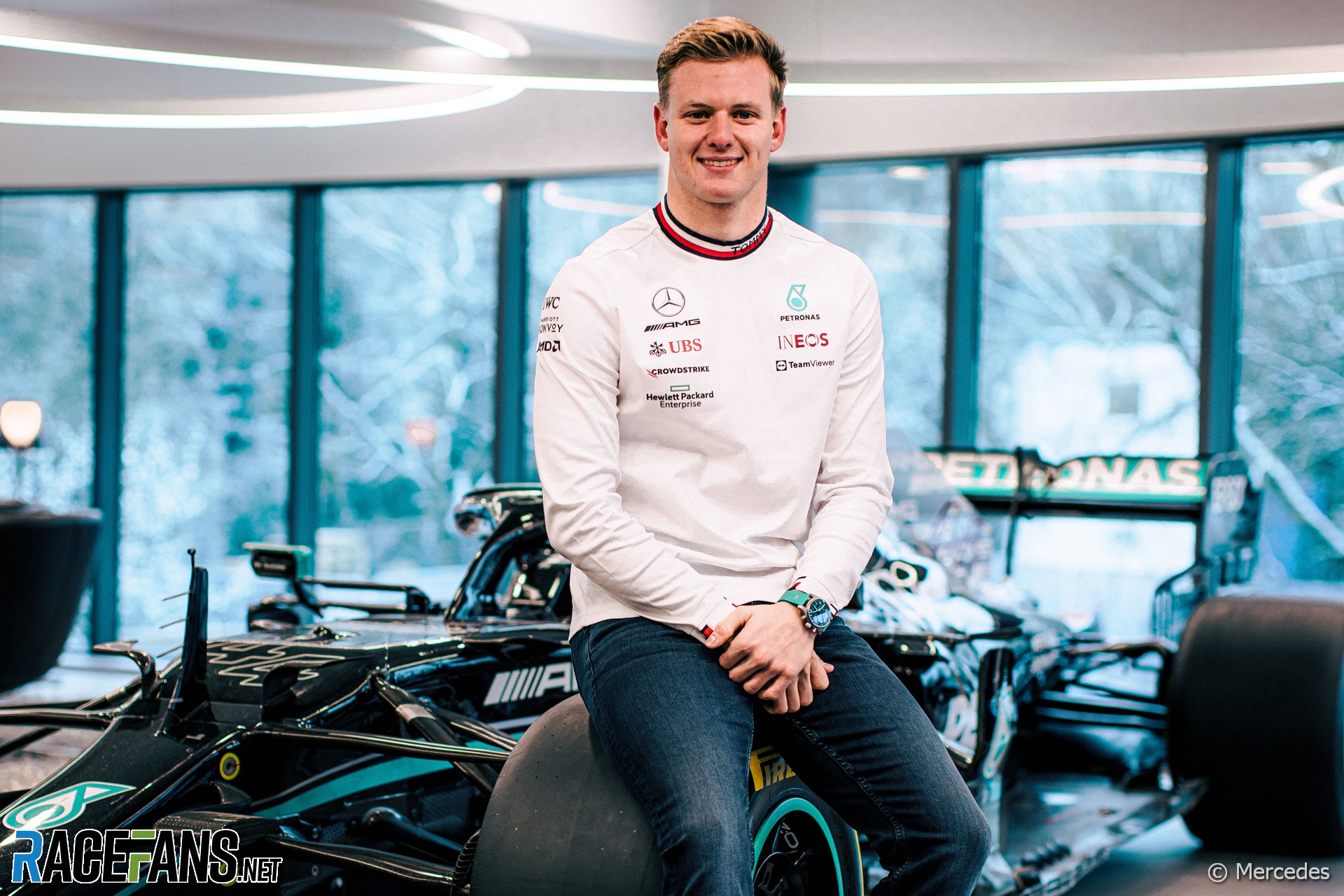 In the round-up: Mick Schumacher can prepare himself for an F1 return through his work at Mercedes, says the team principal Toto Wolff.

Mercedes team principal Toto Wolff believes Mick Schumacher could earn a “permanent seat” back in Formula 1 if Mercedes help to develop him as their reserve driver.

Schumacher raced with Haas in 2021 and 2022 but was dropped by the team for this season. Mercedes signed him as their reserve driver to replace Nyck de Vries, who has taken a race seat at AlphaTauri. Wolff says Schumacher has the potential to earn a second chance racing in Formula 1.

“I believe if we can give him a safe environment to to further develop, he can be a good racing driver in a permanent seat in the future,” Wolff said.

“In the same way we have let Nyck de Vries go in order for him to achieve a career, that could be something that could happen to Mick – whether it is in our team or letting him go somewhere else, we don’t know at this stage. Where he will massively contribute is that he’s driven the new car for a year and has been in Formula 1 for two years… he will be super helpful in the simulator and in assessing the car overall. It will be good to have him on track and in the debriefing room.”

No date set yet for Frijns return

Abt Formula E driver Robin Frijns is unsure when he will be able to return after suffering multiple fractures to his left hand and wrist in a crash during Saturday’s race at Autodromo Hermanos Rodriguez.

“Had a five-hour operation as my hand was fractured in several places,” he wrote on social media. “Will travel home soon and will start my recovery. Early days to say when I am back but I will be back soon!”

The next race takes place at the Diriyah circuit Saudi Arabia on January 27th.

Williams junior driver Ollie Gray will compete in the 2023 FIA Formula 3 championship in 2023 with Carlin, the team has announced.

Gray was runner-up in last year’s British Formula 4 championship to Alex Dunne, taking two race victories and 16 podium finishes. Williams confirmed that Gray would make the step up to FIA Formula 3 with the Carlin team.

“Throughout his first year as part of our Driver Academy, Ollie’s shown his talents on the track with numerous wins and podiums and while at Grove where he’s worked with the team,” Williams’ sporting director Sven Smeets said. “We look forward to supporting his development in 2023 and seeing what he can achieve in F3.”

A new documentary on the career of four-times Formula 1 world champion Alain Prost will arrive later this year. The series, consisting of four 45-minute episodes, is being created by French broadcaster Canal+, but there is no word yet on whether an English-language version is planned.

How a 'T-shirt maker' became F1 champions (RaceFans via YouTube)

Benetton’s Formula 1 rivals looked down on the fashion label when it started its own team. But they won in their first season and took one of the sport’s greatest champions to his first two titles. Here’s their story.

"Although tickets are already available online, the organisers accommodated by the state government have not yet built four foot over bridges (FoBs) and 15 galleries. The authorities are yet to figure out how to halt the stench emanating from the lake when the event unfolds."

Inspiring the next generation (McLaren)

"Following a fantastic first year and an incredible response to the McLaren Racing Engage programme, we have increased our investment and sponsored seven new students as part of The Smallpeice Trust’s Arkwright Engineering Scholarship programme."

"Carlos Sainz Snr confirmed he suffered a double back fracture as a result of the crash which ended his participation in the Dakar Rally. The 60-year-old rally legend, dad of Formula 1 star Carlos Jnr, took part in the world famous rally event this month. But he was unable to complete the rally, as he was forced to retire from the event after a hefty crash which rendered his Audi out of action. "

"A late bloomer who started karting in his late teens and made it to the pinnacle of motorsport, where he managed not to disgrace himself, unlike some pay drivers with more experience. Childish nicknames of ‘Goatifi’ aside, here’s why Latifi deserves more respect than some give him."

"Looking at it now, the way things go on during the season, there is quite a lot of frustration because we missed the teams’ title at the very last race of the year by a very small number of points. We lost so many points at the beginning of the season because performance was not there. We could have finished up P4, P5 even P6 but, at the end of the day, when you're not champion it's not changing your life where you end up."

Formula E's Gen3 Leader on the New Technology: 'It's a Huge Challenge' (Jalopnik)

"This is the first single-seater car to have a front powertrain. This allows us to have up to 600 kW in regeneration compared to 250 in Gen2; almost 50 percent of the energy used during the race will come from regeneration. That’s one of the key technological features of this car."

"The team in Brixworth design, manufacture, assemble, analyse and run the F1 power units. It’s Hywel’s job, as managing director, to support this talented group of people in delivering the best PU possible."

What's cooler than being cool? LH in Antarctica ❄

Today, in front of the whole team, we unveiled a bronze bust in honour of our late shareholder and long-time friend, Mansour Ojjeh.

Thank you for all you did for this team, Mansour. We miss you. pic.twitter.com/bK8hHaQ4PR

We would like to express our heartfelt condolences on the passing of John Wickham, who was involved in the founding of the "Spirit Team" that sparked the second phase of Honda's F1 activities. pic.twitter.com/UqmSRphZZw

Can’t wait for my first Daytona 24 Hour, starting with the Roar before the 24 this weekend! Looking forward to working with everyone at @TOWERMTSPRTS8 in LMP2! pic.twitter.com/fh4F6gR1kr

As the Virtual Le Mans 24 Hours demonstrates how simracing is becoming gradually more exclusive as time goes by, Alan Dove is not surprised…

This was all quite predictable, and I warned some folk about it during 2020. I could see simracing making exactly the same mistakes karting made (around 1996-2007 when Hamilton made it big). By creating a subservience to the likes of F1 you actively participate in the cultural destruction of your own sport.

Now simracing can’t complain too much because to some degree it relies upon real-world counterparts to act as a way to create prestige within its own events (I am being very generalistic here with regards to who simracing is, but have to for simplicity sake). You can’t criticise the major IP holders who start to ask who exactly is using their brands and events and for what purposes, and you can’t blame them for how they construct these types of events. The money wouldn’t be there to put into production if they had to rely upon the splits system iRacing uses. It’s not Le Mans responsibility to try and kindle simracing culture.

Live For Speed has probably been the best simulator to maintain cultural identity because the cars and tracks, bar a few exceptions, are largely fantasy. The developers of that have always had their heads on their shoulders though and do things very differently to everyone else. But if major sims rely upon real-life counterparts to create their big events, then maybe those who are part of the culture should rethink how they do thing because you’ll always be at the whim of the IP holders.
Alan Dove