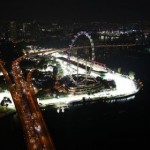 Going to the Singapore Grand Prix at Marina Bay.

Where to sit and where to watch at Singapore?