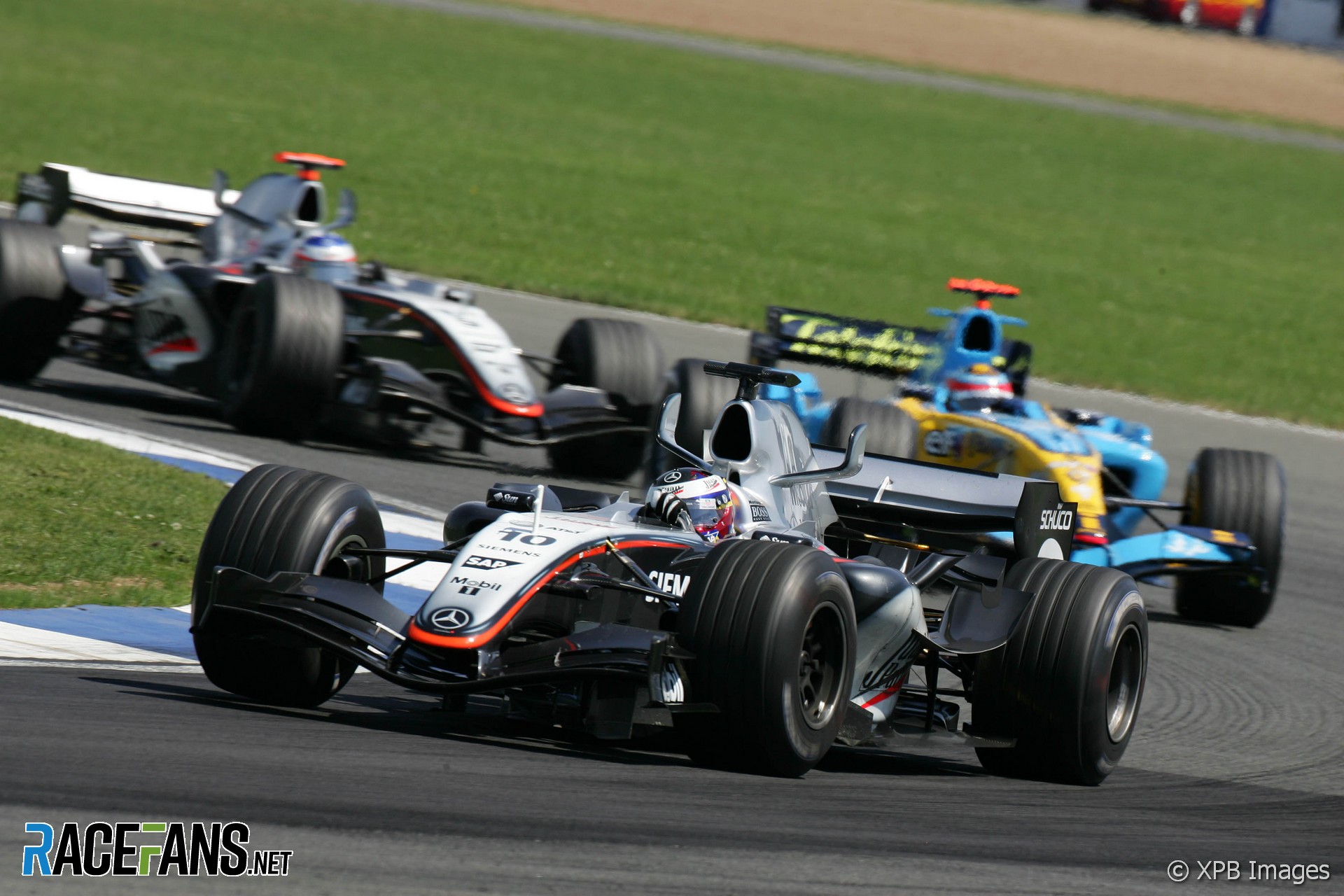 Juan Pablo Montoya broke his 2005 duck and took his first win for McLaren in fine style. But a second consecutive weekend troubled by engined failure for Kimi Raikkonen stymied his assault on Fernando Alonso’s championship lead.

The final practice session for the British Grand Prix had barely begun when the number nine McLaren-Mercedes of Kimi Raikkonen coasted to a halt. The lack of any visible smoke suggested that this was not an engine problem – perhaps a repeat of Montoya’s hydraulic failure in France. But no, this was an engine problem, and so for the second race in a row Raikkonen would be put back ten places on the grid.

Thus the die was cast for a race that, on the strength of practice alone, should have been a McLaren benefit. Except now Raikkonen’s qualifying position would be compromised to an even worse degree than team-mate Montoya, who would be punished for his French DNF (also a mechanical failure) by running fifth in qualifying.

Toyota had looked fast over single laps but consistent race pace continued to elude them. Home favourite Jenson Button was, too, just shy of the ultimate pace.

Renault were given an opportunity to seize and it was taken by – who else – Fernando Alonso, who set the pole time despite running with more than anyone bar Raikkonen (second fastest, dropping to twelfth) and Michael Schumacher (tenth fastest after an off at Stowe, which would become ninth).

Button, buoyed by massive Silverstone support, put the BAR on the front row of the grid by dint of Raikkonen’s misfortune. But the real story of qualifying was Montoya’s scintillating lap that placed him a handy-looking third.

It looked even handier as the five red lights went out on Sunday and Montoya catapulted past Button and up to the outside of Alonso at Copse. Alonso gave him a sliver of racing room and Montoya squeezed through.

Montoya could not sprint away from Alonso in the early laps, and the two pulled away only gradually from Button, tending to suggest that Alonso’s true pace was being contained. But Raikkonen’s certainly was. He had leapt from twelfth to eighth behind Schumacher who, ironically, was being smartly contained by the same Jarno Trulli who had verbally lambasted the German for refusing to support the drivers’ stance on Indianapolis.

Schumacher held back – he never really looked like putting a move on Trulli, while Raikkonen scrambled frantically in search of an opportunity. His best shot came after the lap three rolling restart, owed to Takuma Sato’s stalled BAR, but a twitch of oversteer at Becketts thwarted his attempt at a run at Schumacher down the Hangar straight where, under braking into Stowe, he would later prove massively quicker than the Ferrari. Ahead, Montoya led Alonso, Button, Rubens Barrichello and Giancarlo Fisichella.

The new aerodynamic regulations were making their presence felt once again, even at this more overtaking-condusive venue than Magny-Cours. Alonso pressed Montoya and readied himself to leap past during the pit stops. Sure enough, Montoya pitted one lap before Alonso, but the Spaniard was delayed lapping Jacques Villeneuve and David Coulthard. Emerging from the pits Montoya roared back up alongside and through into Maggotts, exactly has he had on lap one. Status quo resumed.

Further back, Barrichello made his first of three stops which – surprise, surprise – dropped him behind his team mate. Button capitalised, but Fisichella jumped the pair of them.

Trulli, Schumacher and Raikkonen stopped in that sequence and thus resumed in reverse order. Raikkonen caught up to the Montoya – Alonso battle at the end of his first stint and even smartly passed Alonso into Stowe – but, sadly, it was the last they saw of each other.

The race was quickly beginning to peter out – Montoya edging away from Alonso, especially in traffic, Fisichella holding station, Button being reeled in by Raikkonen. Reliability across the field was nearly faultless – Sato got going again and the only DNF was Narain Karthikeyan – his team mate Tiago Monteiro was classified for a remarkable 12th time.

Montoya had a significant gap to Alonso when he made his final stop, but Alonso stayed out for a crucial four laps longer. Once again it would be a hair-raising sprint into Maggotts, but Montoya ahead more comfortably this time. Thing did not go so smoothly for Fisichella, though, who again stalled in his final pit stop, for which he blamed the car. This allowed Raikkonen through to third and up onto the podium.

The moods of the two McLaren drivers after the race could not have stood in more stark contrast. Montoya, jubiliant, vindicated; Raikkonen, disappointed, regretful, foiled again, spoke of his fear that his championship hopes were fading. He now trails Alonso 77-51.