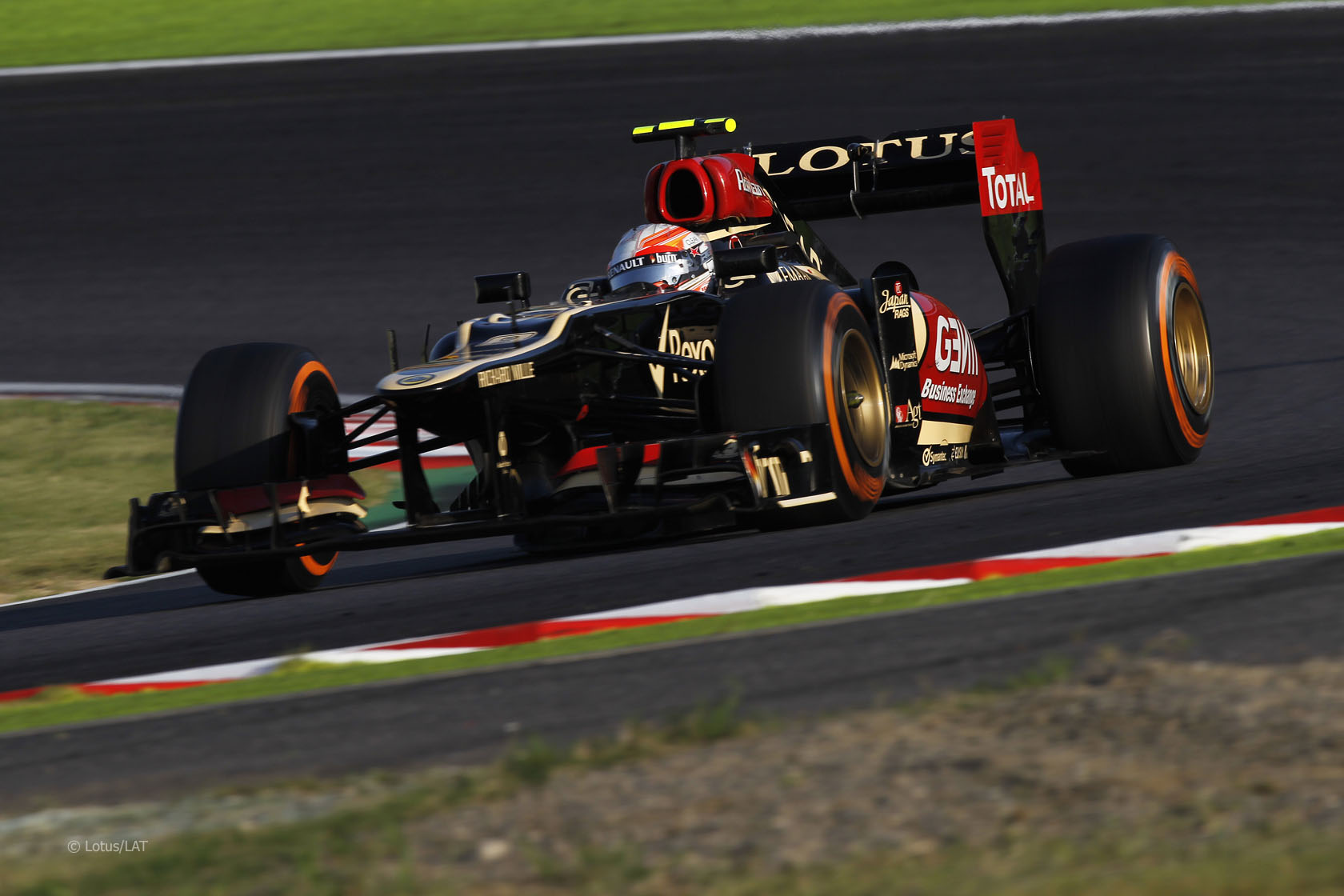 Romain Grosjean topped the Driver of the Weekend poll for the Japanese Grand Prix, collecting more than double the votes of race winner Sebastian Vettel.

Grosjean led a large portion of the race after a remarkable start saw him take the lead from fourth on the grid.

Vettel was voted among the top three drivers for the ninth time this year. Esteban Gutierrez featured in the top three for the first time this season after scoring his debut points in Formula One.

That leaves just six drivers who haven’t featured in the top three all season.

Another solid qualifying performance from Grosjean put him right up at the sharp end and using this he was able to make full advantage of the Red Bull’s poor getaway – and Hamilton’s puncture – to lead into turn one.

Grosjean made himself a small gap but could never escape from the chasing Red Bulls. He lost the lead briefly when he pitted for the first time but resumed it as Vettel made his stop.

Grosjean drove superbly throughout the race but he never stood a realistic chance against the Red Bulls – especially with Vettel only two stopping – however he did manage to hold Mark Webber at bay for a number of laps.

Eventually however the stronger Red Bull forced it’s way through and Grosjean had to settle for third in a race where he showed he was the man capable of challenging the Red Bulls in the final few races of the season.

He got the most out of his Lotus in qualifying, made one of the best starts I?ů‘ťľ‘šůve seen in a while, led the race early on like it was business as usual and was the only one in the race to keep up with the might of the Red Bulls.
Nick (@npf1)

Out-qualified Raikkonen by at least five positions on the grid for the third race in a row and had a fantastic start. The strategy was perfect ?ů‘ťľ‘«£ in the end he was simply outwitted by Red Bull, nothing he could do about stopping the Red Bulls from overtaking him. Well-deserved podium.
andae23 (@andae23)

I don?ů‘ťľ‘šůt think he did a single thing wrong all weekend. Trounced Raikkonen in qualifying, had a fantastic start, and was able to hold that for a rather long time, until the superior Red Bull?ů‘ťľ‘šůs came hunting. I think he drove a better race than Webber, who in-turn drove a slightly better, but marginally so, race than Vettel.
PhilEReid (@philereid)

Vettel was denied equalling Hamilton’s run of four consecutive pole positions by his team mate on Saturday – although he was hampered with a KERS issue – then were jumped by Grosjean after making poor starts.

But Vettel used his two stop strategy to great effect, biding his time in the opening stints before pushing at the end to come out ahead of the three-stopping Webber and pass Grosjean.

Went for Vettel ?ů‘ťľ‘«£ he made his strategy work nicely.
David not Coulthard (@davidnotcoulthard)

Vettel for me. Very good effort in qualifying. Even without KERS, he was really close to his team mate.

His race was quite clever as well. He had a terrible start, but he carefully prepared his last stint after the first few laps. Some minor mistakes here and there, but in the end he had a better pace and better tyre management.
Yobo01 (@yobo01)

After two races of qualifying inside the top ten Gutierrez was disappointed with only 14th on the grid.

A solid start and mature race however led to his first points of the season – in an impressive seventh place – just one spot behind highly rated team mate Nico Hulkenberg.

I am going a bit different, Esteban Gutierrez. He took his first points by finishing in seventh! Amazing start from him, and great pace through the race and under pressure, after many thought he wasn?ů‘ťľ‘šůt delivering at all.

A great comeback from Sauber, and more so for Gutierrez who has reduced his gap to Hulkenberg in the last races.
the_sigman (@sigman1998)