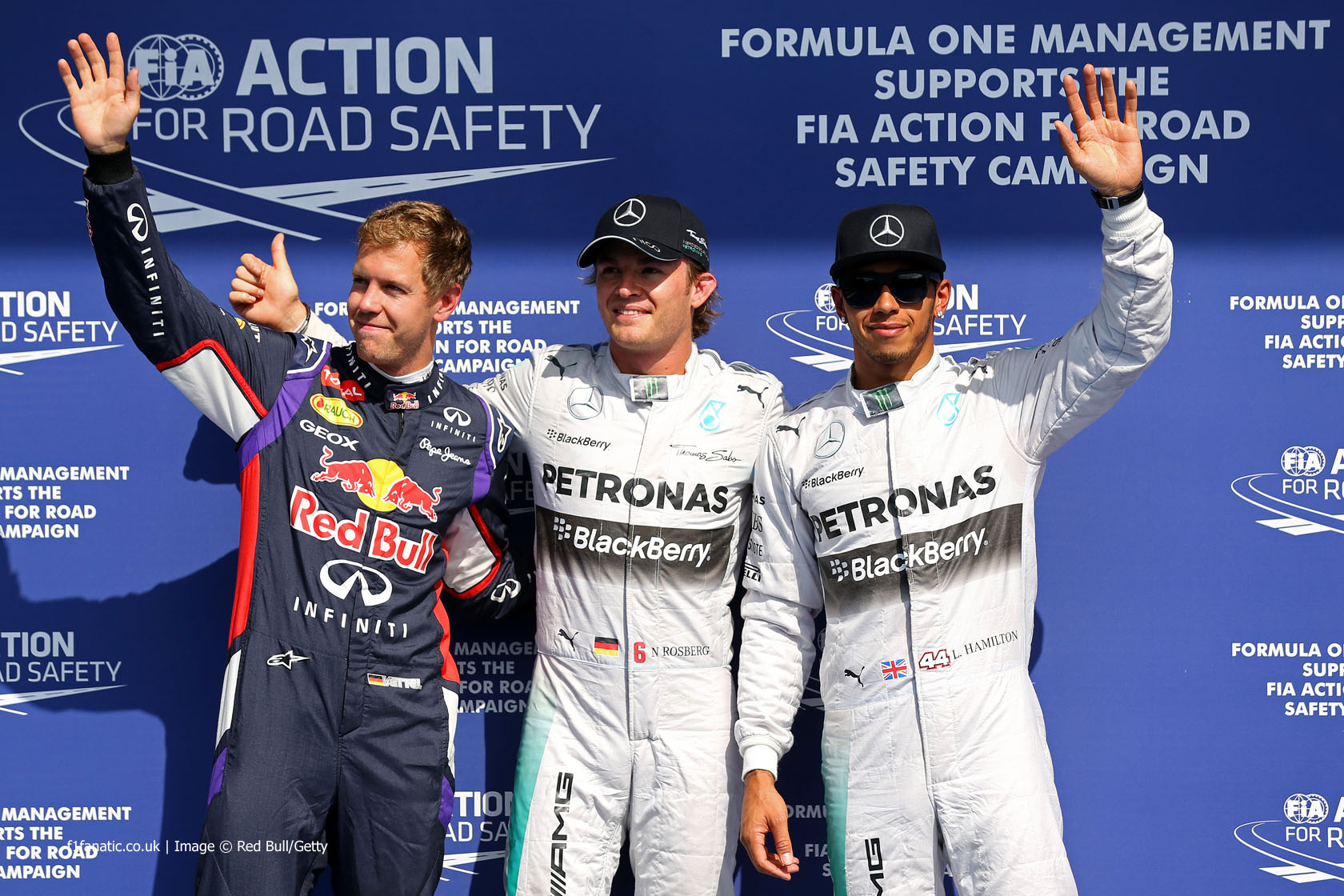 Nico Rosberg extended his run of pole positions to his fourth in a row in a tricky wet qualifying session for the Belgian Grand Prix.

Team mate Lewis Hamilton had to settle for second place after grappling with braking problems in Q3. Sebastian Vettel was best of the rest in third – but was over two seconds slower than the flying Mercedes.

A downpour 40 minutes before the start of qualifying meant the first competitive session of the weekend was held in the wettest conditions experienced so far.

The rain had stopped by the time the drivers joined the track, and with conditions uncertain most opted for intermediates while others opted for full wets. Valtteri Bottas was among those who took the full wets, and briefly headed the times while the track was at its wettest, before Daniel Ricciardo took the top time off him.

Once the Mercedes pair began lapping, however, the normal pecking order was resumed. At times they had as much as three seconds in hand over their rivals.

The contest to escape the drop zone was partly decided when Esteban Gutierrez came to a stop in Stavelot. He was already quick enough to out-qualify both of the Caterhams, and a late improvement by his team mate meant at least one of the two Saubers made it into Q2.

Sutil’s improvement pushed Pastor Maldonado down into the drop zone, the Lotus driver having spun at the chicane. His final effort left him six-thousandths of a second faster than Nico Hulkenberg, who was eliminated in Q1 for the first time this year in his Force India.

That meant Jules Bianchi took his Marussia into Q2 once again. Team mate Max Chilton had lost charge in his battery at the end of the session.

Fresh rain fell as the second part of qualifying began but the order at the top remained unchanged – the two Mercedes drivers continued to show everyone else the way, Hamilton over 1.8 seconds faster than the next non-Mercedes, which was Fernando Alonso’s Ferrari.

Having made it into Q2 Bianchi progressed no further, ending up 16th behind Romain Grosjean, who spun at the La Source hairpin.

Kevin Magnussen’s final lap jumped him into the top ten at the expense of his team mate. However Button found enough time with his final run to join his team mate in Q3.

That left Sebastian Vettel in the drop zone and also needing to make big gains with his last run. He made it – moving up to seventh – and was the last driver to escape the drop zone.

Into his place fell Daniil Kvyat, who spun in the Les Combes complex after taking his hand off the steering wheel.

Hamilton’s bid to claim his first pole position since the Spanish Grand Prix went awry when he found his car was pulling to one side while braking in Q3. Heading into La Source at the beginning of his first lap he ran wide, losing time.

While Rosberg put up a benchmark pole position time which was two-and-a-half seconds faster than Vettel could manage with his first run, Hamilton only just managed to get within seven-tenths of a second of his team mate with his second lap.

It also meant he would only have time for one run on his final set of tyres, while Rosberg would have two. It turned out he only needed one, as Hamilton’s brake problems persisted on his second run, and he ran wide again at La Source and Stavelot. It left him shy of Rosberg’s time again, and Rosberg then posted a further improvement to put his pole position far beyond doubt.

Vettel stayed third while team mate Daniel Ricciardo took fifth despite going off at Blanchimont. Alonso also had an off-track moment but separated the Red Bulls for fourth.

52 comments on “Rosberg masters tricky conditions for pole at Spa”