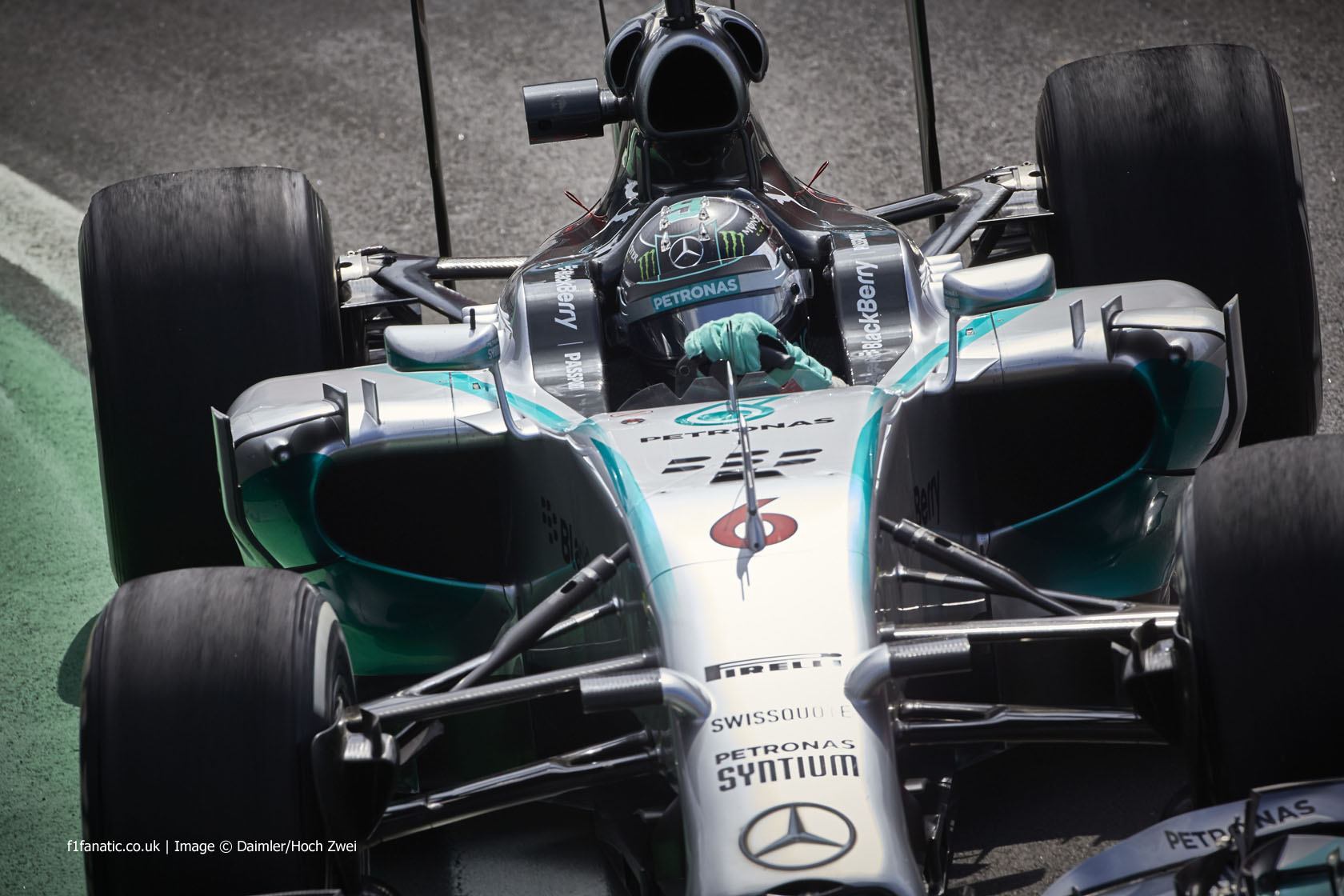 Nico Rosberg completed a clean sweep of practice and qualifying sessions as he set pole position for the Brazilian Grand Prix.

The Mercedes driver took his tenth pole of the season which confirms him as the inaugural winner of the FIA’s Pole Position Trophy.

He bumped back championship rival Lewis Hamilton to second on the grid as Mercedes repelled a late challenge from Williams in Q3.

Against expectations the rain stayed away for qualifying. Less unexpected was the continued absence of four cars this weekend, which meant that as in America only four cars would be eliminated in each stage of qualifying.

Both Lotus drivers fell in Q1, with Pastor Maldonado last of the runners. Maldonado spoiled one lap by out-braking himself at turn one as he overtook Fernando Alonso’s Ferrari. An irate Alonso voiced his displeasure on the radio.

Two drivers who had completed little running on Friday also fell in Q1. Sergio Perez did no laps at all yesterday and failed to make the cut, as did Jean-Eric Vergne who managed just five laps on Friday.

Rosberg picked up where he left off in practice, heading Q1 as he had all three practice sessions, with Hamilton a tenth of a second slower.

As one of two drivers facing a seven-place grid penalty, Daniil Kvyat decided to save tyres rather than attempt setting a time in Q2. That left 13 cars contesting a place in the final top ten shoot-out.

Daniel Ricciardo also opted to save tyre life, making just a single run which proved sufficient to gain himself a place in the final ten. It briefly pushed Sebastian Vettel down to tenth, but he moved up to sixth with his last run, leaving Alonso in danger.

Adrian Sutil, who went off at Juncao on his first run, was the last driver across the line to set a time. But a low battery left him half a second off team mate Esteban Gutierrez, meaning both Sauber drivers were eliminated.

While Hamilton was unable to improve on his time from Q1, Rosberg improved by four-hundredths of a second to head the times once again. Late runs from the Williams pair allowed them to split the two Mercedes drivers.

With all eyes on the battle between Rosberg and Hamilton for pole position, the Williams pair suddenly joined the fray in Q3.

Hamilton was the first to set a time, crossing the line with a 1’10.195. Rosberg took the top time off him but didn’t have as much in hand as he had earlier in the session, pipping Hamilton by less than three-hundredths of a second.

The FW36s were giving away little to the W05s, however. Bottas got within two-tenths of a second of them. Then Massa, harnessing the car’s excellent straight-line speed, set the fastest final sector time to claim third place, less than a tenth of a second off Rosberg’s mark.

The quartet began their final runs in the same order. Hamilton locked a wheel at Bico de Pato, oversteered wide, but still crossed the line with enough time in hand to beat Rosberg’s time. That handed Rosberg an opportunity he wasn’t going to miss – once more there was just three-hundredths of a second in it as he claimed pole position.

The Williams challenge faded at the last: Massa aborted his final attempt despite posting an improvement in the first sector and Bottas had to settle for fourth. Mercedes-powered cars occupied the top five positions, with Button taking fifth.

With the new track surface at Interlagos promoting ever-quicker laps, Rosberg’s pole position time of 1’10.023 is the fastest ever seen at the Brazilian track, albeit two-tenths shy of the all-time track record.