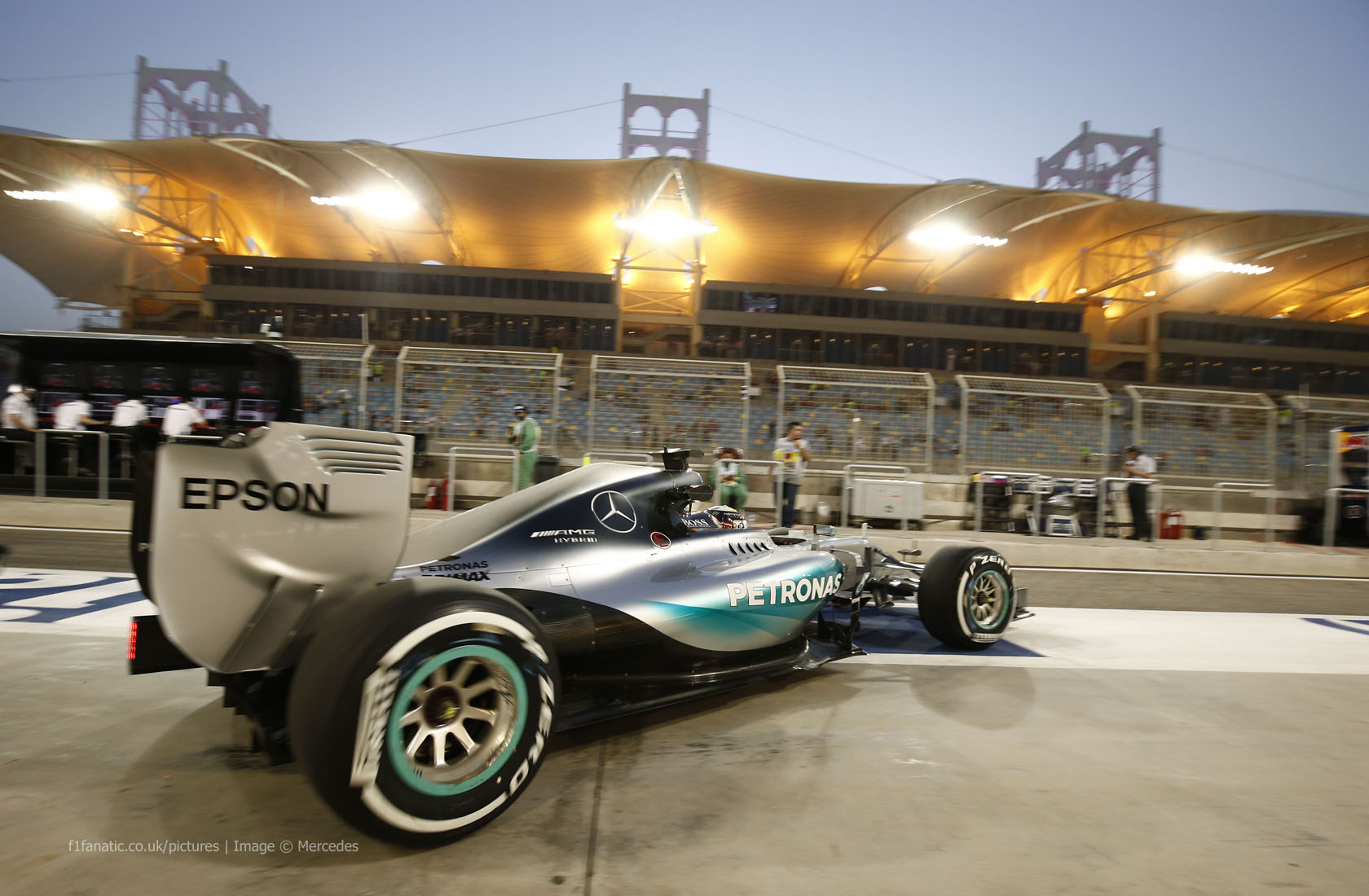 Lewis Hamilton took his fourth consecutive pole position of the 2015 season in Bahrain, but it will be Sebastian Vettel’s Ferrari who starts alongside the world champion on the front row.

An exciting qualifying session saw Vettel split the two Mercedes to take second on the grid for tomorrow’s race, after Lewis Hamilton took pole position with the final lap of the session.

Nico Rosberg will line up third with Kimi Raikkonen’s Ferrari behind him and the Williams of Valtteri Bottas and Felipe Massa in fifth and sixth.

Nico Rosberg set the early pace at the front on the Medium tyres, but all teams opted to switch to Soft tyres to avoid being caught out by an improving track.

After a difficult start to the weekend for Jenson Button, the McLaren driver’s luck turned even worse when his McLaren ground to a halt yet again without him setting a time, dooming him to start from the very back tomorrow.

Lewis Hamilton used the Soft tyres to break the 1’34 barrier for the first time this weekend to go quickest with a 1’33.928 while Valtteri Bottas went second quickest in the Williams.

As the chequered flag flew, Pastor Maldonado improved his time to get himself into Q2, but Max Verstappen jumped up to 14th position to bump the Lotus driver out at the death.

After spinning in final practice, Daniil Kvyat’s day went from bad to worse when a mistake on his final lap meant he was unable to improve by enough and he was eliminated in a disappointing P17.

Fernando Alonso brought some badly needed cheer to McLaren as a great final lap put him P9 and into the second qualifying session for the first time in 2015.

Hamilton wasted no time in picking up the pace immediately where he left off in Q1 by lowering a 1’32.669 on his first attempt in Q2, going over a second quicker than his team mate.

With drivers in the top ten forced to start on their Q2 tyres, it was difficult to read into lap times. Raikkonen went P2, but was almost a second slower than Hamilton as Massa split the two Ferraris in third.

A tight finish to the second session saw Sergio Perez jump up to P10 before Carlos Sainz Jr won the final slot in Q3 with a great lap to push the Force India driver out.

Both Saubers were unable to make it through, with Fernando Alonso eliminated in P14 – McLaren’s best quaifying of the season. Max Verstappen will line up in 15th after being half a second slower than his team mate.

The Ferraris were the first cars out to set a time in the crucial final session with Vettel quicker than Raikkonen, but Daniel Ricciardo used fresh tyres to eclipse both Ferraris on his first effort.

Lewis Hamilton went quickest of all after the first flying laps were completed in the final session, but with only Daniel Ricciardo having used a new tyre on the first run, there was plenty of scope for improvement.

Sebastian Vettel took provisional pole with his best lap of the weekend – a 1’33.227 – which put Raikkonen behind his team mate.

Nico Rosberg was then unable to beat Vettel’s time either, putting him second, before Lewis Hamilton snatched his fourth consecutive pole of the season at the chequered flag, four tenths faster than Vettel.

116 comments on “Hamilton on pole as Vettel splits the Mercedes”