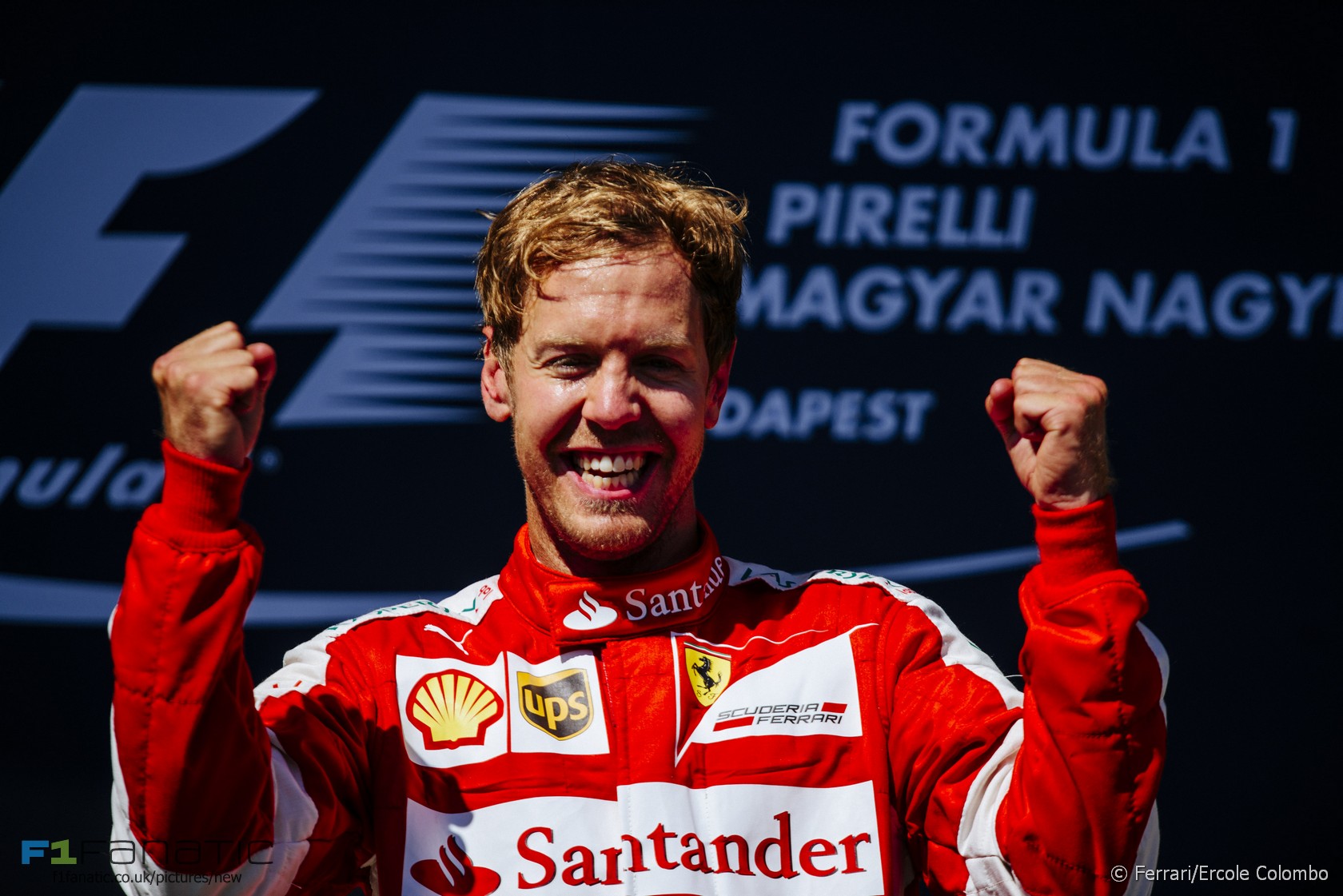 Sebastian Vettel was voted Driver of the Weekend for the third time this year following his Hungarian Grand Prix victory.

The Ferrari driver’s second win of 2015 was every bit as surprising as his first, and earned him more than 50% of the Driver of the Weekend vote.

Vettel didn’t have the best of starts to his weekend. He was out-paced in both Friday practice sessions by Kimi Raikkonen, despite his team mate experiencing various setbacks.

As the weekend progressed however, so did Vettel’s pace. He narrowly beat Daniel Ricciardo to the ‘best of the rest’ grid slot behind the un-catchable Mercedes.

Come Sunday however, it appeared as though no-one could touch him. A fast start – made to look all the more impressive by the slow starting Mercedes – saw Vettel into the lead by turn one, with his team mate in tow. From there they eased away from Nico Rosberg, and Vettel in turn was pulling clear of Raikkonen when the Safety Car appeared.

As Raikkonen dropped out of contention with an MGU-K fault, Vettel lost his rear-gunner but kept his head, and just when all around appeared to lose theirs. At one stage it looked as though his rivals were lining up behind him ready to try a move, but as they wiped one another out one-by-one Vettel drove calmly to the flag for his second win of the season, forty-first of his career, and probably the most emotional yet.

Flawless start, great pace compared to Raikkonen and Rosberg on softs. He was unlucky with the Safety Car, when all his efforts were nullified and he was put under pressure. He had the slowest car out of top three and managed to keep Rosberg out of his DRS zone. Just brilliant.
@Kairat

Despite a few niggles during the practice, he got third on the grid and made the best use of a good start by overhauling the Mercedes and going on to win the race. It could have gone astray with the Safety Car situation but the team and driver keep their collective heads.
@Loup-garou

I had a small tinge of doubt about his abilities but not to the point of continually questioning him. None here any more. As others pointed out, his opening lap and breaking of the DRS of Rosberg was brilliant.
@Jabosha The last race before the summer break offered several drivers who’ve had difficult season the chance to capitalise. Among them were Ricciardo and Fernando Alonso, who claimed third and fifth places respectively, and also figured highly among your top picks.

For me, the driver of the weekend is Daniel Ricciardo. He out-qualified his team mate, and would have definitely finished ahead of his team mate, and possibly fight for the win if it wasn’t for the two stupid Mercedes, Rosberg and Hamilton screwing up his race.
@Ultimateuzair

Alonso was quietly brilliant this weekend. Showed strong pace in practices where team mate Button was languishing in McLaren’s usual position. Alonso was very unlucky not to progress further in Q2, given his promising pace in the improving McLaren-Honda. Steadily making progress in the race, and stayed out of trouble when everyone went crash-happy.

His fifth place was indeed a massive morale boost for McLaren!
@Robertthespy Did Daniil Kvyat deserve more credit for his best-ever finish of second? His engineer wasn’t that impressed with his drive and nor, it seems, were most of you:

I’m not at all unsurprised by the lack of votes for Kvyat. He was ordinary all weekend, slower than his team mate, and picked up a time penalty in the race for an off-track overtake. He really lucked into second.

Though if I can say one positive thing, at least he was there to pick up the pieces, but that doesn’t constitute a Driver of the Weekend vote.
@Mathers

It was a strange weekend for Lewis Hamilton, who dominated proceedings on Friday and Saturday only to suffer a disastrous race. Nonetheless he still attracted 3% of the vote from those who pointed out his Hungarian Grand Prix wasn’t a complete write-off:

Hamilton drove the worse race we could have predicted, and he still extended his points lead over Rosberg.
RP (@Slotopen)