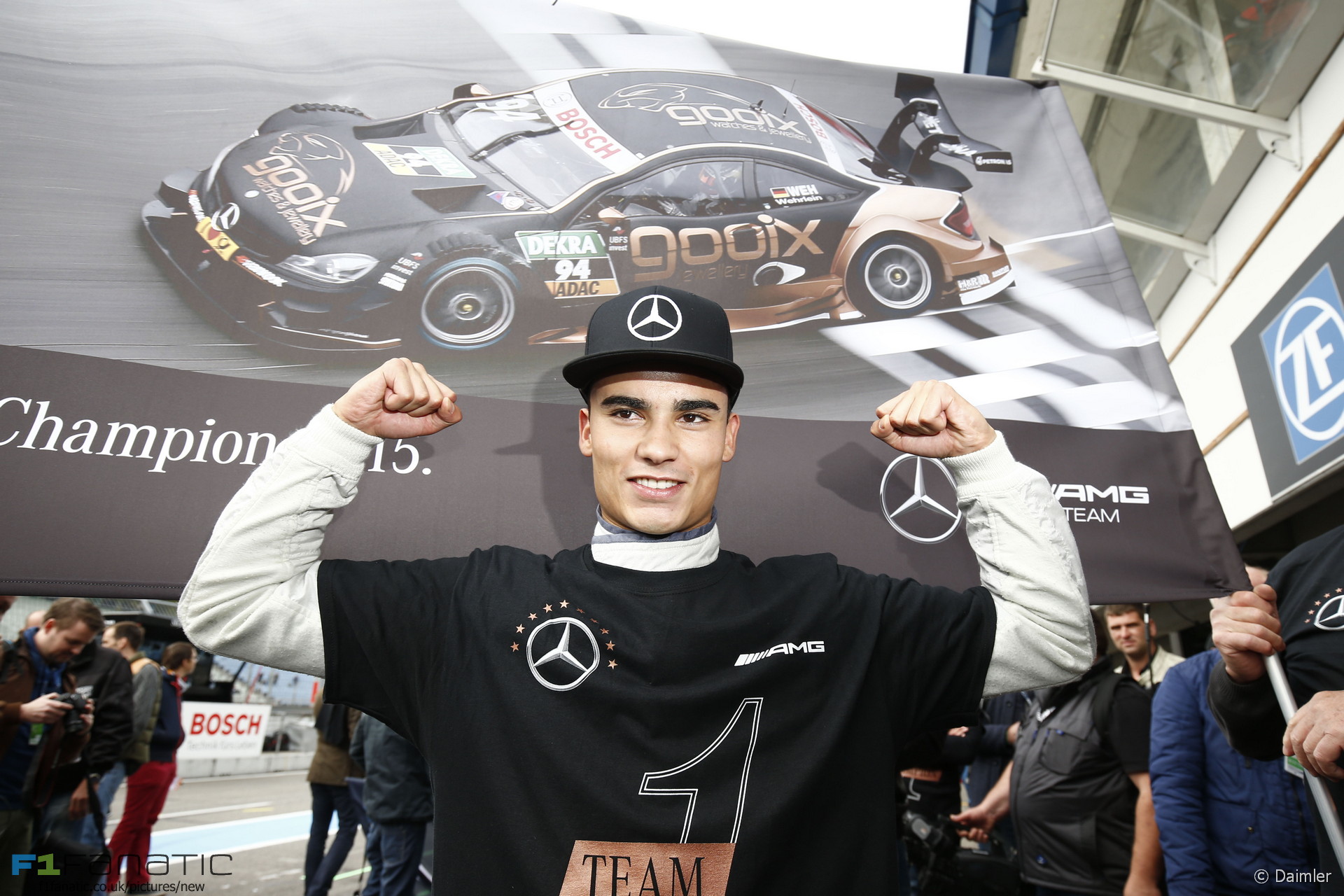 Eighth place in the first of the weekend’s two races was enough for Mercedes F1 test driver Pascal Wehrlein to clinch the title, becoming the youngest ever DTM champion. Wehrlein’s closest rivals – Audi duo Mattias Ekstrom and Edoardo Mortara – finished off the podium which was headed by their team mates Timo Schneider and Jamie Green followed by BMW’s pole sitter Maxime Martin.

The newly-crowned champion endured a miserable final race in the season finale, limping home 20th. A fourth win of the year for Green – who had been winless since claiming victory in three of the opening four events – moved him up to second in the final standings ahead of Ekstrom and Mortara, who joined him on the podium

Oliver Rowland looked set to achieve his goal of adding a double race victory at Jerez to the championship he secured at Le Mans. He won Saturday’s rain-affected race after passing Tom Dillmann when the pole sitter suffered a puncture, which Dillmann blamed on contact from his rival. Pole position on Sunday put him on course for his first double win of the season, but a mistake on the slippery track at the end of lap one opened the door for Nyck de Vries to end the season with his maiden triumph.

Rowland nonetheless now holds the records for most Formula Renault 3.5 wins of all time – ten – and most in a season – eight, beating the record set by Carlos Sainz Jnr last year. The championship will no longer be administered by Renault next year, with Jaime Alguersuari’s RPM Racing taking control of the series he originally founded in 1999.

Felix Rosenqvist already had the title in the bag but that didn’t stop him taking yet another race win, as he won the last race of the season at the Hockenheimring in a race that summed up perfectly the events of the season, blighted by no fewer than four Safety Car periods.

Antonio Giovinazzi secured second place in the standings with a win in the second race. Charles Leclerc, who shone in the series’ first visit to Hockenheim five months ago, completed a 16-race run without a podium finish yet held on to the top rookie honours earned by his Van Amersfoort Racing predecessor Max Verstappen 12 months ago.

Ferrari junior Lance Stroll ended his turbulent year on a high with his first win of the season in the opening race of the weekend.

Points leader Hiroaki Ishiura could only manage fifth place in the penultimate round of the year at Sugo, one place behind closest title rival Kazuki Nakajima.

Nakajima led from Lotterer after another rapid start but was passed by his team mate early on. Joao Paulo de Oliveira’s podium hopes were dashed after he stalled in the pits, leaving Honda-powered duo Naoki Yamamoto and Tomoki Nojiri to take second and third while Toyota extended their monopoly on victories to a full calendar year.

Ishiura goes into the double-header finale six points ahead of Nakajima with 18 up for grabs.

Next round: Suzuka, Japan (8th November)

Andreas Bakkerud took his first win of the season in Italy while reining Champion Petter Solberg closed on his second consecutive title after rival Timmy Hansen suffered issues and was unable to start the semi finals.

Bakkerud took a fairly comfortable victory ahead of Johan Kristoffersson while Solberg completed the podium.

Joey Logano repeated his victory of a week ago after clashing with Matt Kenseth, leaving his rival at risk of not making it through to the next round of the chase for the cup.

Next round: Talladega Superspeedway (25th October)

Back-to-back wins from pole in two very wet races on Saturday made Jack Aitken the lead driver in a three-way title showdown on Sunday. However a technical problem forced him to start the final race from the pits – a disappointment which was tempered by the fact he’d only qualified 25th after a spin. But his title rivals failed to capitalise: from third on the grid Louis Deletraz slumped to sixth, when Kevin Jorg squandered his chance the moment he pulled away from the grid on wet tyres on a dry track.

Deletraz had led the championship from the first race of the year, but Aitken’s fifth win of the season on Saturday meant that despite his Sunday drama he ended the season as champion.

New Zealand’s Nick Cassidy and Japan’s Kenta Yamashita had thus far been in fine form throughout the year, both with 5 wins from 15 races, and it was those two fighting it out for the title. Pole position for both races went to Cassidy, with Nissan’s GT Academy star Lucas Ordonez second. Yamashita took the third spot for race one and fourth for race two.

Cassidy held a four-point lead after qualifying, and took victory in race one ahead of Ordonez. Yamashita lost the final podium spot to Honda protege Nirei Fukuzumi by only 58 thousandths of a second. With Cassidy also taking fastest lap, he went into the final race holding an 11-point lead with exactly that many available.

A win and fastest lap for Yamashita could have given him the title had Cassidy failed to score: the Japanese driver would have won on countback of third places. But the calculators weren’t needed: Cassidy dominated the final, finishing 20 seconds ahead of Ordonez with Yamashita third. His final margin of victory in the championship was 16 points, and gave him his first title since the Toyota Racing Series two years ago.

Which of these season ending encounters did you watch and enjoy? Let us know in the comments below.

Next weekend the F1 drivers’ championship could be decided at the Circuit of the Americas. We also have the penultimate round of the WRC from Spain, V8 Supercars and NASCAR.

And while most series are winding down Formula E is about to get started again: the 2015-16 season sparks into life in China on Saturday.