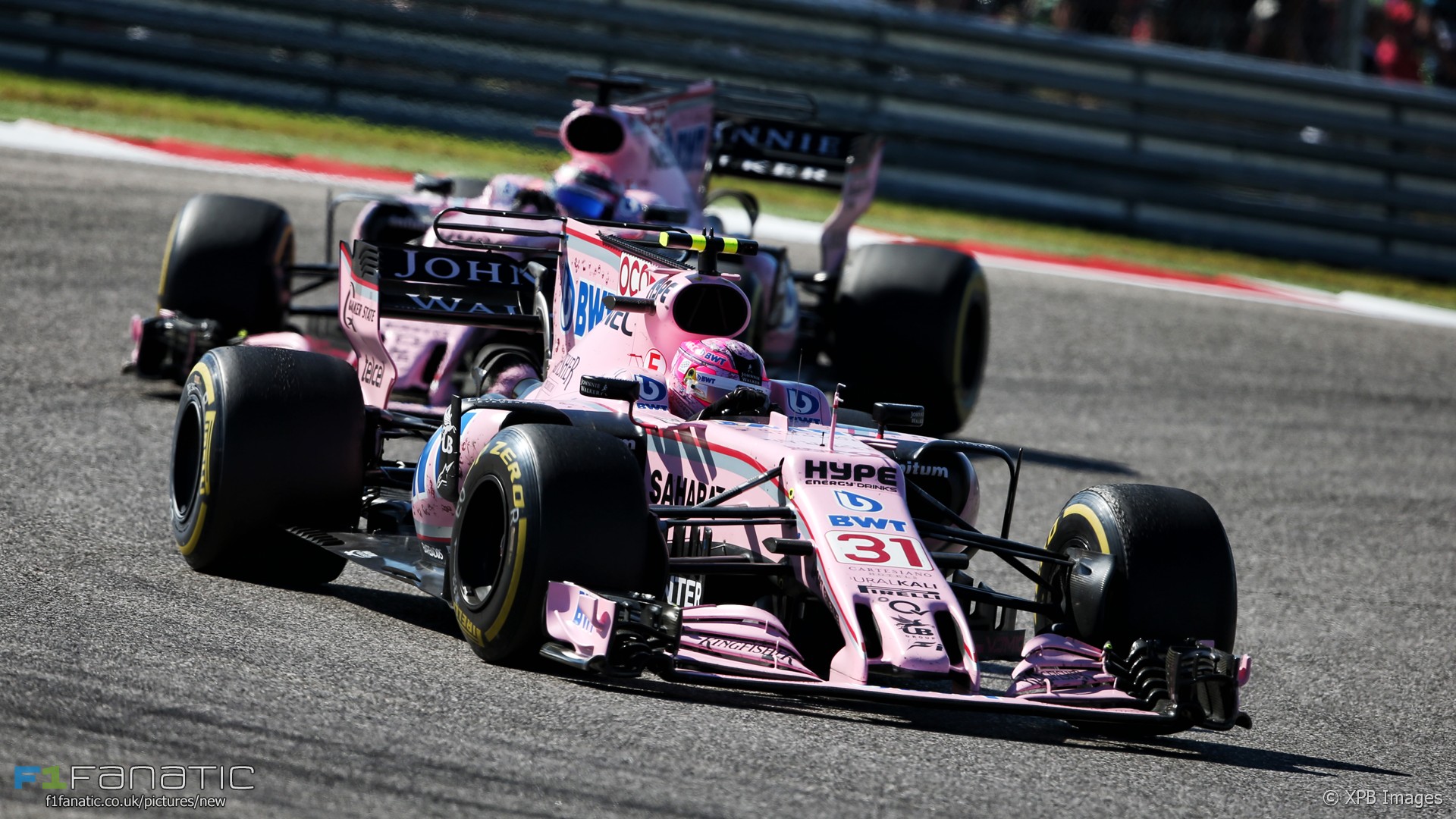 For the second race in a row Sergio Perez tried to get Force India to impose team orders on Esteban Ocon, without success.

Here are the team radio highlights from the United States Grand Prix.

There was no repeat of Ferrari’s pre-race problems from Japan.

Hartley: “Can you give me an update on the exact wind direction?”
“Tail wind into turn one.”

A frustrating weekend for Nico Hulkenberg came to an early end.

Wehrlein: “Someone crashed completely into me.”
“Understood. Feedback on damage”
Wehrlein: “Yeah the car is not driving well.”

“How are the tyres?”
Ricciardo: “Fronts are pretty [censored by FOM].”

Vettel: “I’ve got blistering on the front-left.”

“Think about your speed through turn six to make sure you’re quick enough for seven, eight, nine.”
Verstappen: “Yeah, I don’t want to damage the tyres.”

Raikkonen: “Just drive into me but I guess that’s [censored by FOM] OK.”

Verstappen: “What happened to Daniel?”
“He has stopped.”
Hamilton: “Tyres are good. I can extend this stint.”

Alonso: “It’d be nice to know what strategy we’re doing.”
“We are plan B. Perez +2.4. Ocon and Stoffel in front. This is our chance on Ocon.”

Lewis Hamilton was surprised to find Vettel close behind him after his pit stop.

Hamilton: “A little bit close, guys. Why’d it get so close?”

Alonso: “I think I have an engine issue.”
“Back off please.”
Alonso: “I can’t believe it. Another six, eight points.”
“Yes mate I know. Back off and we will retire the car.”

Stroll: “I mean it’s unbelievable how bad the traction is.”

Perez got stuck behind Ocon but not for long – Carlos Sainz Jnr soon split the pair of them.

Perez: “We need Esteban to pick up the pace. I’m much faster.”
“Understood.”
Perez: “Sainz is coming. I have a lot more pace than this. Can you tell Esteban to let me by?”
“Checo we need more management. Esteban is doing the management.”

Vettel switched to a two-stop strategy but it was to no avail.

Vettel: “Plan B?”
“Understood, we are thinking.”
Vettel: “I’m not saying do it right away.”

“Grosjean: “Front-left, there is no more rubber.”
“OK, understood.”

Magnussen: “I don’t think I’m going to be able to do the last six laps on these tyres, guys.”

To Raikkonen: “Seb is now the car behind.”

There was a terse exchange at Haas in the final laps as Grosjean lobbied the team to retire his car.

Hamilton’s win means he is virtually guaranteed the 2017 championship. Raikkonen was passed by Max Verstappen on the final lap but was given his place on the podium back after a penalty.

“Get in there Lewis!”
Hamilton: “Great job guys. Ah that was so much fun today.”
“Mercedes world champions!”

“Come on, Danny! P10! One point in the bag. Well done.”
Kvyat: “Thanks mate.”
“You made it, well done, awesome drive on this stint, not easy at all.”
Kvyat: “Grazie Marco, been a while. Good race so thank you.”
“Welcome back mate, well done, I’m proud of you.”

“Very good job Brendon. The pace was pretty good at the end. Shame about Stroll at the beginning. Verty good job today, strong race.”
Hartley: “Yeah thanks a lot guys, awesome. Yeah I mean we lost a lot of time behind Stroll, but mate I’m smiling. Amazing feeling to complete my debut so thanks a lot guys.”
“Yeah you’ve done well, very strong race again. And the pace was not bad at all.”
Hartley: “Yeah I lost so much behind Stroll in that middle section buddy. But anyway, cheers.”

19 comments on ““Can you tell Esteban to let me by?”: US GP team radio highlights”