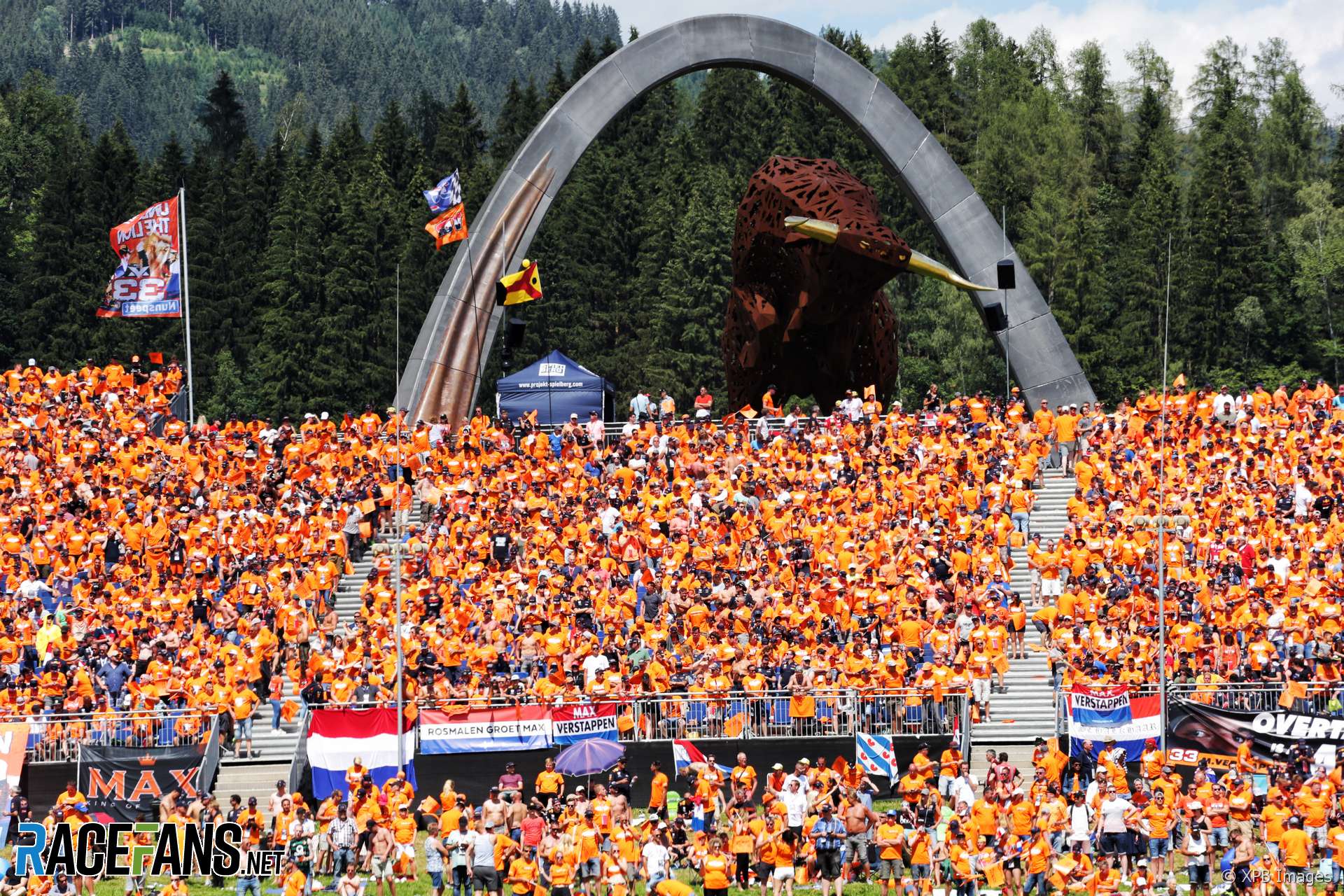 Visiting the Red Bull Ring was a breath of fresh, Alpine, air for @DieterRencken after the horrendous traffic problems at Paul Ricard one week earlier.

Arrive at circuit, breakfast – standard Continental – then take a call from the media centre: I’ve been granted access to the pit building roof to have an unimpeded view of Red Bull’s ‘Holzhaus’ Energy Station. So large is this wooden, ‘rustic’ building that it’s impossible to photograph in its entirety from the paddock.

The hospitality unit serves Red Bull’s KTM and Honda teams at Moto GP, and provides a marketing base for the company’s Rookie Cup championship – a separate ex-F1 unit provides hospitality for the junior series. I’d been told that the Holzhaus ruffled a few feathers in the Moto GP paddock, and once I’m on the rooftop I see why.

It’s simply enormous, dwarfing the (already spacious) Mercedes unit beside it. Yet it’s only Red Bull’s third-largest unit, after the special Monaco floating motorhome and F1 units which serve both Red Bull Racing and Toro Rosso. From the roof it’s also obvious the company spares no expense on facilities: Red Bull’s track-side F1 technical centre is by far the largest unit in the paddock.

Head for lunch at Pirelli – I’d booked a table for four. If that sounds restaurant style, it’s because the kitchen and service would do a superior restaurant proud. Today is no exception. Apart from an extensive buffet, the kitchen offers a full menu. An Australian colleague and I order swordfish with Mediterranean vegetables; the other two in the party fancy steak and ravioli respectively.

Tasty desserts round off a superb dining experience. Thanks guys!

The day drags through to pit lane opening at 2:30pm. Sure, there are frissons of excitement when news breaks that Fernando Alonso will start from the pit lane and Brendon Hartley incurs a tactical engine change. But, frankly, the sooner Liberty return to traditional start times, the better for F1 personnel. When experiments don’t work, scrap them.

On the grid I chat with Derek Warwick, ex-F1 driver and BRDC president and driver steward for this race, and I’m reminded of a discussion I had with Stuart Pringle, CEO of Silverstone, on Saturday, namely my suggestion that the club, owner of the circuit should seek a one-year extension to present contract, which expires (prematurely) in 2019.

Post-2020 F1 is currently in limbo, plus Lewis Hamilton is talking of a two-year deal with Mercedes ahead of retiring – at end-2020. Both factors are crucial to the success of the race, so extending the current deal makes sense: Liberty and the BRDC have clearer ideas of F1’s landscape and Lewis’s future, which affects crowds. It also provides a longer negotiating window just as Liberty battles to maintain 20-race calendars.

After the (downcast) post-race session with Toto Wolff, I mention Christian Horner’s suggestion that the Red Bull-developed Aston Martin Valkyrie AMR Pro could beat Porsche’s new Nürburgring Norschleife lap record – salient in view of his comments on Friday that Mercedes would be unlikely to fund such a project. He perks up and divulges that Mercedes is looking at doing a lap simulation.

What if data shows an adapted Mercedes F1 car could smash the record? There’s a thought…

Leave circuit, and reflect on the weekend as I drive out. It’s been an absolute pleasure staying within 10 minutes of the track and commuting on unclogged roads controlled by friendly wardens. Unlike Paul Ricard a week ago, everything just worked in Spielberg.

If attendance figures are to be believed – I’ve been in the business too long to glibly swallow numbers put out by promoters who need to justify events – Spielberg hosted 185,000 walk-ins over four days, whereas the French circuit pulled 165,000 punters. Both circuits are situated in rural areas, with the closest city, in this case Graz, being around 45 miles away.

From Paul Ricard it took me two-and-a-half hours to drive 45 miles to Marseilles. From the Red Bull Ring this weekend I took the same time to cover the 140-mile journey to Vienna airport. And in France I left it and hour-and-a-half longer after the race to leave the track.

I expect my experience will have been shared by many fans who attended these races. So is there any wonder the French circuit (reportedly) received scathing reviews from Liberty, whereas Spielberg will (deservedly) receive high scores?