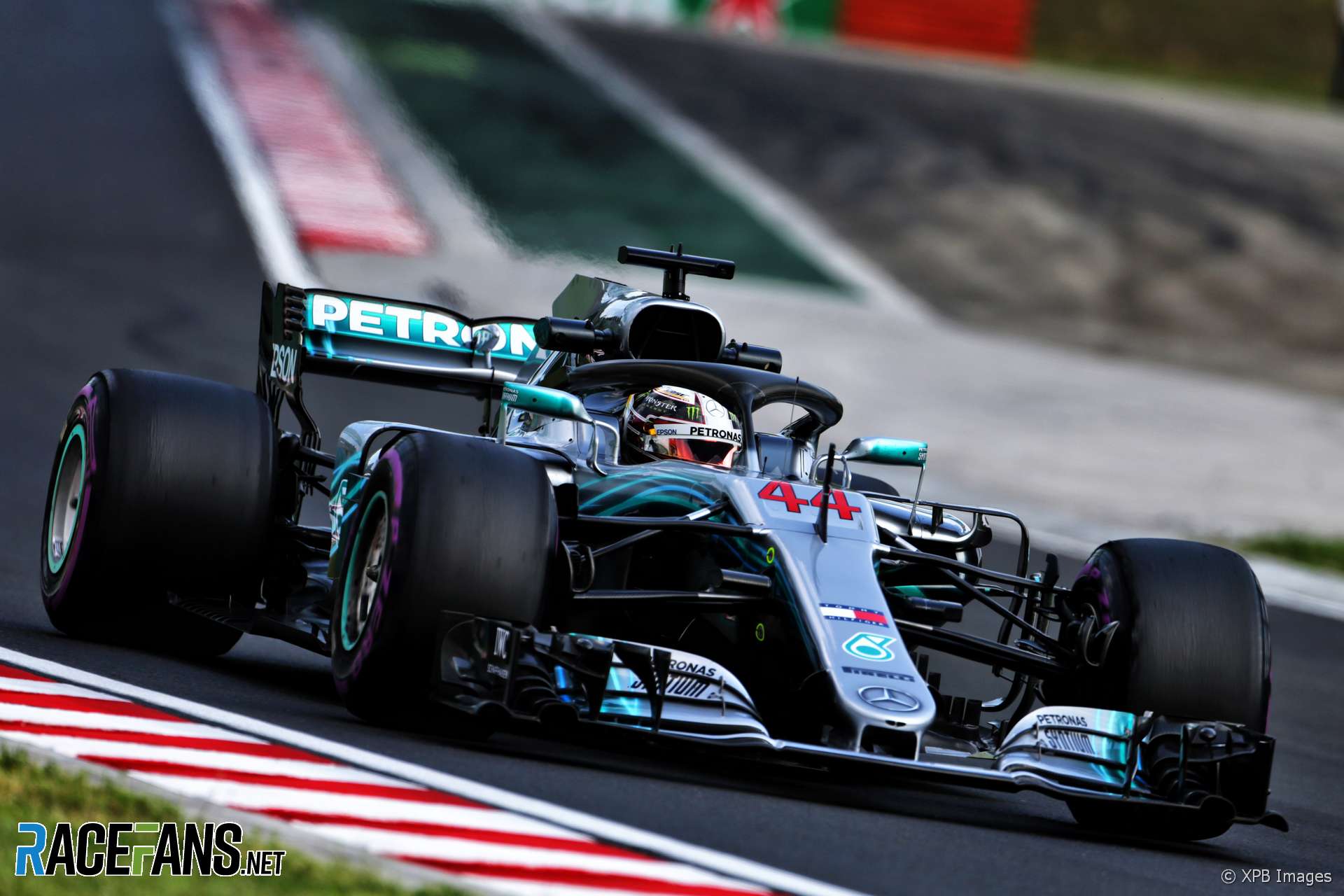 Lewis Hamilton took victory in the Hungarian Grand Prix ahead of Sebastian Vettel and Kimi Raikkonen after Valtteri Bottas and Vettel clashed late in the race.

Hamilton and Mercedes won a strategic battle against Ferrari to take his fifth win of 2018 and his sixth at the Hungaroring ahead of Vettel and Kimi Raikkonen.

Bottas clashed with Vettel as the pair battled over second place, causing damage to his front wing before colliding a second time with Daniel Ricciardo a handful of laps later.

Ricciardo eventually took fourth ahead of the heavily damaged Bottas.

As the lights went out, Hamilton led away from team mate Bottas ahead of Sebastian Vettel, who passed Ferrari team mate Kimi Raikkonen.

There was contact between Daniel Riccardo and Marcus Ericsson, while Charles Leclerc became the first retirement, pulling off into the pitlane at the end of the first lap with a mechanical issue.

Despite a good start seeing him move up to fifth, Max Verstappen’s race ended frustratingly early when he suffered a loss of power on lap seven.

The Virtual Safety Car was deployed while the stricken Red Bull was recovered, but racing soon resumed.

Kimi Raikkonen was the first of the front runners to pit, with Mercedes reacting by bringing Bottas in to cover.

With both Hamilton and Vettel staying out, Vettel began to gain on the race leader as Hamilton’s tyres began to fade. Mercedes pitted Hamilton on lap 26, giving the lead of the race to Vettel.

Ferrari opted to keep Vettel out on a very long first stint, eventually pitting on lap 40 for ultra soft tyres, but a slow stop saw him resume in third behind the two Mercedes drivers.

Stoffel Vandoorne pulled off circuit with a gearbox failure on lap 51 while in ninth place, prompting the second VSC period of the race.

Raikkonen had now pitted for the second time for ultra soft tyres and with the laps winding down the Ferraris began to reel in Bottas in second, who now had over 40 laps on his soft tyres.

Vettel passed Bottas with a handful of laps remaining into turn one, but Bottas tried to retake the position into turn two by holding the inside and tagged the rear of the Ferrari.

Bottas suffered front wing damage, but Vettel appeared to be unharmed by the collision and recovered to take second place.

Bottas dropped to fourth and was vulnerable to Ricciardo behind. Ricciardo tried to pass around the outside of Bottas at turn one, but Bottas appeared to understeer with a lack of front grip, hitting into the side of the Red Bull. The incident in under investigation by the stewards.

Hamilton took the chequered flag for Mercedes to extend his championship lead ahead of Vettel and Raikkonen. Ricciardo eventually passed Bottas to take fourth.

Pierre Gasly finished in a solid sixth place for Toro Rosso, ahead of Kevin Magnussen and Fernando Alonso’s McLaren. Carlos Sainz and Romain Grosjean rounded out the points.