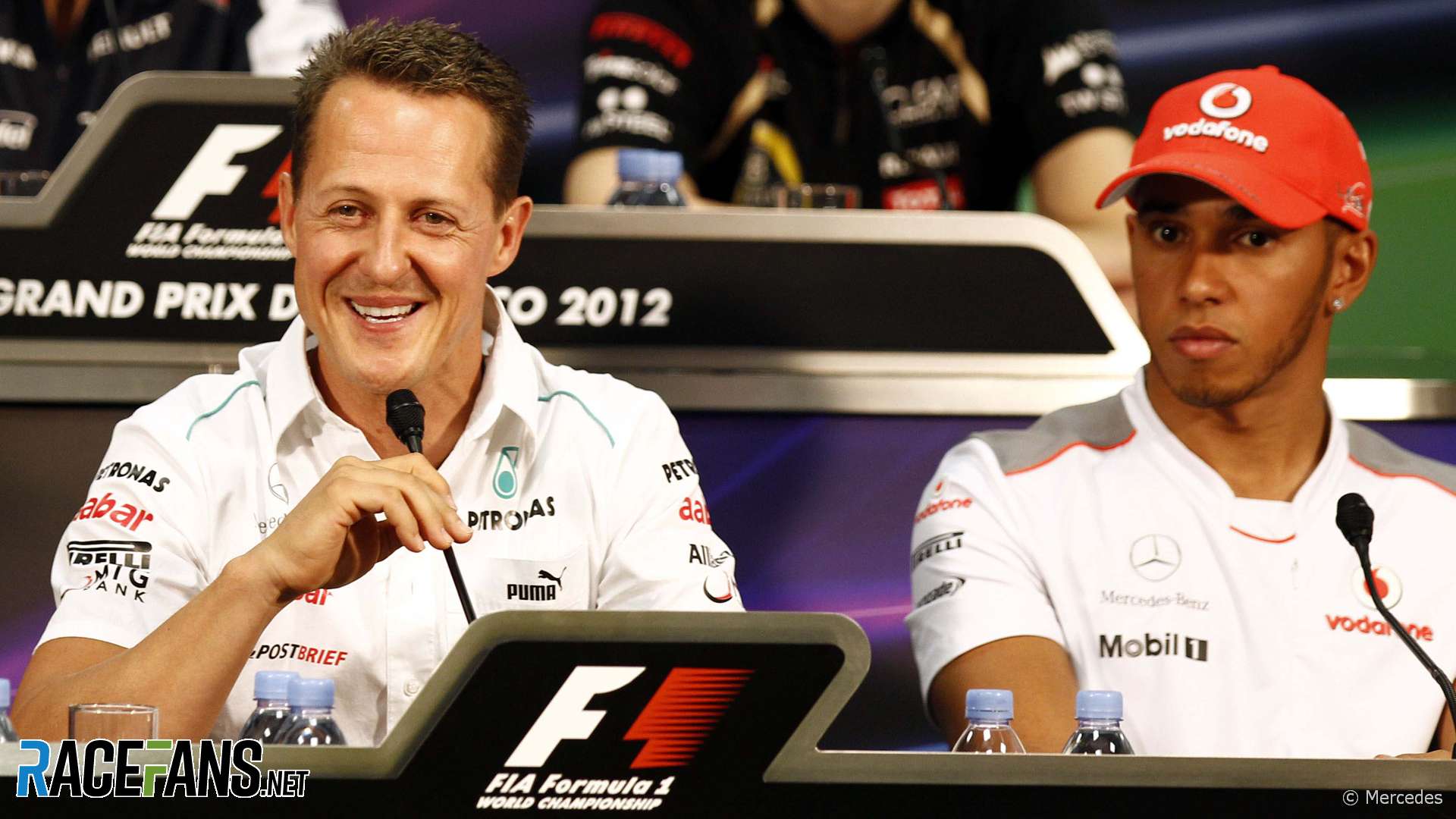 In the round-up: Lewis Hamilton says it’s not impossible he could reach Michael Schumacher’s record of seven world championship titles.

Asked whether, when Schumacher his seventh title, Hamilton thought it would never be equalled, he said:

Honestly I don’t remember him getting the seventh title. I’ve not got a great memory so I don’t remember what I thought when he won that championship. But I think that was probably everyone’s thought in the business, is it’s unlikely anyone’s going to get anywhere near.

And nothing’s promised. It’s not guaranteed every year we’re going to be able to compete the way we are and have an opportunity to win nine grands prix a year as we have the last couple. I’m not taking anything for granted.

Of course I’m going to keep pushing, keep trying to win. And if the time comes that I’m close then so it shall be but we’ll see. It’s a long way until then.

My sincere thoughts go out to @SophiaFloersch and her family after her horrible crash in Macau. Stay strong Sophia. Fight the fight

Genuinely think that if Ticktum doesn’t get an opportunity to do the young driver tests in F1, there’s something not right in the system. I understand that a Friday FP1 licence maybe a different story but surely a double Macau winner is more than Qualified to test in F1…

@LewisHamilton Errrr Whoops…….. I think I got this one wrong.
Congratulations on proving me wrong. 🙄 pic.twitter.com/ffwN1u9tIN

"Mike Conway, Kamui Kobayashi and Jose-Maria Lopez took the chequered flag in the number seven Toyota TS 050 Hybrid to register back-to-back victories after their Fuji success last month. They beat the number eight Toyota driven by Fernando Alonso, Kazuki Nakajima and Sebastien Buemi by just 1.14s to close to within five points of their stablemates in the title chase."

"Photographer Minami Hiroyuki suffered a concussion, while another photographer, Chan Weng Wang, has a lacerated liver. Race marshal Chan Cha has cuts and a broken bone in his face."

"Regardless of when it happens, Robbie will be back in our team in some capacity or another because, in such a short time, he's built quite a strong bond and friendship with people in the team."

"I always looked on 1990 as my first season of F1 racing after that,

"An RAC tribunal (sitting as British motor sport's governing body) slapped a 12-month suspension on Morgan. Despite having given an eloquent defence that doubtless swayed a tribunal that found Hunt innocent, James did agree in private that Morgan's punishment did not fit the crime."

"The tycoon has also grown a goatee and bought a luxury party pad in Ibiza as he tells pals he wants to live until he's 120."

Force India has a plan to get up to ‘fighting weight’, but what does it say about modern F1 that teams are becoming so big?

It’s actually sad (not surprising though) that a team needs 500-plus staff to compete for a mere podium in F1. And that excludes all the staff at suppliers.

There must be a way that teams sized 250-300 can create sufficient diversity ingenuity and competitiveness to make the sport exciting. (standardise more parts I guess if a budget cap doesn’t work).
@ColdflyF1

Happy birthday to Joao and Matteo!

27 comments on “Hamilton: Surpassing Schumacher is ‘not impossible, but nothing’s given’”