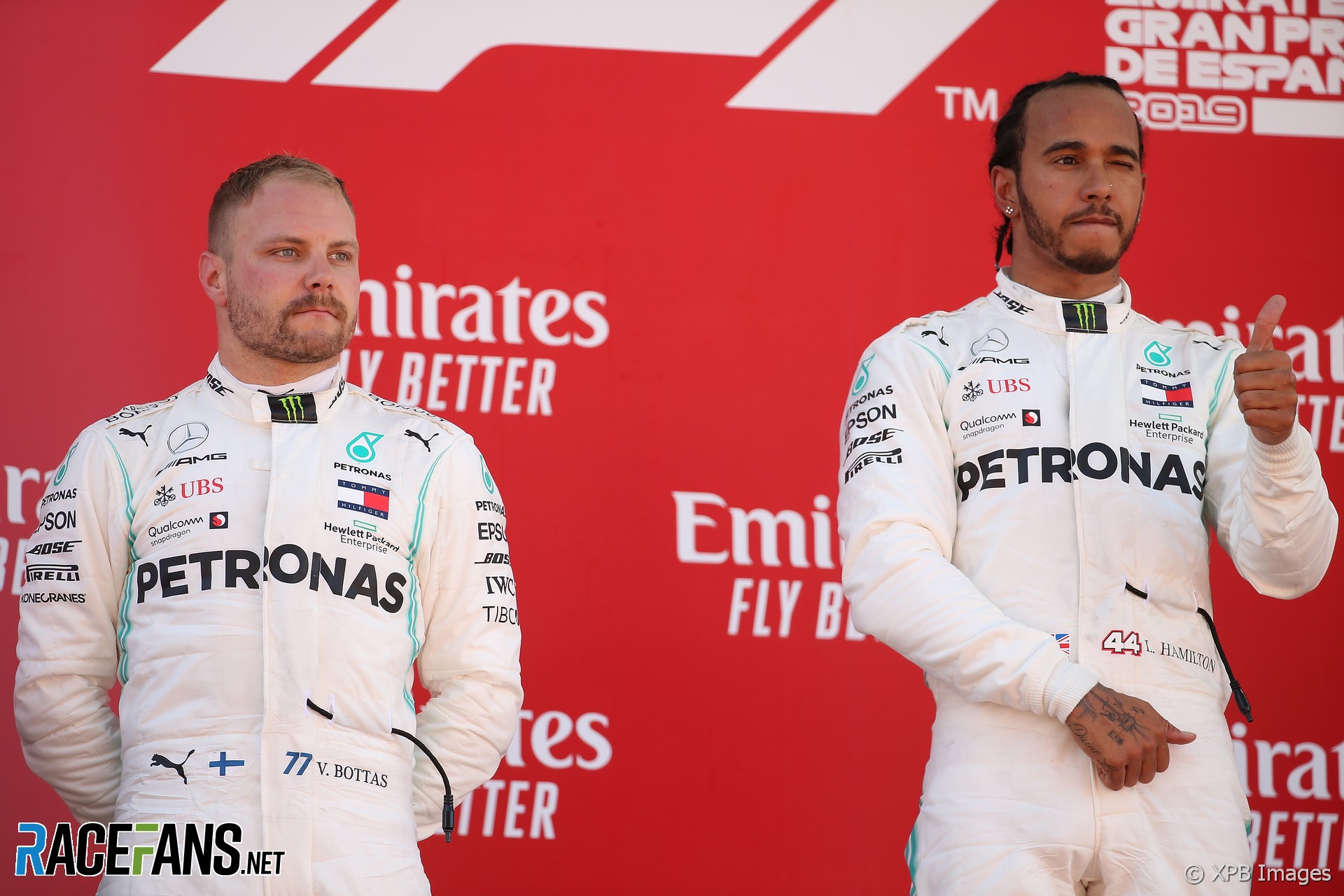 After Lewis Hamilton scored his third victory of the season in the Spanish Grand Prix he was asked whether the start of the race, when he took the lead from second on the grid, had been decisive.

“I don’t even know what to say to that,” answered a bemused Hamilton. “I mean, you watched the race, right?”

He had a point. Hamilton wasn’t been a match for Valtteri Bottas for much of the weekend prior to Sunday. But when the start handed him an opportunity to get ahead, he seized it, and the near-impossibility of overtaking around the Circuit de Catalunya meant from that point on he was unlikely to be headed.

Hamilton wins it at turn one

In China Bottas blamed wheel-slip over the start/finish line for the reason he lost the initiative to Hamilton when the lights went out. This time an unexpected oscillation in the clutch delayed his getaway enough for Hamilton to claim the inside line and take the lead.

Before taking up his place on pole position Bottas had the merest inkling that all was not quite right with his clutch. “Thinking back, one practice start gave some hints of that kind of behaviour,” he said afterwards.

“But there was also some wheelspin at the same time. I thought it was just down to wheelspin and tyres vibrating because nothing the level I experienced today, nothing alerting. I’ve never had this kind of feeling before with this car at the race start.”

The Mercedes pair sprinted for the first corner side-by-side with Sebastian Vettel’s Ferrari gaining fast behind them. He drew to the outside of Bottas, who was now pincered between two cars, and braked desperately late.

“I wanted to brake latest which I think I did,” he said, “but obviously Valtteri was also quite late so I couldn’t really get in and I couldn’t see him.”

“I knew he was there, I saw he was braking also quite late. If I just turned in which, I think I could have managed and he had nowhere to go, I [would] go the other way. It didn’t work.”

Hamilton clung to the inside line and claimed the corner. “In the end obviously I did Lewis a favour because I distracted Valtteri,” Vettel reflected.

The Ferrari driver briefly took to the run-off at turn one but rejoined, though in doing so he held up his team mate Charles Leclerc. Max Verstappen was poised to take advantage and did so perfectly, rounding the pair of them for third place.

The race was only three corners done and already Ferrari had lost touch with Mercedes and were having to find a way past a Red Bull. Worse, Vettel had flat-spotted a tyre at the first corner, which was about to give them a race strategy headache.

Vettel’s flat spot was shaking his car so badly he was “struggling to see stuff” and beginning to drop back from Verstappen. The team urged him to raise his pace, but Leclerc was looming in his mirrors and feigning to the inside of turn one, obviously able to lap quicker. On lap 11 Ferrari finally bowed to the inevitable and told Vettel to let his team mate through.

“Copy,” he replied. “I’m hanging on as good as I can with these vibrations. They’re a pain in the arse. He can go by now on the main straight, tell him that. And now look for me for pitting as soon as you can. Even in traffic, I don’t care. Better than these tyres.”

Ferrari decided against pitting Vettel into traffic, even as lap after lap he quizzed them on how soon he could come into the pits. By lap 18 he almost had enough of a gap to come out ahead of the Toro Rossos, which would leave only the Ferrari-powered Haas pair ahead of him.

“One more lap if you can,” came the message to Vettel. “No,” he answered. “OK, box then,” the pit wall relented.

Vettel, nearing the end of the lap, equivocated. “How many cars we are clearing if I keep going one lap?” “One more car,” he was told. “Alright then, staying out,” he finally decided as he passed through the chicane approaching the pit lane entrance.

The next time around he pitted and probably wished he hadn’t. The left-rear wheel but cross-threaded, and he lost around two seconds, emerging behind the Toro Rossos. Fortunately Daniil Kvyat pitted and Alexander Albon was easily dispensed with, and over the following laps Vettel was able to lap slightly quicker than the leaders on his new medium tyres. Ferrari had saved an extra set of these, and a two-stop strategy for Vettel now looked likely.

The team kept Leclerc on his original single-stop strategy, however, and put him on the hard compound tyres when he came in on lap 25. Leclerc also lost time due to a wheel nut problem, and as Vettel had gained on him in the intervening period the pair now met on track again, this time with Leclerc ahead.

They ran together, separated by about a second, for 10 laps. Eventually Vettel asked: “Are we on different strategies?” Told that they were he asked “what are we doing then?”, the implication being he should be allowed through. “How fast can you go?” he was asked. A pause, then: “Faster than I’m currently going.”

This was apparently sufficient. Now Leclerc was told to let Vettel though, something he’s already had plenty of practice doing this year. But unlike in China it was clear Vettel was quicker. And, had the race run its course without interruption, Vettel second stop would probably have dropped him back behind his team mate for good.

Lando Norris had a frustrating start to the race from 10th on the grid. He got away well from the line, held his position, but slithered wide in turn three and lost half-a-dozen places.

By lap 44 he was running behind the two Racing Points. Lance Stroll had slipped back from Sergio Perez and no longer had the benefit of DRS, which helped Norris get a run on the main straight.

Stroll covered the inside at turn one and the pair swung in side-by-side. But as they turned left Stroll attempted to take the racing line and found most of the McLaren was still there. The pair tangled, skidded into the gravel trap and ended their races.

That brought out the Safety Car. It was a disaster for Leclerc, whose gamble on one-stopping had been ruined. He pitted for a new set of tyres, surrendering third to Verstappen and Vettel.

Bottas had fallen seven seconds behind Hamilton and the Safety Car brought him back into play. But he pitted for soft tyres on the lap before it came out, which meant his rubber was slightly less fresh when the race restarted. He therefore had little hope of getting the jump on Hamilton or beating him to the bonus point for fastest lap.

Behind them the restart was a lively affair. Leclerc didn’t react well and had to fight off Gasly, who in turn came under threat from the Haas of Kevin Magnussen. He had just dispensed with his team mate at turn one, the pair making brief contact as they dived into the braking zone.

Romain Grosjean dodged through the escape road and lived to fight another day. A few laps later, aided by DRS, he was back within striking distance, and again Magnussen helped his team mate find the escape road.

Haas were getting worried. “We need to hold station for now mate,” he was told. “We just need to calm down, if you do it, it just has to be clean.”

However Grosjean’s next problem wasn’t Magnussen, but Carlos Sainz Jnr. The McLaren was within striking distance of Grosjean and made a bid to claim the inside line at turn one on the next lap.

Again Grosjean banged wheels with a rival and made his third trip across the escape road. By now he had perfected the line, and rejoined in front of the McLaren. But he wasn’t able to shake Sainz over the rest of the lap, and as they came back onto the straight the McLaren opened its DRS and shot past.

By now Grosjean was struggling with his rear tyres and Kvyat was next to take advantage, again easily flying past in the DRS zone. Now the Haas was down to 10th place, but Grosjean managed to stem the bleeding, and kept Albon at bay for the final point.

Behind Albon a disgruntled Daniel Ricciardo questioned the wisdom of Renault’s decision to put him on hard tyres after he had done the hard work of find a way past eventual eighth-place finisher Sainz earlier on. He also pointed out the team could have strengthened its hand at the restart by not leaving him stuck behind his team mate, who was on older rubber.

Nico Hulkenberg presumably would not have seen it that way, though he couldn’t keep Ricciardo behind when the race got going again, and finished 13th following his pit lane start. Kimi Raikkonen went off on lap one after gaining a place from Norris, and his streak of points scores for Alfa Romeo therefore came to an end.

He finished ahead of Sergio Perez as Racing Point came down from their Baku high at a track that never seems to suit them. Behind Antonio Giovinazzi were the two Williams drivers. Once again George Russell led his team mate home: he overtook Robert Kubica when the latter was briefly distracted making an engine settings change.

Mercedes are dominant once more

The Catalunya circuit’s 29th and possibly final edition of the Spanish Grand Prix was undoubtedly processional – the running order of the top six at the end of lap one was the same 65 laps later. The race wasn’t without its moments of intrigue and occasional drama. But it further signalled the championship fight ahead is going to be a Mercedes benefit.

Barring an incredible turnaround by Ferrari, or an unexpected leap forward for Red Bull, either Hamilton or Bottas will be the 2019 world champion.

Starting the season with five consecutive one-twos is an unprecedented achievement. Outgoing Daimler chairman Dieter Zetsche, who backed the company’s return to F1 as a full constructor at the beginning of the decade, was on hand to witness it.

But the team’s rivals must be hoping his success Ola Kaellenius is of the opinion there is only so much F1 success a car manufacturer needs.