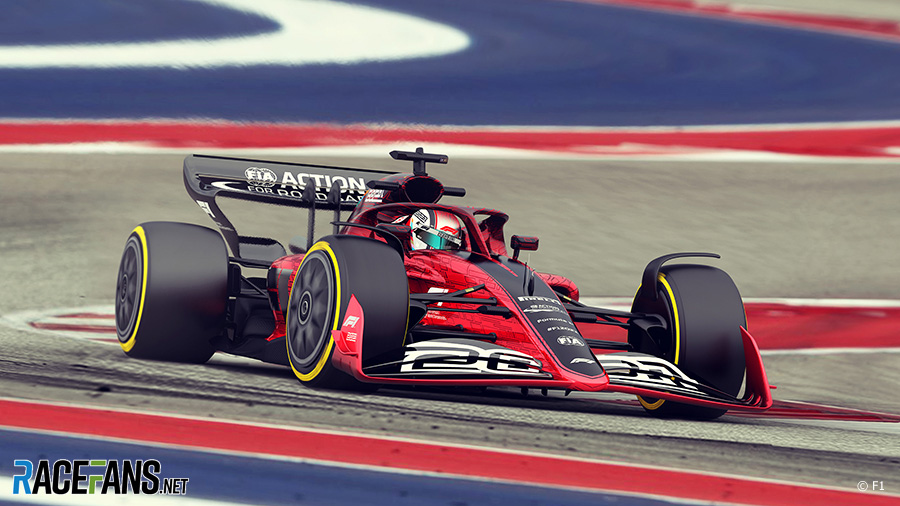 Over a month has passed since Formula 1 revealed its radical plans to overhaul the rules in 2021 and create a new generation of cars which are cheaper to create and race better on the track.

A new technical regulations package for 2021 has been approved. But now F1 teams have had a few weeks to study the new rule book more closely, not all of them are convinced it’s going to have the desired effect.

Racing Point technical director Andrew Green first arrived in Formula 1 when the team entered as Jordan in 1991. He has seen several major changes to the technical rules in that time. He thinks the 2021 package has “fundamental issues that could do with some addressing”.

F1 and the FIA are seeking to improve the quality of racing through a major shift in how F1 cars generate downforce. The 2021 cars feature much smaller and simpler surface wings, and use underbody tunnels to create a ‘ground effect’ which generates downforce. This should make them less sensitive than current cars to following other cars closely.

“The concept is do-able,” says Green. “But I think the wording needs some refinement, shall we say, to make it into a set of regulations that reflect the intention.”

With so much changing in 2021, the rule makers have taken it as an opportunity to clean up the regulations, consolidating all the areas concerning aerodynamics into one article. This will offer other potential improvements, as the FIA’s head of single-seater matters Nikolas Tombazis explained when the new rules were announced.

“The aerodynamic regulations are going to be much more CAD-based, computer-based, than currently. So we’ve introduced an axis system – a coordinate X, Y, Z system – and a lot of the legality of the cars will take place on the CAD. We will simultaneously be taking scans of the cars and comparing the scans to the CAD shapes in order to ensure the cars are legal in all aspects of the regulations.

“Also all the aerodynamics of the car is covered by article three. Previously there was a few dispersed areas of aerodynamics in other articles, like brake ducts and the brake system or whatever. Now everything has been brought into article three which is the cornerstone of all aerodynamic regulations.”

[icon2019autocoursempu]But it’s here that Green raises several concerns. These include whether the rules are going work as intended, how closely the rules reflect the wind tunnel model presented at the launch of the regulations, and how tightly the rules restrict what teams can design.

“What was presented as a 2021 model by F1 and what’s written in the regulations are two different things,” said Green. The main differences occur in “the whole of article three – the aerodynamic section.”

The rules remove many aerodynamic structures and add some – such as the distinctive strakes above the front wheels – in order to reduce the amount of ‘dirty air’ the cars generate. This should allow other cars to follow more closely. However Green believes there are some unintended consequences from these changes.

Based on his team’s research into the regulations, Green believes the 2021 car is “currently creating its own dirty air”, a problem he believes other teams have also discovered in their preliminary work on the 2021 cars.

“It’s more about what’s happening at the front of the car and where all the dirty air is going,” he explained. “Which is right underneath the tunnels, right into the tunnels.”

He intends to “have a word with F1 about that” at the next meeting on the technical regulations today.

During the lengthy process of debating the new rules, teams frequently warned they would leave them with too little freedom to design their own cars. Having seen the finished rules, Green says it’s clear teams will have “much less freedom” in 2021.

“I think there’s some areas where there is extremely restrictive, restrictive to a point where it’s almost impossible to design anything.”

The FIA insists this level of restriction is necessary to ensure the 2021 rules achieve the goal of improving the racing.

“Some areas of the car, not a huge number, are going to be prescribed,” said Tombazis, “because there are some areas where there’s such sensitivity to control the wheel wakes that we feel that if we didn’t actually restrict the shapes, we would end up with potentially teams finding ways to overcome the key objectives.”

But Green believes not relaxing the rules in some of these areas will seriously compromise the cars’ handling.

“There are areas that could do with being freed up around the front wing,” he said. “Around the front of the car I think it’s incredibly restrictive to the point where it’s really going to hurt the handling of the car.

“It’s going to be a real nasty piece of work to drive which I think is something that if they allowed a little bit more freedom would allow us to sort that out but still retain the intent of the ground effect car [and] low following wake.”

For some, the idea of F1 drivers having to fight for control of their cars sounds like something which might make for a better spectacle. But Green isn’t convinced.

“Aerodynamically going be quite unstable. I don’t think that’s a nice thing to get to drive. You want cars that are a bit more predictable so the drivers can attack, be sure what they’ve got underneath them.

“If they know what’s going to happen they can drive the car at the limit knowing that it’s stable at the limit. And from what I’ve seen at the moment none of those statements are true for a 2021 car.”

Green’s analysis is not shared by all the teams. McLaren team principal Andreas Seidl cast doubt on the suggestion that the 2021 cars will have a new ‘dirty air’ problem.

“We don’t have these findings,” he said, adding they “completely disagree” with the claim the new rules need further development in order to fully realise the sport’s goals. “We are happy with what is on the table. Of course, there is still some fine-tuning required, as always. But we don’t see an issue.”

The publication of the 2021 regulations has fired the starting gun on F1’s next big development race. All the teams will be eyeing the potential to capitalise on the biggest change to the rules for a generation.

That is the lens through which we should view their comments on the merit of the rules changes, whether in favour or against. One way or another, there is always an advantage to be found.