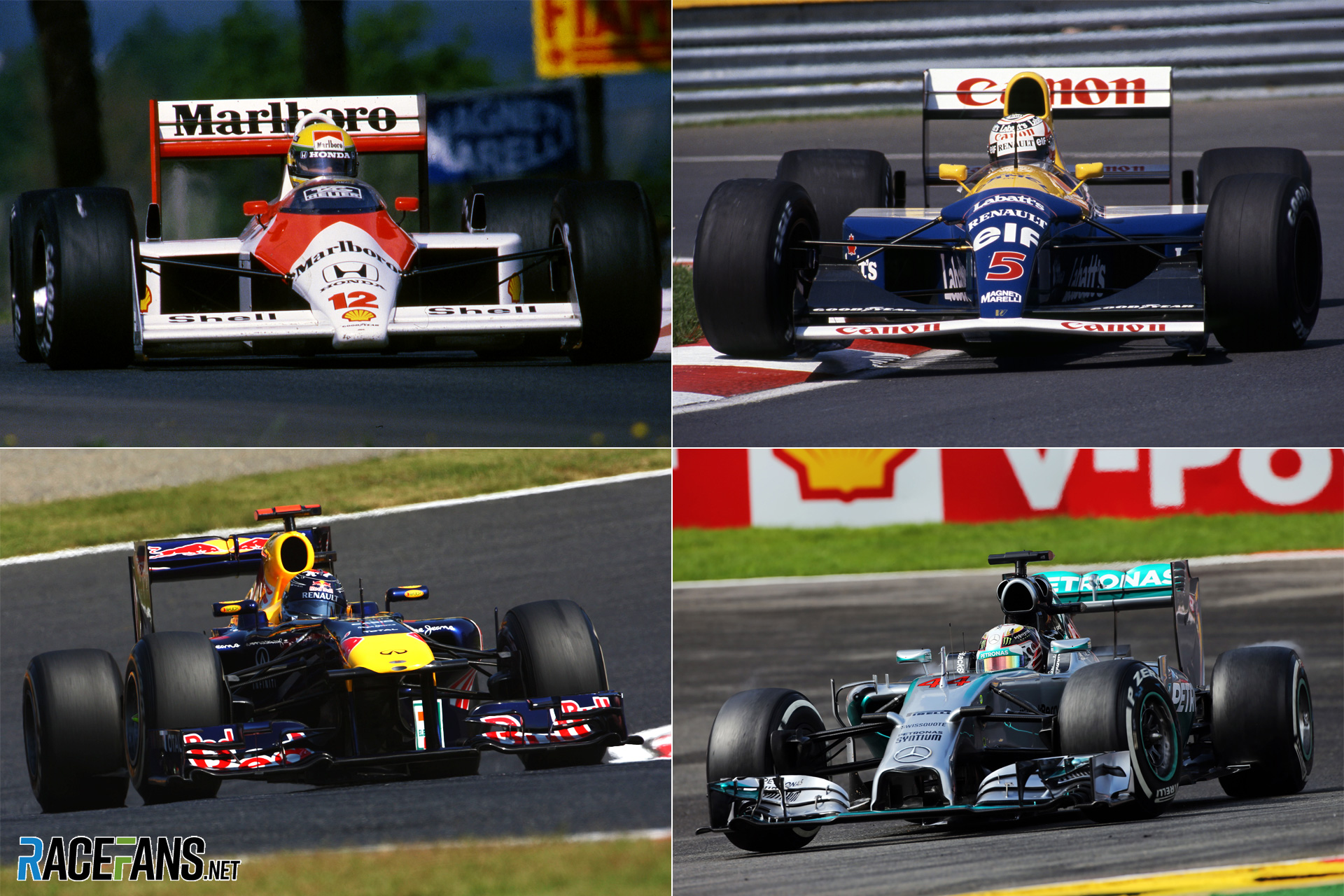 With their 10th pole position from as many races in Sochi last week, Mercedes came a step closer to achieving a record of dominance which has eluded them several times before.

Once again, they are on course to become the first team to sweep every single pole position in a world championship season.

Incredibly, Mercedes and five of their current rivals have come within one race of achieving the feat in the past. In every season from 2014 to 2016 Mercedes took all bar one of the pole positions available.

Alfa Romeo and Ferrari nearly did it back in the early years of the world championship, in 1950 and 1952. They missed out only at the Indianapolis 500 in those two seasons. This was not run to F1 rules, and Alfa Romeo did not attend in 1950, though Ferrari sent a single car for Alberto Ascari two years later.

For a long time the prospects of anyone heading the field at every single race looked remote, particularly as the calendar grew longer. It wasn’t until the late eighties that anyone came that close again.

By the end of the turbo era Honda had achieved an unrivalled mastery of the formula. McLaren, who did not take a single pole in 1987 with their ageing TAG-Porsche engines, switched to Honda for 1988 claimed the top spot at all bar one of the races the following year. This wasn’t simply due to the quality of its engine or even the superiority of its driver pairing – Ayrton Senna and Alain Prost – but also the exquisite craft of the low-slung MP4/4 chassis.

Lotus, equipped with the same engines plus three-times champion Nelson Piquet, were regularly a second or more off pole position, and only qualified on the second row twice. McLaren’s run of poles was interrupted on home ground at Silverstone by Ferrari.

Despite a wholesale change of formula for the following year – 1.5-litre turbocharged units swapped for 3.5-litre normally aspirated engines – Honda remained the benchmark, and McLaren again took pole at every race bar one. In a sign of things to come, this time the interlopers were Williams-Renault.

By 1992 they had become were the dominant force in Formula 1 and not just thanks to their superb V10 engine. Patrick Head, Adrian Newey and Paddy Lowe melded aerodynamics, electronics and car dynamics to incredible effect with their active suspension FW14B.

This car was almost comically quicker than anything else on the track. It took the genius of Senna to displace it from pole position at the Canadian Grand Prix, edging Riccardo Patrese to second and bumping Nigel Mansell off the front row for the only time all year.

Williams iterated the design for 1993 and remained the class of the field. So much so that as they approached the final grand prix of the season, they had started every race that year from pole position. But around the short Adelaide circuit they were soundly beaten by – who else? – Senna, running on fumes in his McLaren, having accidentally toggled his radio on, and therefore unable to hear his team urging him to pit because he was almost out of fuel…

The field closed up in the years that followed. Following the reintroduction of refuelling in 1994, by the early noughties drivers had to qualify with their starting fuel loads, spoiling the purity of qualifying as an index of one-lap speed.

Proper qualifying finally returned in 2010, and the following year another Renault-powered Newey creation – the Red Bull RB11 – came within one race of sweeping every pole position. Sebastian Vettel racked up 15 poles over the course of the year – a record which still stands – but at round 16 in South Korea he was knocked off the top spot by Lewis Hamilton’s McLaren.

Two years later Hamilton was in a Mercedes and therefore perfectly placed to reap the benefits of their standard-setting V6 hybrid turbo power unit. They crushed the competition almost totally in 2014, 2015 and 2016. Yet each year a different rival denied them a clean sweep of pole positions.

In 2014 it was Williams, courtesy of Felipe Massa at the Red Bull Ring after both Hamilton and Nico Rosberg made mistakes. Nonetheless, Mercedes power took pole at all 19 rounds that year.

In 2015 it was Ferrari, in Singapore, where Mercedes were a baffling 1.4 seconds off the pace and confined to the third row. This rare defeat meant they fell one short of equalling the record of 24 consecutive poles Williams set in 1993, which they still hold.

Finally in 2016 an inspired lap by Daniel Ricciardo in Monaco put his Red Bull on pole position by a tenth of a second from Nico Rosberg’s Mercedes. For the third year in a row, a clean sweep had eluded them.

If Mercedes are to finally achieve a monopoly of pole positions this year, they won’t need to start from the front as many times as they did in any of those three seasons, as this year’s championship has been cut to 17 rounds.

So far the closest any of their rivals has come to beating them was at Mugello, where Max Verstappen’s Red Bull was 0.365 seconds slower than the pole-winning W11. Could he, or another of their rivals, deny Mercedes the record, as has happened so many times before?

The 10 times a team almost set pole in every race