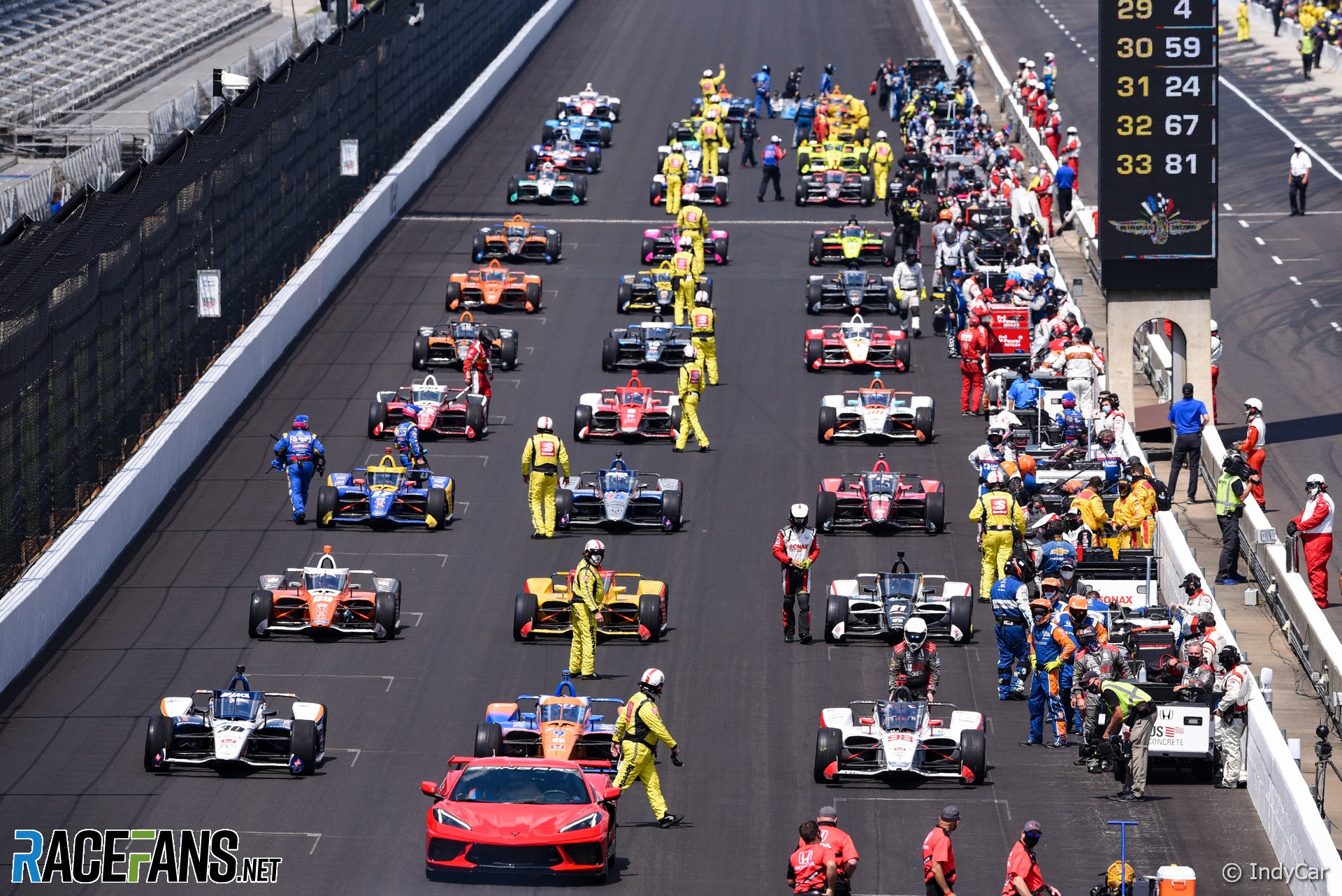 What qualities will define this Sunday’s 105th running of the Indianapolis 500? We know that this race has the potential to be the fastest running of the Indy 500 in history. Over two days of time trials, the 33 cars that qualified averaged over 230 miles per hour over the course of their four-lap qualifying runs. If the conditions are right during the race, the 500 mile speed record of 186.563 mph – just a few tenths above 300 kilometres per hour – could also be broken.

Speed records are impressive in their own right, but every racing fan loves, more than anything, to watch a competitive race with plentiful opportunities to overtake and race wheel-to-wheel.

During last year’s Indianapolis 500, held three months later than usual in August and behind closed doors due to the pandemic, drivers found it difficult to overtake. There were just 21 lead changes during the race, less than one-third of the record 68 official lead changes.

Outside of mid-race restarts, it was difficult for cars follow each other and on overtake on-track. This coincided with the addition of the protective aeroscreen to the Dallara IR18 chassis, which has absolutely done its intended job of protecting the drivers, but the added weight and drag from the assembly had unintended side effects for the quality of racing.

That’s why, beginning with an off-season test on October 29th, IndyCar examined various aerodynamic configurations to try and improve the quality of racing for its showcase event. Small wings added to the holes in the forward section of the car’s floor, and optional barge boards at the front of the sidepods, have been added to increase downforce and offset the effect of turbulent air on the front wing.

The IR18’s Indianapolis 500 debut, in 2018, also saw a number of drivers voice concerns about not being able to follow other cars in traffic, especially exiting corners. That led to off-season tests and aero tweaks which led to a 2019 race that was received much better from the general public. Coincidentally, the 2018 Indy 500 was also one of the hottest on record, with ambient temperatures breaking the 32°C threshold.

As of publication, projected temperatures for this year’s Indy 500 should be much cooler, under the “average” Indy 500 temperature of 25°C which seems much more sensible for the race’s traditional May calendar slot. And if this year’s changes to the aero package have the intended effect, it will be much easier for cars to follow one another through corners and overtake with enough momentum and speed. Which, of course, means that the quality of the race itself will be much better than it was last year.

There is no debating whether or not the field of 33 drivers is of exceptional quality. Nine of the 33 drivers are previous winners of the 500, the most former winners to take the start of a race since 1992.

But beyond the many contenders for victory and the questions about whether or not the race will go down as an all-time classic, a contemporary dud, or somewhere in between – there is one welcome addition to the Indianapolis 500 that was sorely missing from last year’s race: The fans at the speedway.

At 40 percent capacity, Indianapolis Motor Speedway will open its gates to as many as 135,000 spectators. If every available ticket is sold, and every available seat is filled along the grandstands, this would be the biggest sporting event since the first wave of the novel coronavirus pandemic came crashing down over the entire world last spring.

It’s a sign of things returning to something that resembles the normal way of life we knew before, and we certainly hope that they, along with the 33 drivers and every member of the crews that support them, can come home safely long after the chequered flag falls, and the winning driver streaks across the famous yard of bricks to victory.

Of those nine previous Indy 500 winners, 2008 winner Scott Dixon leads the way as the odds-on favourite to win it all in 2021. Dixon has won six IndyCar championships, and his 51 career victories are the most of any active driver by a significant margin – which is why having just one Indy 500 victory feels like an unsatisfying mark on Dixon’s CV.

A second Indy win is “goal number one”, said Dixon. “I think it’s the first goal that we set for the team all year, then you focus on the championship. That’s never changed. I think the first time you step into this place, come with one of the best teams, that’s the obvious sort of goal for us to try and achieve that.”

“Last year was frustrating,” Dixon recalled of finishing second to Takuma Sato, having led a whopping 115 laps. “Again, this place owes me nothing. We got to keep knocking on that door and hopefully one day again, one day soon, that opens up.”

One day soon could very well be this Sunday. But for that to happen, Dixon will have to fend off the charge of not only the eight other previous winners, and a slew of veteran fixtures who’ve never won the Indy 500, but also have to see off the challenge of IndyCar’s current youth movement.

These are led by a quartet of drivers under the age of 25 who’ve already won a race each this season: Colton Herta, Patricio O’Ward, Rinus VeeKay, and Dixon’s Ganassi team mate Alex Palou. They will go from the first four rows of the grid, with Herta and VeeKay starting starboard of Dixon on the front row, both young men aiming to break a nearly 70-year-old record as the youngest Indy 500 winner in history (O’Ward, who starts from the fourth row, is also eligible to break the record).

On the opposite side of the spectrum of former winners, Will Power will go from the last row of the grid after escaping the indignity of being bumped from the field. “I had to hold it wide open – otherwise I wouldn’t make the show,” Power said after qualifying a woeful 32nd place with a run that saw him brush the wall on his last lap.

The 2018 winner’s struggles are endemic across the entire Penske fleet. Rookie Scott McLaughlin, who qualified 17th, was the one relative bright spot out of the camp. Reigning champion Josef Newgarden qualified 21st, and 2019 winner Simon Pagenaud is 26th.

That’s to say nothing of what Penske-supported upstart Paretta Autosport and Simona de Silvestro had to go through just to grab the 33rd and final grid position, as the only woman in the race, driving for a team primarily staffed with women working as mechanics, engineers, spotters and other crew members.

Penske’s plight is in stark contrast to Ganassi, who had all four of their drivers in the Fast Nine qualifying session – Dixon, Palou, third-year driver Marcus Ericsson, and 2013 winner Tony Kanaan, in what will likely be his final Indy 500 appearance at the age of 46.

Andretti Autosport’s fleet of cars were up and down the grid order over time trials. Along with Herta, former Indy winners Ryan Hunter-Reay and the fearless Alexander Rossi can be found on the first four rows. Former pole winner James Hinchcliffe made the race with no drama, in stark contrast to his 2018 and 2019 travails.

Andretti’s technical support has also been great for the two-car Meyer Shank Racing effort, with three-time Indy 500 winner Helio Castroneves making the third row in his continued quest to become the fourth four-time Indy 500 winner, and Jack Harvey solidly in the field, hoping for his own breakthrough at Indy. But last year’s pole winner Marco Andretti was left deep in the field this year, and a returning Stefan Wilson barely escaped the last row shootout himself in Andretti Autosport’s fifth and sixth cars, respectively.

Ageing athletes chasing elusive championships at the sunset of their careers is a compelling story of any sport and the Indy 500 is no exception. Driver/owner Ed Carpenter is a sentimental, hometown favourite from Indianapolis, trying to win the race for the 18th time in his career. He once again has a fast car, defying the struggles that engine partner Chevrolet have had in contrast to rival Honda teams.

Further back in the grid, there’s four-time national champion Sebastien Bourdais, who has amassed 37 victories over two uniquely brilliant stanzas in American open-wheel racing – but none in the Indy 500, in eight previous starts.

The aforementioned Marco Andretti is the third-generation driver who’s still been chasing the Indy win that just barely got away from him as a teenager 2006, but another legacy driver hungry for his first Indy 500 win is Graham Rahal – who’s already racked up 13 previous starts without a win at the age of 32, and is hoping to follow in the footsteps of his father (and team director), 1986 winner Bobby Rahal. One could also make the argument that the clock may be starting to tick for Newgarden to win the race for the first time, even though he is still young and very much in his competitive prime!

If there is an Indianapolis 500 upset in the works, similar to the late Dan Wheldon’s shock victory as a part-time entrant 10 years ago, it may very well come from fighting minnows Dale Coyne Racing and their duo of young drivers in fast cars that have flown under the radar throughout practice and qualifying. The returning Ed Jones upstaged Fernando Alonso in his 2017 debut with Coyne, and rookie Pietro Fittipaldi has Indy 500 success in his bloodline, as the grandson of two-time Indy winner Emerson.

Speaking of two-time Indy 500 winners, Juan Pablo Montoya’s return after a four-year hiatus adds yet another previous winner to the mix – and although his first race back was tough, and he hasn’t quite had the speed of his younger Arrow McLaren SP team mates O’Ward and Felix Rosenqvist, Montoya has never lost the competitive fire of his youth.

Oh, and by the way – Takuma Sato is the two-time and defending champion of the Indianapolis 500. The seemingly ageless Sato could win this race for a third time, all of them coming after his 40th birthday. If that happens, any debate over who the greatest Japanese racing driver of all time is, would certainly begin and end with Sato above all – and he would now have to be part of a different discussion, as part of the Indy 500’s greatest champions of the modern era.