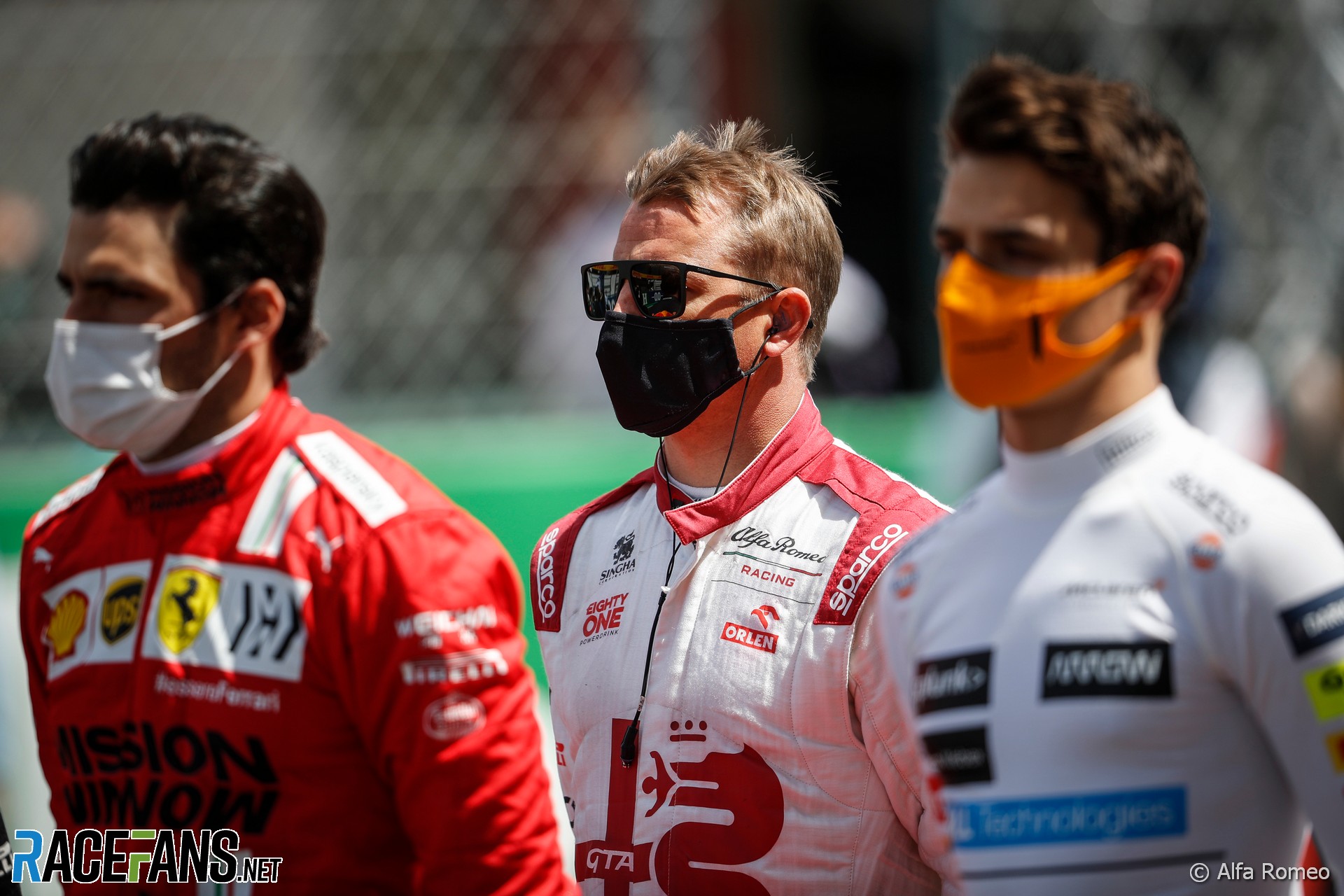 Kimi Raikkonen announced his retirement ahead of the Dutch Grand Prix but was unable to start the race following his positive test for Covid-19.

However he will return to the championship at the next round in Russia for the first of what should be the final eight races of his career.

The driver’s former team mates and rivals paid tribute to the achievements of the 2007 world champion and winner of 21 grands prix, most recently at Circuit of the Americas in 2018.

Raikkonen joined Formula 1 in 2001, not long after some of his present rivals were born. After beating Lewis Hamilton and Fernando Alonso to the world drivers’ title in 2007, he spent two further years at Ferrari before leaving F1 at the end of 2009.

Following a spell in rallying and even a brief sojourn into NASCAR, Raikkonen returned to F1 with Lotus in 2012. He won twice with the team before reuniting with Ferrari for a longer, five-year stint. he later joined Alfa Romeo and has become the most experienced driver in F1 history, with a record 341 starts to his name.

After Raikkonen announced his retirement plans, his current rivals drivers reflected on his influence on their own careers and reputation on and off track.

“I wish him all the best. I think he’s been around a long time and is an incredible talent. So seeing that first-hand as a team-mate for some years was impressive.

“Just the amount of speed he has right from the get-go and the ability to get used to different conditions, different cars. He’s definitely earned his place and had obviously a long and great career.”

Raikkonen’s championship rival and team mate at Ferrari in 2014

“We will miss him because obviously he has been [in F1] for many years and we had great battles. In the past, more because we had more competitive cars and we were fighting for championships and podiums and things like that.

“There are always 20 drivers in F1 and we go up and down on the order and we go, sometimes not in the sport anymore and it’s probably his decision. I think he [had] an amazing career, he did enjoy the time here and for sure, wishing him the best for for the future.”

McLaren junior driver while Raikkonen drove for the team

“He’s had an incredibly long career. He’s been here a long, long time. He’s got a family and he’s already said he’s got things he’s looking forward to enjoying beyond. But I just admire his will to continue racing, clearly racing in his blood.

“I remember, before I got to Formula 1, being a huge fan of Kimi’s and when I played the computer games, I’d always be in Kimi’s car, so this crazy experience of racing against him, losing a championship to him and then seeing lots of great battles, and so he will be missed.”

“I knew him since 2017 when I joined Ferrari as the third driver and to be honest straight away we had a great relationship together.

“I think Kimi is really fair inside and outside of the track, from my side. No politics, great team mate and for me he was a big help when I joined Formula 1, to be his team mate, I learnt so many things from him. Especially in the race he’s still really, really strong and also the passion that he has for the sport, after many years, he’s still really motivated now.

“So, yeah, a really great guy and for sure Formula 1 will miss him.”

“I think, like he said himself, that nothing lasts for forever and eventually always there’s time for something new and he had an impressive and long career in Formula 1. One of the longest, if not the longest.

“He’s obviously a big, big star in Finland. He’s a bit of a legend. So it’s definitely always was good fun to watch him.

“It’s been nice also racing with him because he’s one of one of the drivers that when when you race with, you’re quite comfortable, you’re not going wheel to wheel. He has always had good respect to you, to his competition, just the way I like racing.”

“When I heard the news, I was obviously quite sad because I was looking forward to driving another year on the same grid as him.

“But I think that he’s got family and he’s saying he wants probably to see something else other than Formula 1 one, which is understandable after so many years. But definitely sad.

“I remember the first time where we really were in the same room for some time was in St. Petersburg when the FIA Gala was there and we all had a very good time. So definitely we’ll miss those moments.”

“I think Kimi has had an incredible career. I remember looking up to him in the very early days, with the fights that he had with Fernando.

“I think he can be extremely proud of what he’s achieved in the sport, he’s certainly enjoyed his time on the sport his own way. I think Kimi was a very unique character, a very unique person and I just wish him the very best in his next chapter of life and all the happiness that he deserves.

“All reaction when when someone retires – in a way or you’re happy for them because they’ve made the decision, he’s obviously at peace with it and he’s at a point in his life where he’s ready to do other things. So I’m happy for him to have that next chapter.

“I think looking back on his career, when I was a fan of the sport growing up, I remember he was young and fast. That was that was the image. And was able just to jump in a car and have that raw speed and [he] also made a very successful comeback after leaving for two years. So then to win a race post-comeback was impressive.

“I know he has a family and stuff, so I’m happy for him to be more of a dad probably in the future now and spend some more time probably at home.

It is sad news. Of course, we are missing a character of Formula 1 and one fantastic driver that has left a big mark into the sport.

We don’t talk much with Kimi, he doesn’t talk much to to anybody, but clearly we will miss him and the fights I had with him were great. And he’s an amazing driver. I wish him the best for his future.

“He’s one of the guys who’s made Formula 1 what it is today, since many years ago. So I think he’ll be missed.

“He’s obviously not a big talker, so he won’t be missed as in how much he says but more for the for the opposite reason in a way. So he has a lot of character and also not much character at the same time and so many people love him because of it so he’ll be missed, I think, by many.

“Still one of the best drivers which have been in Formula 1 and he’s achieved a lot of things more than many of us drivers who are on the grid currently. So yeah, one day I would love to emulate him in a way.”

“The first time I ever spoke to Kimi, the conversation ended with him twisting my nipples, at the FIA gala in 2018. He is one of a kind, [I have] a huge amount of respect for everything he’s achieved on track and off circuit as well.

“He’s a bit of a legend and for sure he’ll be missed. There’s no one like him.”

26 comments on ““So many people love him”: Raikkonen’s rivals pay tribute to retiring champion”