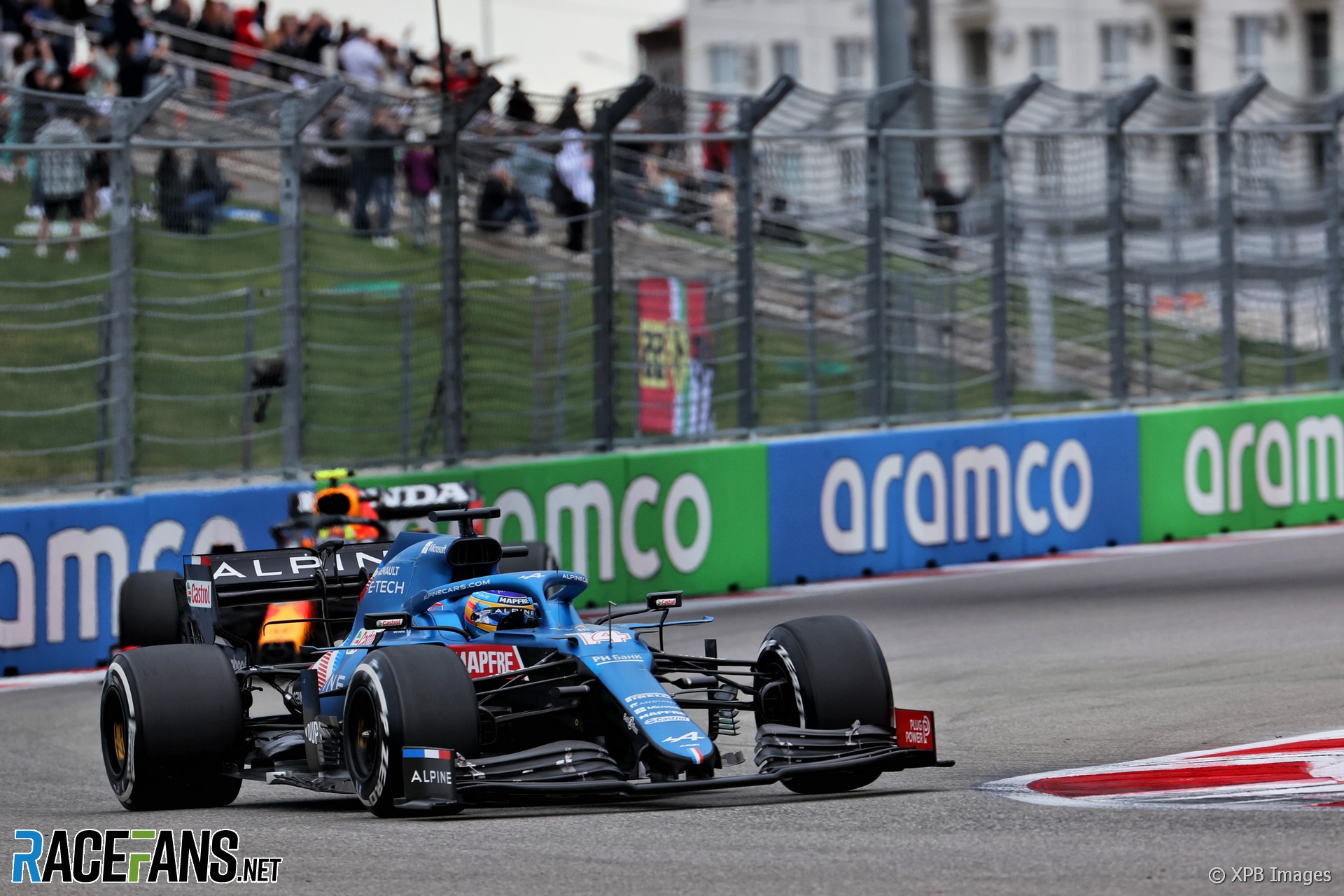 In the round-up: Fernando Alonso says his drive to sixth place in Russia, where he looked set for a podium finish at one stage, was his best performance since he returned to Formula 1.

Having scored points in all bar one of the last 10 races – missing out at Spa where he finished 11th in a race which was cut to just a single lap behind the Safety Car – Alonso wants more over the final seven races of the season.

“I think Sochi was possibly one of my best races this year,” he said. “The car was competitive during the race and the battles with the Ferraris, McLarens and Red Bulls were very exciting towards the end. In just a few laps we were climbing a number of places.”

Alonso identified two other strong performances so far this season. “Sprint qualifying in Silverstone was also fun and so was Hungary for obvious reasons,” he said. “We’ve had some good races this year and importantly we’ve been consistent. We need to keep up this consistency and score more points for the team to finish the season on a high.”

This weekend’s race will be his first at Istanbul Park since 2011, when he took his fourth podium at the track with third place. He has never failed to score at the venue.

“I have some nice memories of the Turkish Grand Prix,” said the Alpine driver. “It’s a circuit with a good mix of high-speed corners and overtaking opportunities. Turn eight is a unique challenge and I look forward to tackling this corner in a modern-day Formula 1 car.

“I had a fun battle with Michael [Schumacher] there in 2006. He was right behind my gearbox exiting the final corner on the last lap. That was just one of a number of on track battles we had that season.”

The Saudi Arabian Grand Prix promoter has revealed new images of construction work at the Jeddah Corniche Circuit, which is due to hold its first race in December.

Alpine has become the latest manufacturer to confirm it will enter the World Endurance Championship’s Hypercar class with a pair of LMDh cars, beginning in 2024.

“By competing in both Formula 1 and endurance, Alpine will be one of the rare brands to be present in the two key disciplines of motorsport,” said CEO Laurent Rossi. Ferrari has previously announced it intends to return to the category in addition to its F1 effort.

Top technical staff from Mercedes’ F1 team including chief technical officer James Allison will help co-owner INEOS develop its yacht to compete in the upcoming America’s Cup race. Geoff Willis, who is part of their Applied Science division, will also serve as technical director on the project. The design team is based at the F1 squad’s headquarters in Brackley.

Look who’s here and getting setup in his new office. 👋

A little ROP Testing at @IMS tomorrow for @RGrosjean. The mound will be open – see you in Turn 2?#AllAndretti #INDYCAR #IsItMayYet pic.twitter.com/tYeTjMKGED

"You know people like that who are delivering results on track deserve opportunities, young drivers like that and I’d hate to see him not get a chance in F1 because I think he deserves it."

Ecclestone criticises reports F1 will have 23 races next year, saying it will anger fans and destroy interest in television broadcasts.

"Now TV, the media entertainment arm of HKT, and Formula 1 have announced an agreement to bring the FIA Formula 1 world championship to Now TV viewers in Hong Kong for the 2021 and 2022 seasons."

"Electric cars with our components can by now be found on roads around the world. By continuing in our role as official sponsor of Formula E and supplier of tried-and-tested motor racing technology to the first purely electric racing series, we’re demonstrating that we’re the number-one partner for electric driving."

Formula 1’s switch to synthetic fuel will only pay off if the technology has real-world applications, says Dave:

If this has the ability to change to overall market place for ICE fuel, great. But as way of reducing the emissions of the sport it’s over-sold.

The race cars produce a fraction of the emissions attributable to the sport. If we can put this in the aeroplanes and trucks etc… it would be great too.
DaveW (@Dmw)