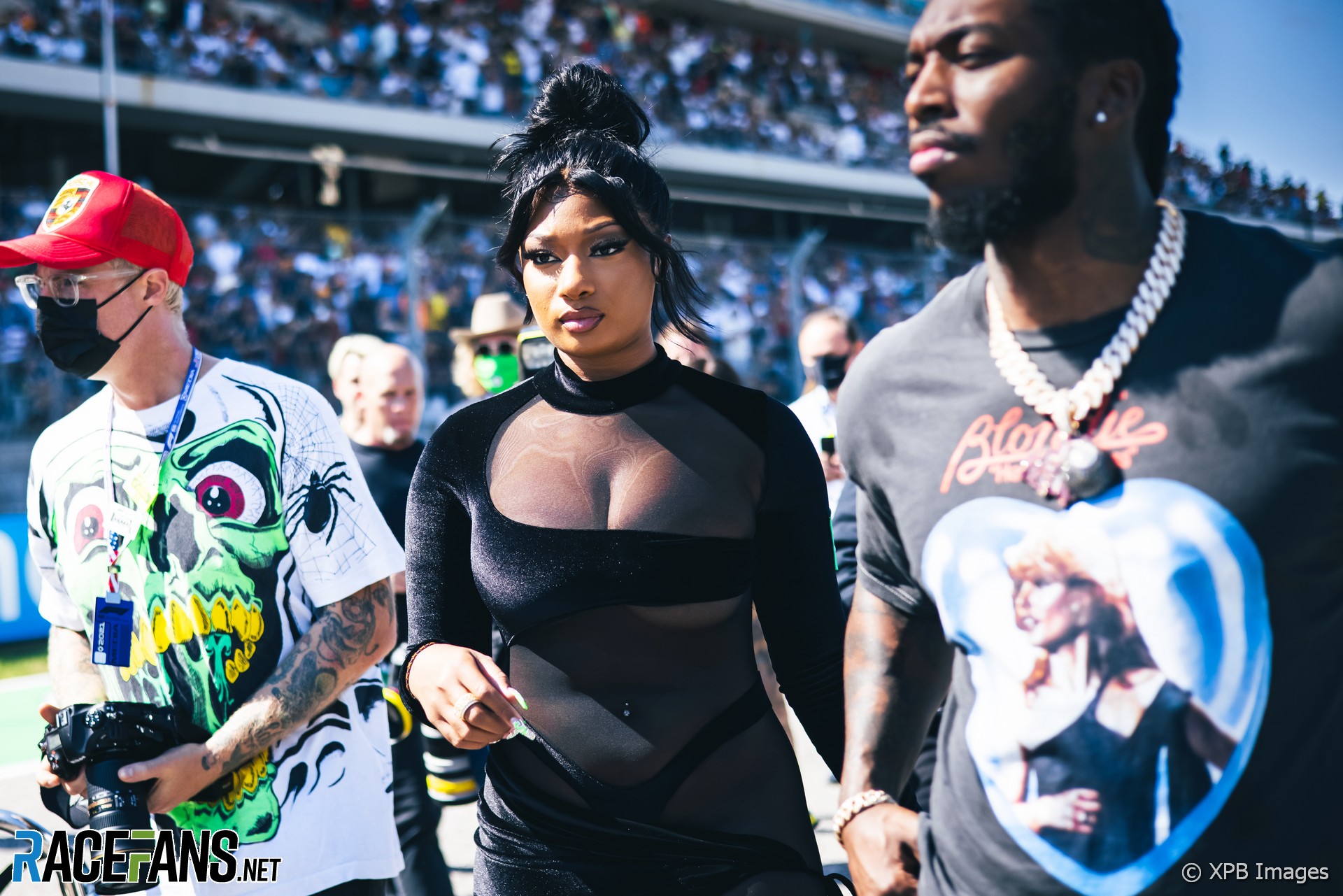 In the round-up: Formula 1 has changed its grid procedures for celebrities following Megan Thee Stallion’s notorious appearance at the United States Grand Prix.

Formula 1 has revised its grid procedure for celebrities after footage went viral showing a run-in between Martin Brundle and Megan Thee Stallion – plus her entourage – at the United States Grand Prix.

The Le Mans 24 Hours winner, World Sports-Prototype champion and veteran of 158 grands prix, now in his 25th year as an F1 broadcaster, attempted to interview the 26-year-old Texan rap star on the grid before the race at the Circuit of the Americas. While the rapper laughed off Brundle’s approach, her companions dealt with the Sky commentator in a more heavy-handed fashion.

RaceFans understands the policies are not this drastic. Celebrities will be asked not to bring security attendants onto the grid, which is already well policed, but stars are not required to give interviews. They will be reminded of the need to be courteous if approached by the media.

Mexican GP “one of my best” despite lap one crash – Tsunoda

Yuki Tsunoda was pleased with his performance in the Mexico City Grand Prix despite frustrating the Red Bull team and retiring in a crash within seconds of the start.

“Even though I didn’t even finish the first lap of the Mexican GP, I feel my performance up until Sunday was one of my best of the season,” he said. “For the third race in a row I made it to Q3, I had good pace all weekend long and generally felt confident in the car.

“My first visit to Mexico didn’t disappoint, it was such an amazing experience, the fans are so passionate, and it was so great to see.”

Haas team principal Guenther Steiner says the team is keen to retain its reserve driver Pietro Fittipaldi, who drove for the team twice last year as a substitute for the injured Romain Grosjean.

“Pietro is a very good guy, he’s a very good driver and he’s now a part of our family,” said Steiner. “We always can’t do without him but last year when Romain had his accident and he had to jump in, he did a fantastic job not having been in the car for almost one year. Pietro is one of us and hopefully he stays on with us.”

For the avoidance of doubt I don’t care who visits the F1 grid, the more the merrier. Talk to me, ignore me, shove, wave, hug, call me names, whatever makes you happy. All I ask is that you soak up the atmosphere, enjoy the privilege. I’ve not asked for any grid protocol changes

F1 comes to London! Plans to build a new East End circuit at the Royal Docks are at an advanced stage (Daily Mail)

"The consortium have been in talks with F1 about introducing the London Grand Prix to the race calendar in addition to the British Grand Prix at Silverstone. The proposal has the full support of London mayor Sadiq Khan, who wants to bring F1 to the capital before his second term ends in 2024."

Surgeries, rehab and a possible return to F3: What’s next for Correa? (F3)

"I would like to have more of a life next year. I feel like the last two and a half years I have been living in a jail of my own choosing, because all I do is rehab, train, sleep, work, drive. Everything revolves around this, and I am starting to feel the mental toll that is taking. I am a bit tired, and I feel like I am in a bit of a cage, so I need to find a bit of a balance next year, that is one of my goals."

Why Verstappen’s Mexico performance reminded me of Michael Schumacher (F1)

"Michael Schumacher used to spend a long time walking a track on the Thursday before a race weekend. He would look at corners and check out the escape routes if things go wrong. He would then know if you can escape safely from a bold move and be more confident of making that move. Max sussed out the first corner very well in Mexico and had the confidence to pull it off."

"This year, it definitely was a miracle for us to do Asian F3 plus Euroformula. We raised quite a bit of money, when we think about it. It was not easy, but we have a lot more to show to sponsors, and our meetings are going really well. It’s looking very positive, and we’ll try our best. I think it’s going to be a big step, and I’ll make sure I’ll be ready for it."

"According to FIFA statistics site Futwiz, Verstappen — who goes by the gamer tag 'crgboy007' online — was ranked 21st in the world in the FIFA Ultimate Team game mode in January 2019, while he reached 31st in the world in August 2018."

"Saudi Arabia’s emissions are strongly influenced by its biggest company, the oil giant Saudi Aramco, and it is thought to be concerned about revealing information about its performance."

How far is too far when it comes to ‘gamesmanship’, asks @Tricky:

I am always fascinated when does gamesmanship cross the line. Bottas trying to steal the fastest lap, when he cannot get a point for it, but then it is still put in the record books – and he might now hold the lap record for a while if the new generation cars take some time to catch up.

Any driver deliberately driving slowly? This is not the first time of course, and if you build the gap, it’s up to you how you use it.

I think in this case it was a great, but I wonder when does a line get crossed? E.g., going off track to cause a yellow flag while someone is trying a fastest lap in the race – too much? Stopping your car on track to cause a Safety Car in the last few laps when your team mate looks likely to get overtaken?
@Tricky