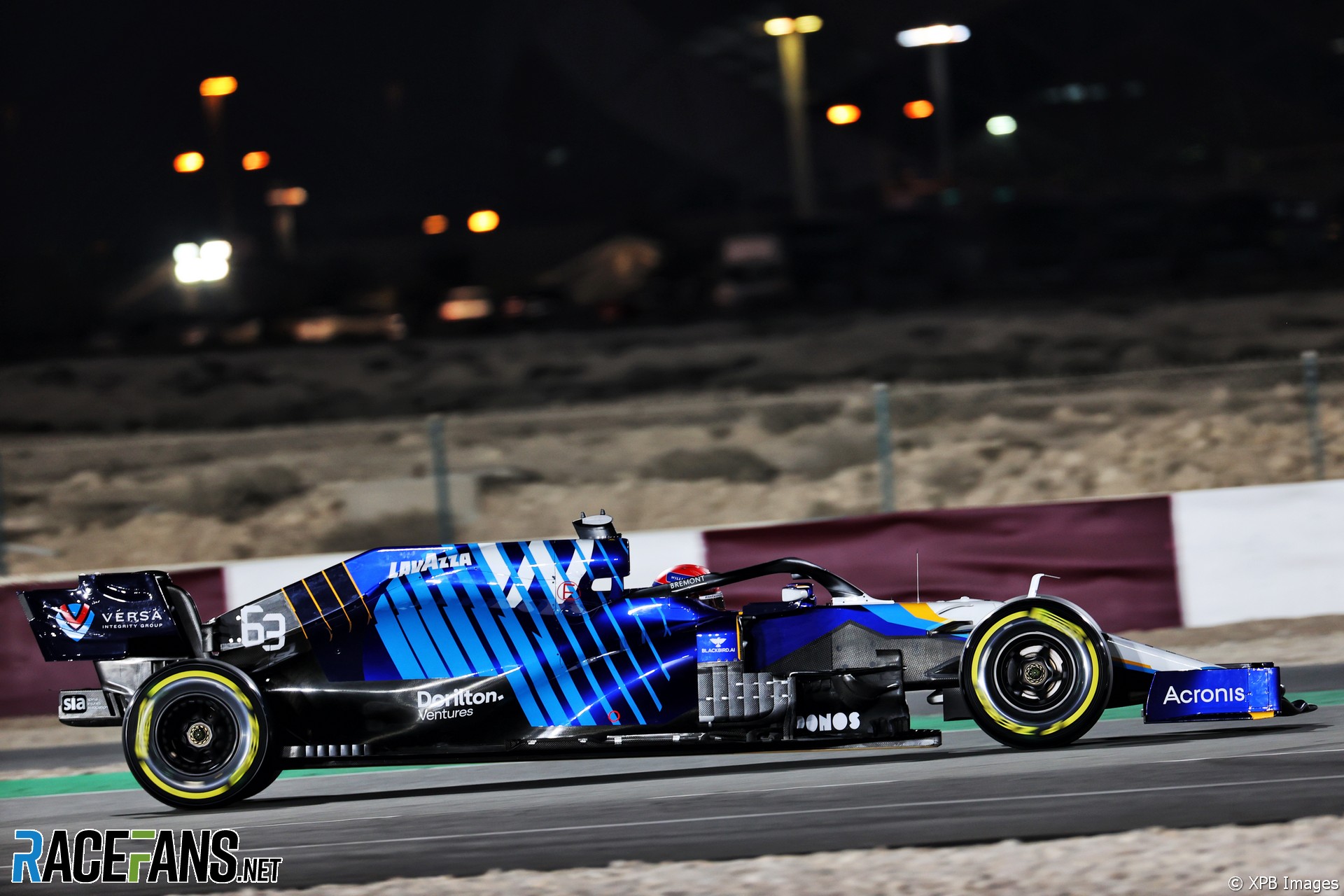 Williams’ downturn in form over recent races came as no surprise to the team following its mid-season run of points scores.

The team which finished last the previous three seasons lifted itself to eighth in the standings with four points scores in five races beginning at the Hungarian Grand Prix. It hasn’t troubled the scorers since.

George Russell has made several impressive qualifying performances for the team, most recently at Sochi where he claimed third on the grid in a rain-hit qualifying session. But he wasn’t able to reach Q3 in the five subsequent rounds.

The team’s head of performance engineering Dave Robson said it had taken advantage of favourable conditions which suited the traits of their wind-sensitive FW43B chassis.

“There’s been ups and downs through the year,” he explained in Qatar. “We know where the weaknesses are, we know that the wind plays a part.”

He said the team was “fortunate with the conditions” at some rounds, such as the British Grand Prix, where Russell qualified ninth on a dry track.

“Qualifying in Silverstone suited us perfectly and that’s the kind of track that naturally suits the car well,” said Robson. “Doing the Friday evening qualifying session when it was cool and an incredibly still really played to the car’s strengths and I think that was genuine pace.

“We haven’t had as many of those kind of sessions at those kind of tracks as we would like. In Austria, we were strong, I think that was through making good decisions with the downforce level, getting the most out of the tyres and conditions being reasonably favourable.”

Russell took advantage of rain-hit qualifying sessions in Belgium and Russia to take second and third on the grid respectively for those races.

“In Spa, the car was reasonably good there, but I think we genuinely did a good job. Same in Russia. So those kind of wet sessions we did just do a good job and got into a position that the car obviously didn’t deserve.”

The team has had a more difficult run of races since. Its best in that time was 13th place for Russell in the Sao Paulo Grand Prix.

“The last couple of races were a struggle,” Robson admitted. “I don’t think we were massively surprised that they were a struggle, and I think we sort of returned to normal eighth/ninth fastest car this weekend over a lap.”

Teams were only permitted to make limited changes to their 2020 cars this year as a cost-saving measure. Robson said the revisions Williams made meant it has “just been quick enough when we’ve needed it that operationally we could make a difference, and that’s something we didn’t have last year.”

“The car does have some strengths,” he added. “I’d love to take it back to Mugello, I think it would be quite good there.”

While Williams’ points-scoring has flatlined, Alfa Romeo has edged towards them thanks to a pair of eighth-place finishes for Kimi Raikkonen. Robson said the team won’t relent over the final races as it seeks its best finishing position in the championship since 2017.

“I think it’ll only be when the when the chequered flag drops in Abu Dhabi that we’ll really back off and I think we’ll all feel unbelievably tired at that point. But at the moment it’s full steam ahead and do everything we can to get the best results, irrespective of how the battle with Alfa plays out.”