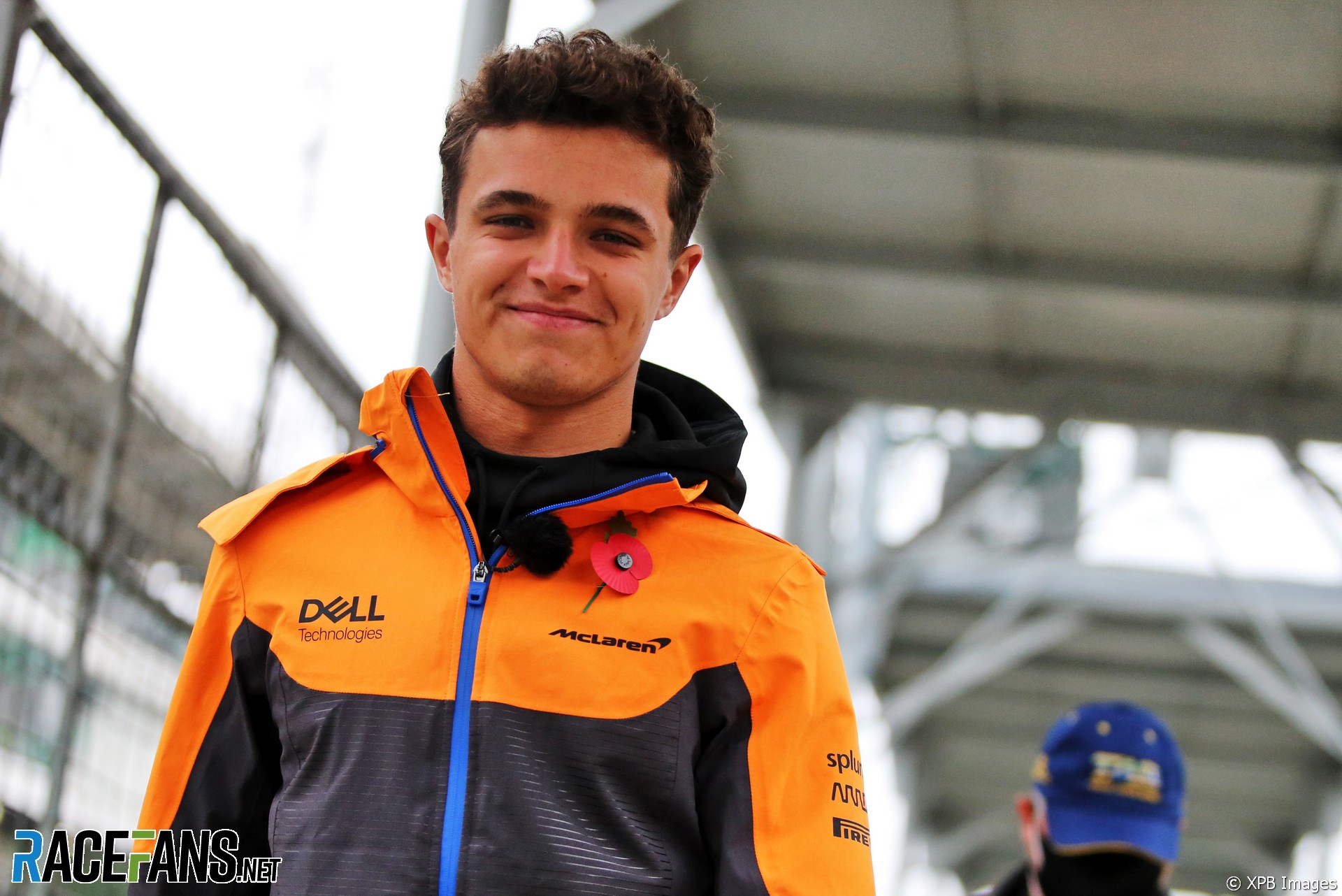 Lando Norris revealed he chose to extend his deal to drive for McLaren despite approaches from rival teams.

The 22-year-old, who has driven for McLaren since making his grand prix debut in 2019, enjoyed a strong campaign last year. He finished on the podium four times and claimed his first pole position in Sochi, coming close to winning the race.

McLaren confirmed today Norris has signed a new deal which will keep him at the Woking squad until the end of 2025. It comes less than 12 months after his last contract extension, which was announced prior to last year’s Monaco Grand Prix.

Since then Norris’s increasingly impressive performances prompted interest from rival teams. “There was little chats here and there,” he admitted, “but that’s all, nothing went far.”

Norris wouldn’t elaborate on which teams came knocking, but multiple top teams had vacancies to fill for 2022. However he insisted his priority was remaining at McLaren, and treated any approaches from rivals as a prompt to meet with team principal Andreas Seidl.

“As soon as something came up, that’s when I would then continue to go to Andreas and have a little conversation about what our future holds and so on.

“There was little things, no point lying about it, those little things here and there with various other teams. But nothing went far at all.”

Having joined the team as a test and reserve driver in 2017, Norris has been with McLaren throughout the rebuilding process instigated by Zak Brown following his arrival as CEO. Progress has been clear – the team’s slip from third to fourth in the championship last year was arguably a by-product of it over-performing the previous season.

But there is more to come, most significantly from a major infrastructure project including the construction of a new wind tunnel. Norris said he wanted to demonstrate his belief in the direction the team has taken.

“This is more just for the solidarity of me and the team, for the confidence in us both,” he said. “Just to really put the confidence in both of us for the long-term, because I see those as a benefit one for myself to have like this longer contract and stay for a while and then one for the team.”

Norris believes having a long-term deal in place can ultimately serve to improve the team’s competitiveness by inspiring the staff at the McLaren Technology Centre.

“I do see it as a performance benefit and motivation benefit for the mechanics, for the engineers, for everyone in MTC,” he said. “So if I want to try and find every bit of performance, then that is included in something like this.

“It’s not just purely in the race car, there’s the other areas as well, and this is definitely one of them. So it was another opportunity for me to confirm my commitment to the team, for them to confirm it with me and give the whole team the confidence that I’m here to stay and I want to keep trying to achieve things with them.

“I think that’s a great thing for the team. That’s why it’s say for my own belief, I want to do it because I believe it’s a big motivator for them.”

The team is going into the first season under F1’s drastically revised technical regulations. However Norris is not concerned McLaren’s recent gains will be reversed as it navigates the transition to a completely different rules set.

“For the next four years there’s a heavy commitment from my side to just commit to doing what I want to do, and achieving stuff with the team,” he said. “Especially coming into this year, the logical thing or the thing a lot of people would think is to just stay with my previous contract, which would have ended at the end of the next year or whatever, when we’re so early in this new era of cars and the new regulations and so on.

“But of course, I knew there was an opportunity for other teams to make big steps forward and maybe we go backward. But I don’t think that’s something I need to be worried about. I’m confident in the team that we can still have a good season this year, and whatever happens this year doesn’t mean we might be struggling for the next five, 10 years.”

McLaren ended their nine-year wait for a grand prix win last season. Norris’s new deal is a vote of confidence in their ability to keep building on that and become championship contenders once again.

“I have belief that even if we have a tougher year this year – which I don’t think we will and I’m confident that we won’t – over the next two years and three years, and when we get the wind tunnel up and running, then we can then make that the progress we need. I’m confident we can be back towards the front, even more so than what I’m hoping we can be this year.

“So of course, there’s things here and there, like there is in every single person’s contract. But in terms of my commitment it’s very high. So I’m confident I’ll be here for the next four years.”