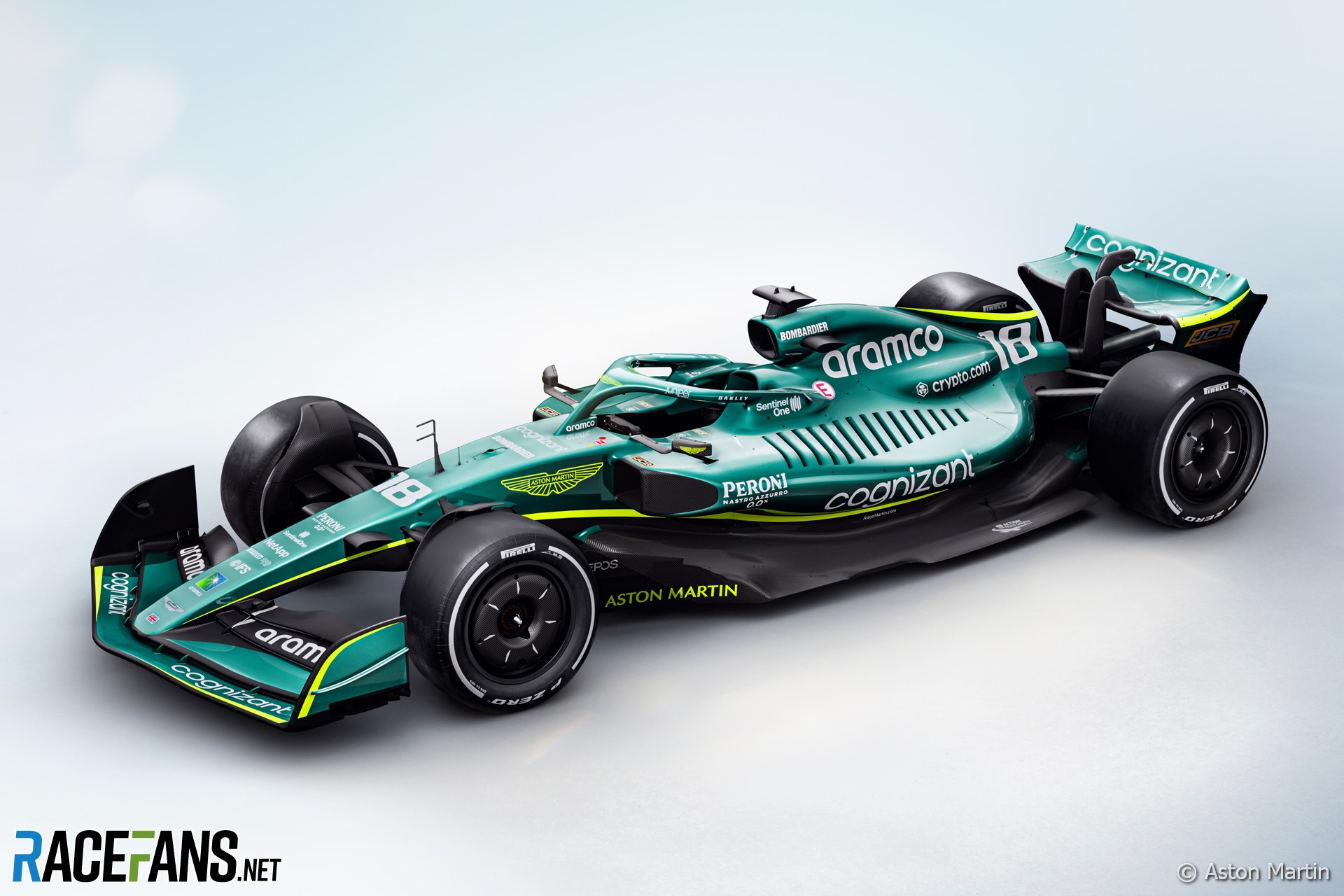 Aston Martin became the first F1 team to unveil a ‘real’ 2022 contender yesterday. Its AMR is due to complete a shakedown at Silverstone today before heading to pre-season testing in Barcelona which begins in less than two weeks time.

With the second pre-season test scheduled so close to the first race, Aston Martin was confident in showcasing a car that will bear a close resemblance to what it intends to run at the beginning of the season.

The AMR22 is an all-new design with “little carry over from last year’s car”, according to technical director Andrew Green. However, some key features seemed to have stuck around.

Notably, the roll hoop and intake seem to be largely unchanged and the ‘bulge’ on the engine cover is carried over. The distinctive bump in the cover is likely due to the Mercedes HPP Powertrain configuration: A stipulation for a ‘blister’ was added in the fourth draft of the 2022 (previously 2021) rules.

While there had been rumours about front suspension with pull-rods potentially being adopted by teams this year, it seems that Aston Martin has kept the push-rod concept at the front. Aston Martin has confirmed the rear suspension is from Mercedes to match the gearbox design, so expect to see a similar design on the rear of the W13 car.

In some images of the AMR22 issued by Aston Martin, the front-right push-rod was missing – but this was simply a rendering error, not a radical asymmetric design feature!

The car revealed by Red Bull earlier this week bore a close resemblance to the model presented by F1 at Silverstone last year. In contrast, the AMR22 features some notable differences.

The first eye-catching feature is the cooling louvres on the sidepods. The 2022 regulations allow for the return of these openings that were banned back in 2009. From the plan view, 15 can be seen on either side.

These louvres vent hot air around the middle of the car and their design allows Aston Martin to significantly reduce the rear cooling exits, helping to reduce drag. It is likely that these louvres are configurable and will be covered at races where such levels of cooling are not necessary.

The sidepod inlet is notably smaller than the FOM model, a trait shared by the Haas F1 team’s render launched earlier this week. With cleaner airflow available from the simplified front wing, both teams seem to have been able to significantly reduce the inlet cross-sectional area.

Notably, the inlet hugs the inside of the vehicle, closest to the centreline of the chassis to intake the cleanest air possible. The ‘blanking’ of the intake of the sidepods on the AMR22 could increase static pressure behind the front wheels to help outwash the front tyre wake.

From the top view, it’s obvious that the AMR22 lacks the ‘coke-bottle’ form familiar from years of past F1 cars. Unlike the Haas VF-22, which aggressively cuts in towards the rear of the vehicle, the AMR22 is much more bulbous in shape. Even compared to Aston Martin’s own car from last year, the AMR22’s sidepods seem to be wider at the rear.

This may be to help guide the outwash from the tyres away from the rear wing or may indicate a larger amount of cooling required for the new 2022 Mercedes HPP Powertrain. Although the sidepods at the top are wider, they feature much more aggressive undercuts compared to the VF-22.

Andrew Green cast some light on this obvious area of difference to the Haas design. “We’ve explored one route, and I know that there are plenty of other routes available,” he said.

“One of the design requirements for the car was to give ourselves flexibility. I don’t want us designing a car down a development cul-de-sac. I wanted us to be able to move and be able to research different areas relatively freely in 2022. So the ability for us to change radiator layouts and sidepods is on the table for us in 2022.”

The approach to the front wing design is also distinctive. While the 2022 F1 regulations have much stricter definitions for the front wing than previous years, it seems that Aston Martin has taken a different approach from the FOM show car and Haas’ VF-22.

The curvature of the front wing’s top element, just inboard of the tyre, is more subdued than the VF-22 and the FOM show car. Aston Martin has also opted for a single element to be detached at the bottom of the nose and its angle of the first element suggest it is being used as a slat to keep the flow smoothly attached along the underside of the nose.

From the side view, the front wing also appears to sit a bit higher off the ground than the VF-22 and the FOM show car. This is likely to further prioritise the underfloor aerodynamics, but of course teams can adjust their ride height – so it may not be entirely indicative of design.

It is also interesting to note the step-change on the edge floor near the centre. This little edge wing could help provide some up-wash and out-wash around the outer edges of the floor to prevent air re-entering the underbody tunnels ahead of the diffuser.

Additionally, it is interesting to note that the AMR22 seem to have brake cooling ducts that are larger than those that were presented on the FOM model. This is likely due to the fact that the AMR design has accounted for the actual amount of cooling required but is interesting to see nonetheless as these inlets were notably missing from the VF-22 launch renders.

As the aerodynamics in this new era of Formula 1 will largely be dominated by the floor, most aero related innovations are likely to have been hidden from view. This is the most critical area to car performance which we have not seen in detail yet.

It is also likely that the floor that was showcased is not race specification, which is nothing new in F1. Many F1 teams have launched cars in previous years with non-race spec floors.

With the AMR-22 launch, we got the first real insight into what these new 2022 cars will look like on the grid in Bahrain. While it may largely be a first iteration to ensure the car can run today while not giving too much away, there are several hard points of design that Aston Martin have showcased that will likely be carried through shake down, testing, and ultimately onto the grid in March.