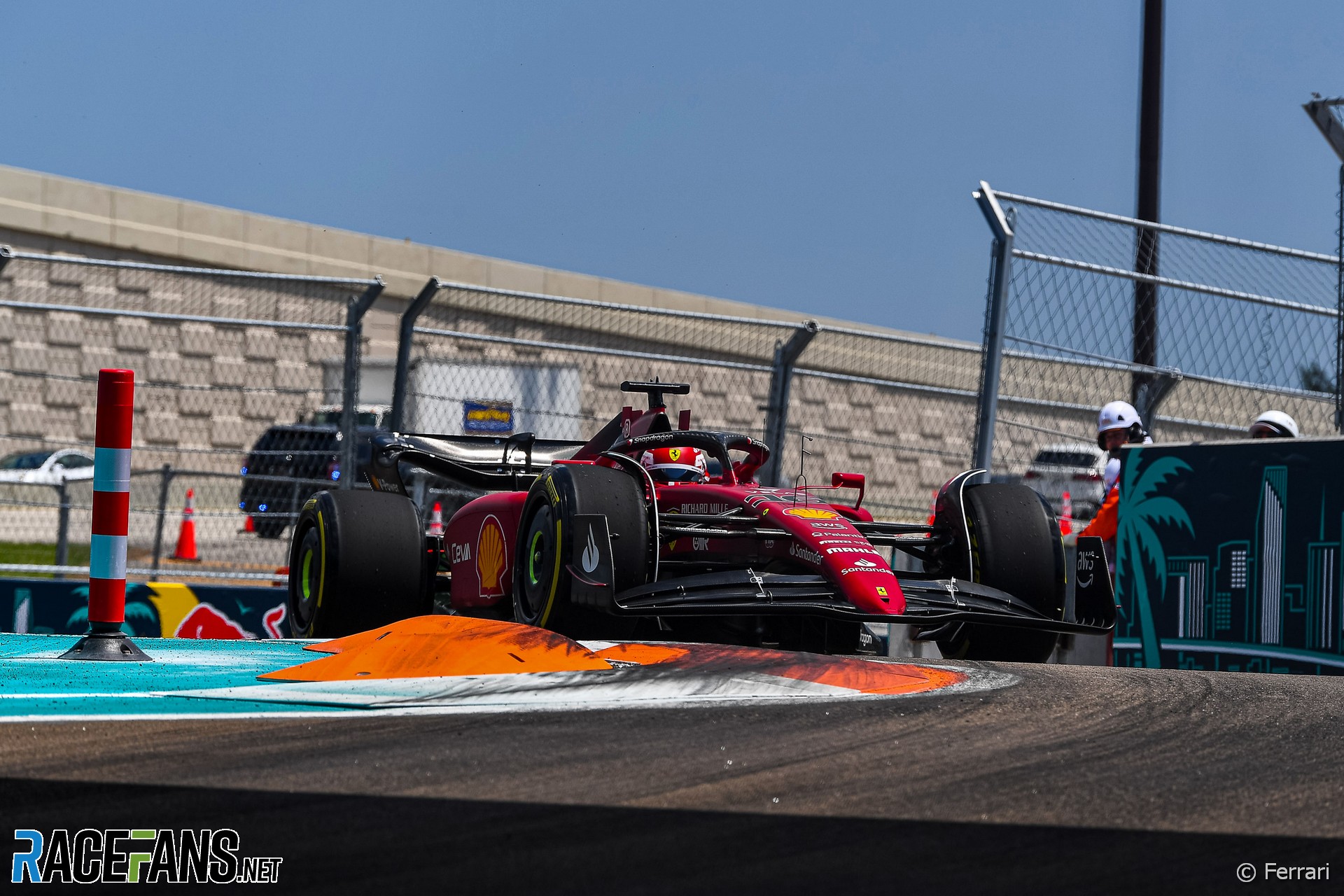 Championship leader Charles Leclerc was fastest for the first ever practice session in Miami as Valtteri Bottas crashed at the marina corner.

The Ferrari driver was less than a tenth of a second faster than George Russell’s Mercedes, with the two Red Bulls of Max Verstappen and Sergio Perez third and fourth.

Slight cloud cover over the circuit could not prevent temperatures from breaching 33C as the green light at the end of the pit lane signalled the start of the very first official session to be held at the Miami International Autodrome.

Unsurprisingly, all 20 drivers wasted no time in taking to the track and getting acclimatised with the 5.4km circuit, with many drivers quickly learning where the limits of grip were over the 19-turn.

Verstappen was the first driver to brush the wall, kissing the barrier on the exit of turn 16 entering the long back straight under the tunnel. Soon afterwards, Leclerc had a spin at the first corner, but was able to continue.

Leclerc’s spin did not slow him down, and he eventually set the early benchmark of a 1’32.949, before Russell went second quickest by setting a lap one-thousandths of a second slower than the Ferrari.

Esteban Ocon was placed under investigation by the stewards for an unsafe release from the pit lane in front of Russell’s Mercedes – the Alpine driver was penalised for the same infraction during the previous race at Imola. Meanwhile Carlos Sainz Jnr and Mick Schumacher had a disagreement after the Ferrari came across the Haas into the tight sequence in the second sector.

Verstappen’s running was heavily compromised by overheating problems on his Red Bull. He was called in on multiple occasions due to his car running too hot, meaning he would spend considerable time in the garage receiving work.

With half of the session gone, Sainz had moved fastest with a 1’32.443, with Lewis Hamilton two hundredths slower in second. Then, with just over 25 minutes remaining, Valtteri Bottas brought out the red flags after losing control at the marina corner of turn seven and crashing backwards into the barriers.

After a short delay while the crashed Alfa Romeo was recovered, the session resumed with less than 20 minutes remaining.

Sainz had a high speed spin exiting turn four, pitching his Ferrari through 360 degrees, but somehow avoided the barriers. However, the spin destroyed Sainz’s tyres, causing a puncture on his right-front and forcing him to limp slowly back to the pit lane.

After his earlier overheating problems, Verstappen was eventually allowed back onto the circuit and immediately lowered a new fastest lap. He would improve his own best time, before Leclerc jumped to the top of the times with a 1’31.098, which would ultimately prove the quickest time of the afternoon session.

The chequered flag ended the first of the day’s practice hours with Leclerc fastest, just 0.071s ahead of Russell’s Mercedes. Verstappen was third fastest, under two tenths behind Leclerc, with team mate Perez in fourth.