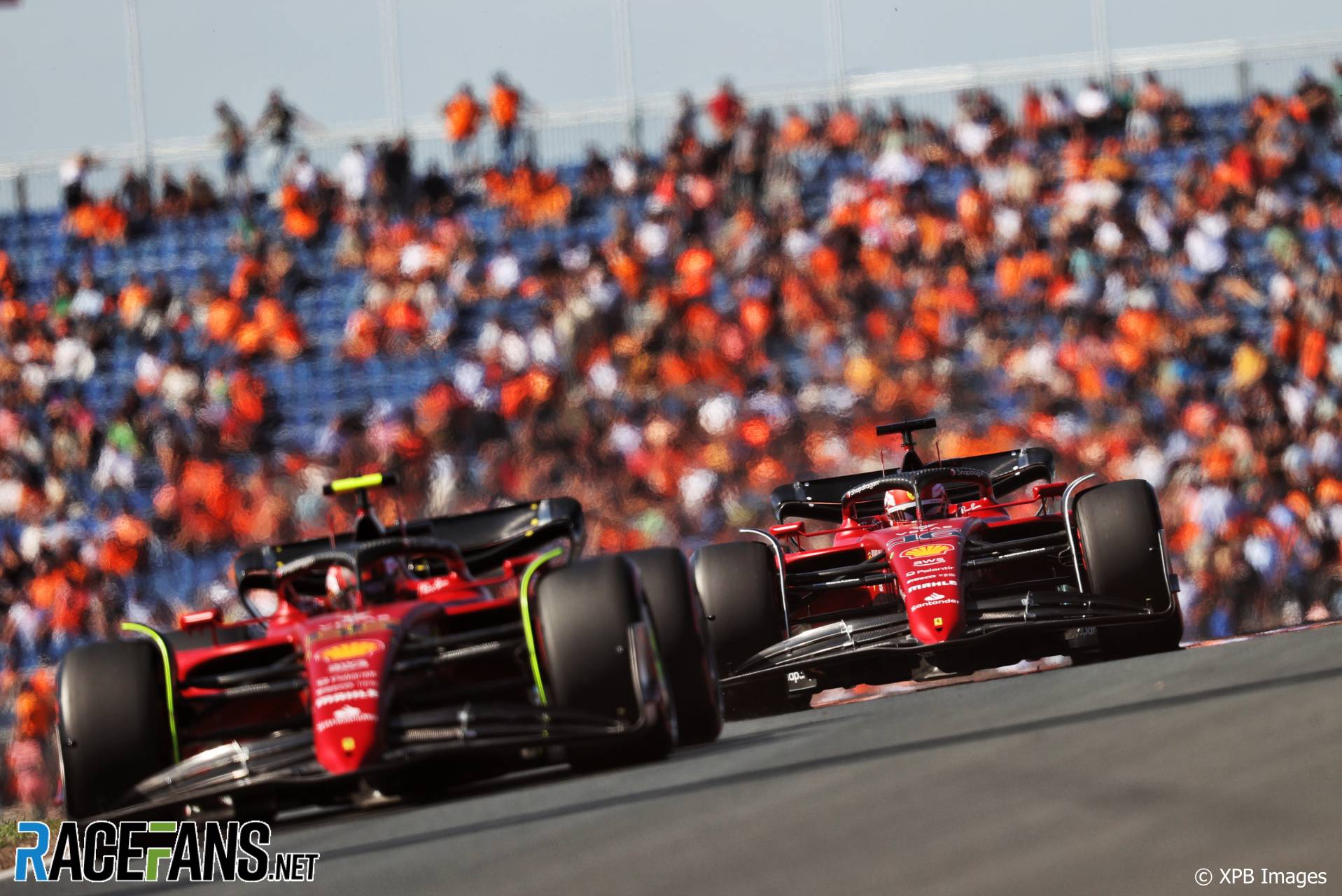 In order to bring the historic Zandvoort circuit up to the high standards demanded to be able to revive the Dutch Grand Prix, millions of Euros worth of renovations were required to transform the track’s infrastructure, pit lane, grandstands and more.

But after qualifying for the second grand prix to be held around the revised venue, Charles Leclerc could be forgiven for cursing the circuit’s operators for not shortening the track’s layout by 80 metres. Because it was only over that short distance at the end of the 4.259 kilometre lap that Max Verstappen dipped beneath the Ferrari driver’s lap time as the pair sprinted to the chequered flag at the end of Q3.

Verstappen’s second home pole position in as many attempts was a remarkable turnaround for Red Bull after he missed most of first practice and ended Friday nearly seven-tenths of a second slower than his Ferrari rival. But it was also just as much a missed opportunity for Leclerc, who had been at least a quarter of a second faster than Verstappen until losing most of that advantage through turns nine and ten in the middle sector.

After being told by his team that Verstappen had beaten him to pole by just 0.021 seconds – the tightest margin of the season – Leclerc, not for the first time this season, let out a shout of frustration. He had to admit his surprise that a relatively minor error had been enough for him to lose pole to his rival after their comparative pace leading up to Saturday afternoon.

“Obviously you always targeting to be on pole and, looking at my lap, in turn ten I did a mistake,” said Leclerc. “To be honest, looking at the gap with Max today, I did not expect that coming into Q3.”

A home pole position is always one to savour, but making his 100,000-plus fans in attendance roar with delight after being so far off from Ferrari to start the weekend was especially satisfying for the man on a seemingly unstoppable charge to a second world championship.

“It was a special qualifying, especially after yesterday,” Verstappen said.

“It was really tough, we had to change the car around quite a bit, because we didn’t really have any information. Basically this morning was still about learning quite a bit of the car and all about just trying to fine-tune it a bit towards qualifying.

“When I started my lap, I felt like the tyres were not really switched on, but I managed to recover a bit in sector two and that was just enough for pole.”

After back-to-back races with Verstappen starting out of position down the field, this weekend he will start with both Ferraris directly behind him for the first time since the Austrian Grand Prix, where Ferrari had the upper hand in the race and out-paced Verstappen to victory. Starting third, Carlos Sainz Jnr is hopeful Sunday’s race will play out more like it did at the Red Bull Ring.

“In qualifying, we’ve been within a tenth of each other,” he said. “So in the race, if it’s like that for 70 laps, it’s going to be a tight race.

“Normally, the Red Bull lately on Sundays – together with Mercedes – seem to have something there that we haven’t had recently. But if we go back to France and Austria, we had something on Sunday. So hopefully it is more like those two races and we can challenge Max during the whole race.”

But unlike the Red Bull Ring with its minimal corners and long straights, there are far fewer opportunities to pass at Zandvoort. Although an extended DRS zone for this year may help, the start could be even more vital than typical this season.

Formula 2 driver Marcus Armstrong showed that starting on the dirty side of the grid – as Leclerc will on Sunday – is not necessarily a disadvantage, as he leapt into the lead of the sprint race, but Ferrari are well aware that Verstappen has the benefit of an extra set of fresh soft tyres to help him get the best possible launch off the line.

“Obviously Max with a new set of softs is going to be strong whenever he uses it,” said Sainz. “Because here from scrubbed to new [tyres], at least for our car, is quite a bit of a difference as the degradation is very high.”

Pirelli believe that a one-stop strategy starting on the softs and switching to the hard tyres is perfectly viable, but admit it will leave one-stoppers marginal for tyre wear over their two stints. A two stop is considered the fastest route to the chequered flag by the tyre supplier, but requires two sets of unused mediums – which Red Bull, Ferrari and Mercedes all have at their disposal.

With both Ferraris starting behind Verstappen, the team could opt to split their strategies to give Verstappen and his elite strategists on the Red Bull pit wall a headache during the race. Both Leclerc and Sainz believe this is the way to go. “Let’s see after the first few laps,” Leclerc said, “but probably splitting the cars is a good thing to do when we are in this situation.”

Sainz expects everyone will have challenges keeping their tyres in good working order over the course of the race. “It is very tough out there, especially with these heavier cars,” he said. “The track is really demanding on the tyres, we have a lot of overheating in the lap, a lot of degradation even in the long runs.

But it would be wrong to ignore the presence of Mercedes. After falling back into purgatory in Spa, both Lewis Hamilton and George Russell may have been far closer to front row on the times sheets had it not been for the effect Sergio Perez’s spin had on their final flying laps. With Hamilton starting fourth on the grid, he is confident that Sunday should be a more enjoyable race for Mercedes.

“I’m definitely optimistic,” said Hamilton. “I’ve not done a long run but George did and it looked quite good. The car was feeling strong today and I felt like I could go quicker, so I hope that translates to tomorrow. But I’ll definitely be pushing as hard as I can to get a podium.”

His team mate Russell, however, does not quite seem to match Hamilton’s level of enthusiasm. “We’re still lacking probably a couple of times of base performance,” he admitted. “Obviously it’s a short track here so the gaps don’t look as big.

“I think, as a team, we truly understand why we were so slow in Spa and why from the get-go we showed more promising performance this weekend. But ultimately Max and Red Bull are too quick for us. Our fight and battle is with Ferrari at the moment.”

Zandvoort is a narrow and tight circuit where there is very little margin for error. Despite this, there was no Safety Car intervention here last year. But all it takes is one mistake to see a car in the gravel or the barriers and strategies could be thrown into the air.

However, there is one final unique factor which could come into play at Zandvoort, that of an unusual environmental hazard. Not merely the thoughtless few spectators lobbing contraband onto the circuit, but the local birdlife, which has already proven the most dangerous element of the race weekend for drivers and themselves. Both Marcus Armstrong and Theo Pourchaire struck pigeons during the Formula 2 race.

“It’s very odd,” said Russell. “It’s just at that one corner, turn seven, these pigeons are just standing on the apex. “Ross Brawn’s probably happy there’s not so much outwash from the cars. Last year we would’ve blown the pigeons away…”

As silly as it seems, Verstappen has already lost one potential race victory this season due to striking debris at Silverstone. Hopefully our feathered friends don’t swing the outcome of Sunday’s race.

With the top six cars likely to be so close over the course of the race, even the smallest hazard could play a big role in deciding whether the Zandvoort fans go home satisfied or saddened on Sunday evening. But whatever happens, the championship leader can afford to take it in his stride.

“I think it will be close, but basically for most of the races this year it has been like that,” Verstappen said. “So I’m looking forward to it and I hope that we can have a good race.”

Will Verstappen delight his home fans with another win? Will Ferrari or Mercedes prove his biggest threat?

Share your views on the Dutch Grand Prix in the comments.