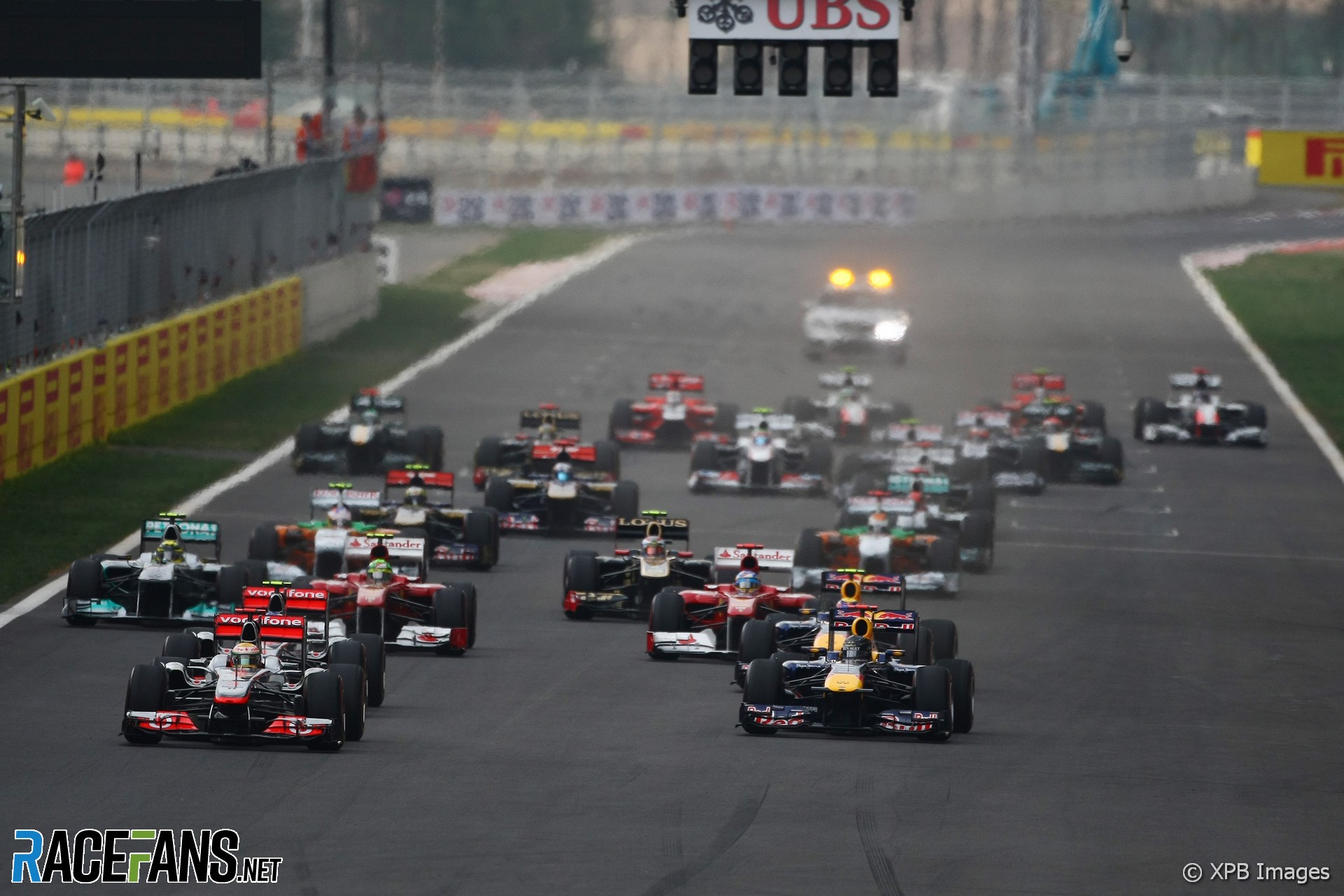 Sebastian Vettel dominated the Korean Grand Prix to win his tenth race of the year.

He passed pole sitter Lewis Hamilton on the first lap, was seldom headed throughout the race – and there was no repeat of last year’s engine failure.

Hamilton came under attack from Mark Webber but held on to claim second despite constant pressure the other Red Bull driver.

Vettel breaks through to lead

The long straights connecting the first, third and fourth corners made for a hectic start to the race. Hamilton won the short dash to the turn one but Vettel was instantly shadowing the McLaren, forcing him to defend.

Hamilton left an RB7-sized gap on his left they headed to turn four and Vettel was instantly down the inside, easing Hamilton wide and taking the lead.

A daring piece of late-braking from Felipe Massa allowed him to capture third from Jenson Button at turn three. The McLaren driver was crowded out as they headed down to turn four and found himself slipping behind Webber and Fernando Alonso. Webber then nabbed third place off Massa.

After an exciting first lap the race settled down, with Vettel edging away from Hamilton, particularly in the twisty middle sector where the Red Bull was strongest.

Ferrari lose out in the pits

Ten laps in, Button picked up his pace and began to put the Ferraris under pressure. He dodged around behind Alonso once or twice but couldn’t make a pass.

On lap 14 he and Nico Rosberg, who had joined the trio, headed into the pits. Rosberg got out of his box first thanks to another rapid Mercedes pit stop, but braked too late as he returned to the track, allowing Button to pass.

However that meant Rosberg crossed the DRS detection line behind the McLaren, and was able to easily open his wing and pass the McLaren into turn three. The next time past, Button used the same advantage to pass the Mercedes for good.

This tit-for-tat squabbling should have played into Ferrari’s hands – but it didn’t. They brought Massa in on the next lap but as Webber, Michael Schumacher and Vitaly Petrov arrived at the same time the Ferrari driver had to be held in his pit box before leaving, losing precious time.

Nor did things go any better for Alonso, who emerged from the pits between Schumacher and Petrov.

Petrov was defending his place from Alonso using his DRS as they reached turn three. But neither braked early enough for the corner. As Alonso took to the run-off Petrov had nowhere to go and collected the Mercedes of Schumacher, putting both out of the race.

That brought the safety car onto the track which gave Vettel some cause for concern as it brought Hamilton’s McLaren back within range. But despite the McLaren’s superior performance along the straights, Hamilton again couldn’t stay close enough to challenge Vettel through the rest of the lap. He was able to use DRS once to close within half a second of Vettel, but lost so much time in the final two sectors he fell out of range the next time by.

He now came under increased pressure from Webber, who was quicker than the McLaren after switching to the soft tyres for his second stint. Hamilton’s mirrors were full of the Red Bull for the rest of the race.

Massa and Alonso now set about trying to pass Rosberg, the pair finally get the job done on lap 27. Rosberg headed for the pits after that and dropped out of the top ten.

Webber’s attempts to pass Hamilton intensified in the second half of the race. Time and again the Red Bull driver had his DRS wing open and forced Hamilton to defend at turn three.

McLaren radioed Hamilton to pit on lap 34. As with Button’s first pit stop, the message was broadcast on the television feed. Red Bull seemed not to take account of that as they brought Webber in on the same lap, losing a chance to set some laps in clear air and potentially pass the McLaren.

Hamilton switched to soft tyres for his final stint but braked fractionally too late for turn four, allowing Webber alongside. This began the best piece of action seen in the whole race, the pair dancing side-by-side at high speed through turn seven, eight and nine, then again around turn 11, as Hamilton firmly but fairly rebuffed Webber’s attack.

The battle continued through the final stint as Webber consistently came off the final corner much quicker than Hamilton. On lap 49 he finally saw daylight, squeezing down the inside of Hamilton at turn one. But Hamilton’s KERS-assisted exit from the corner was so strong he probably would have passed the Red Bull even without the extra advantage of DRS. As it was, he was easily back into second.

Button had now caught this two-car battle and shortly afterwards Alonso arrived on the scene as well, having leapfrogged Massa by running late at his first stop. But the status quo remained between the quartet.

With no repeat of the late failure which cost him victory in the race last year, Vettel came home to win by a comfortable 12 seconds. He even had time to pump in the fastest lap of the race on his final tour.

Hamilton, Webber, Button and Alonso crossed the line within 3.6 seconds of each other, with Massa a further 9.4 seconds adrift.

Jaime Alguersuari capped a fine drive for Toro Rosso by passing Rosberg on the final tour for seventh. The Mercedes, usually one of the quickest cars in a straight line, was defenceless against the Toro Rosso which had been a good few kph quicker than everything else through the speed trap on Saturday.

Both Toro Rossos were in the points as Sebastien Buemi claimed ninth having passed Paul di Resta for the place on lap 50. The second Force India of Adrian Sutil came home 11th and Rubens Barrichello was the last driver on the lead lap.

Bruno Senna was a lapped 13th after a poor weekend for Renault. Heikki Kovalainen’s Lotus saw off both Saubers to finish 14th, team mate Jarno Trulli behind them in 17th.

Daniel Ricciardo brought his HRT home between the two Virgins and Vitantonio Liuzzi was the last runner after losing his front wing on the last lap.

Vettel celebrated his tenth victory of the year and, more significantly, Red Bull retained their constructors’ championship. There’s not much left for them to win this year, but so far there’s no sign of them stopping.

35 comments on “Vettel makes amends for 2010 with Korea win”