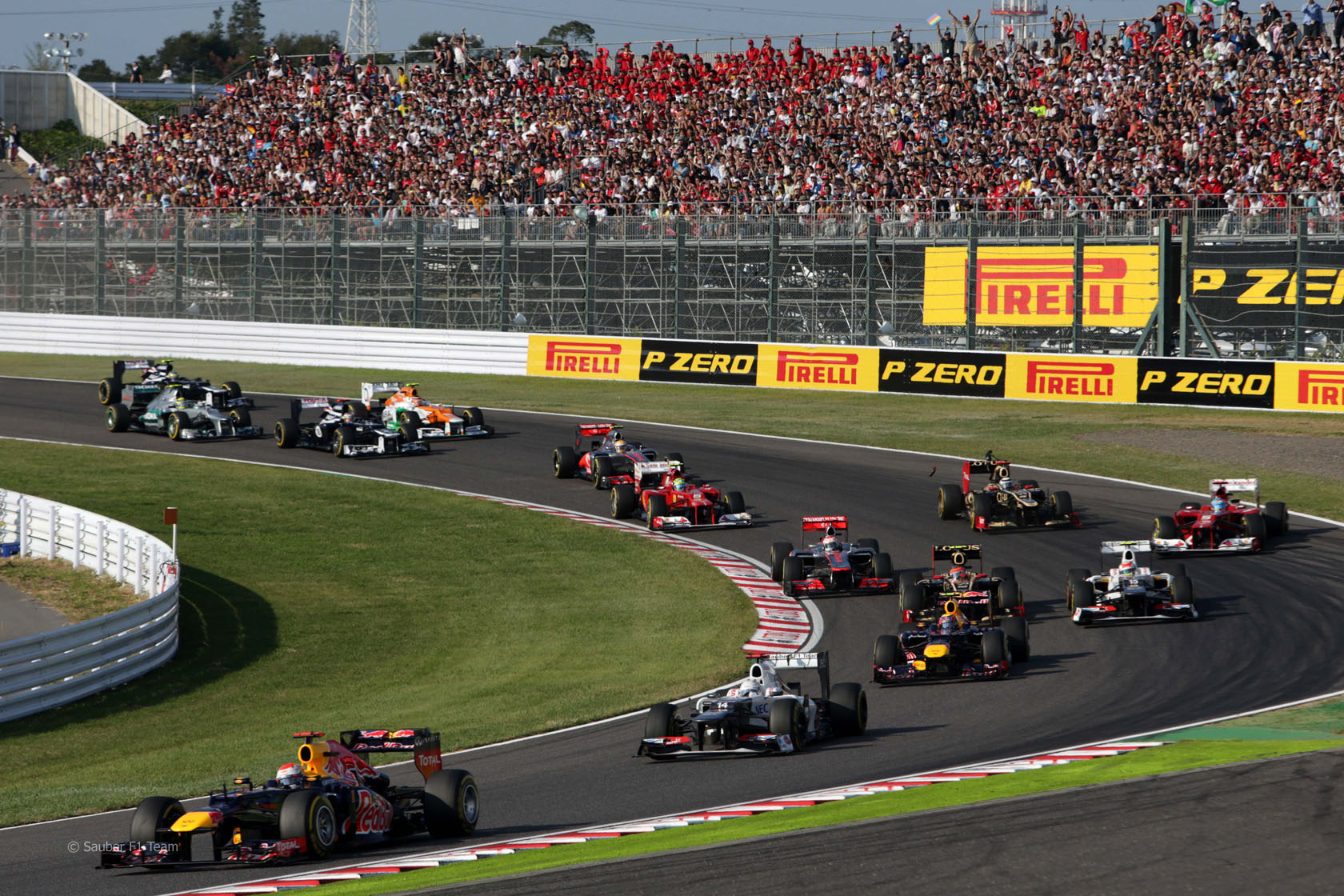 The Japanese Grand Prix ranked one place above the Singapore Grand Prix that preceded it, firmly in the bottom half of this year’s races so far.

An average score of 6.380 meant this was the second-lowest of the last five Japanese Grands Prix.

The race saw Sebastian Vettel stake his claim for a third consecutive world championship as he became the first driver of the season to score back-to-back victories.

Felipe Massa secured his first podium in almost two seasons by finishing second, while Kamui Kobayashi was cheered home by his fans to finish on the bottom step of the podium.

But must of the post-race discussion concerned the three first-lap crashes which ended the races of two drivers and included another costly blunder by Romain Grosjean:

Yet again Grosjean ruins the race for the front runners, Webber, Rosberg and Perez to an extent. If Vettel was once dubbed the ‘Crash Kid’, surely Grosjean has to be the ?óÔéĽ?ŁCrash Prodigy?óÔéĽÔäó.
Tom

I think the biggest shame to this race was what happened to Webber getting assaulted by “First-lap Nutcase”. It?óÔéĽÔäós likely he would have provided some challenge to Vettel?óÔéĽÔäós cruising victory.
James

A deserved result but a race ruined by first corner accidents. Vettel winning from Massa by 20 seconds means a parade not a race.
HoHum

Others thought the first lap drama added to the excitement of the race:

Solid eight out of ten. It had drama, it had karma, it had humour and bits and pieces of action.
Karthikeyan

I gave it eight out of ten. The race started with absolute chaos and it had some great battles throughout the field. It also really shook the championship up which is great to see this close to the end.
Smifaye

Broom’s comment spoke for the views of many who didn’t think much of the race:

I didn?óÔéĽÔäót enjoy it. I am happy to see a vintage Massa drive and delighted for Kobayashi but I enjoyed the podium ceremony with the fans chanting for Kobayashi more than the race itself.

Three out of ten.
Broom

However Mads though the race had much to commend it:

I think people have become used to have duels everywhere and overtakes every minute.

I find it refreshing to have a more old-school type race. Yes it wasn?óÔéĽÔäót an overtaking mayhem, and the DRS didn?óÔéĽÔäót work great, but it was all for the better I think. We had solid battles throughout the race, and it made for some excellent overtakes. Albeit few, most of them were the sort of, at the edge of your seat, overtakes.

It could have been better. A fight for the lead would definitely have spiced things up, but I think it was a solid seven out of ten still.
Mads

PJA was sure the race was run after Vettel hung onto his early lead:

Once Vettel converted the pole into the lead at the start I never thought anyone would challenge him for victory.
PJA

However others enjoyed some of the racing in the midfield including an entertaining exchange between Lewis Hamilton and the driver who will replace him at McLaren next year:

The Perez and Hamilton moments were great especially considering the recent developments. Round one, Perez catches Lewis sleeping with his door wide open. Lovely opportunistic pass.

But why on earth did Perez think Hamilton would fall for that one again? Awesome positioning by Lewis ?óÔéĽÔÇŁ but also awesome avoidance by Sergio. That could have gone wrong for both. Alas, Sergio was totally committed. A nice little lesson from Lewis there anyway and one I?óÔéĽÔäóm sure Sergio will take away and not make the same mistake again.
pSynrg

I loved the battle between Rosberg and Senna, and Button and Kobayashi too. Ricciardo nicely defended from Schumacher too.
BasCB