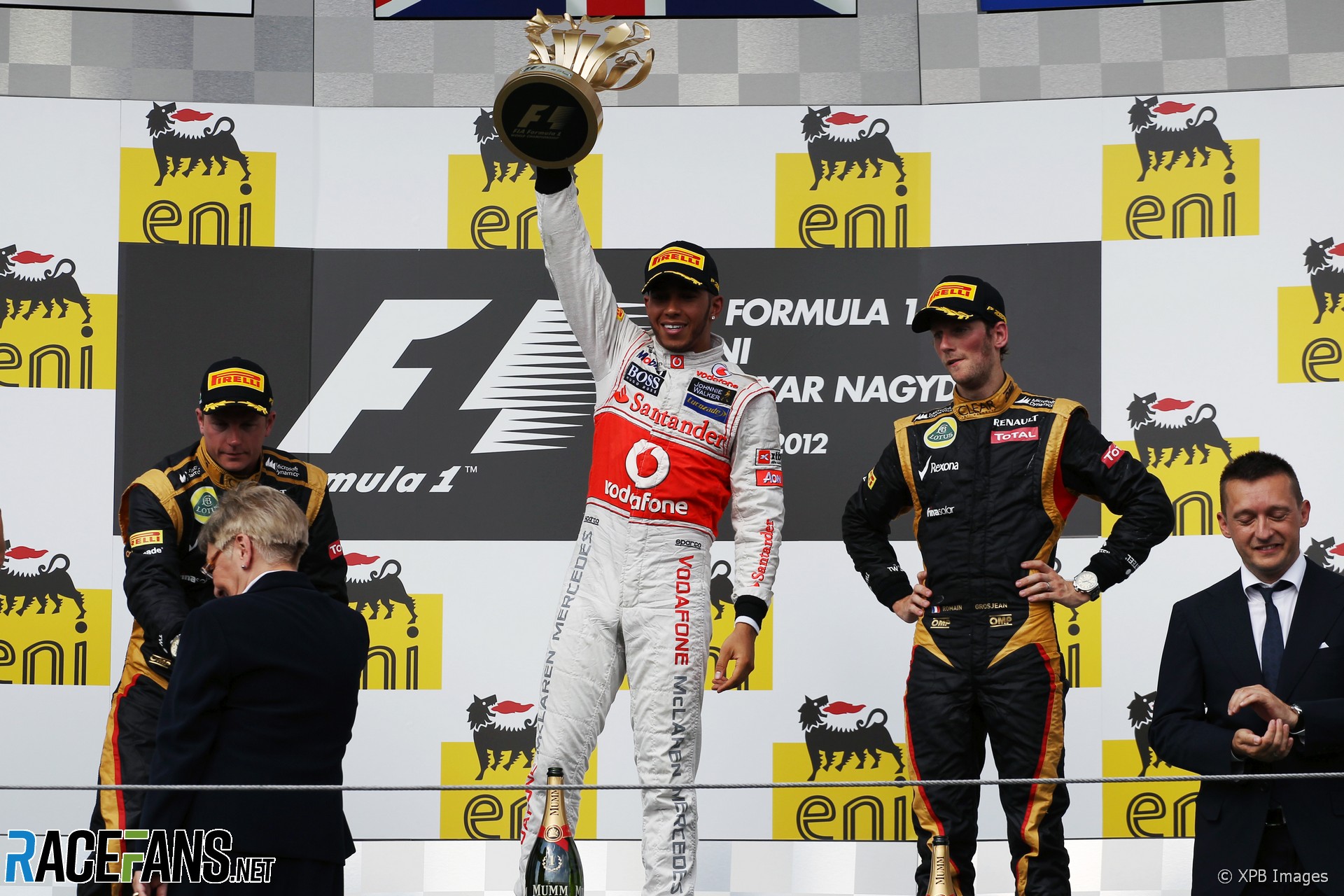 Lewis Hamilton bounced back from a trio of poor races with victory in the Hungarian Grand Prix.

He resisted pressure from both Lotus drivers – first Romain Grosjean, then Kimi Raikkonen, the latter crossing the finish line just one second behind the McLaren.

The first attempt at starting the race was abandoned for reasons that remain unclear.

The drivers were sent around for another formation lap but Michael Schumacher had already switched his engine off to preserve it – a mistake which consigned him to the back of the grid for the restart. The race distance was correspondingly cut from 70 laps to 69.

At the second time of asking Hamilton got away cleanly and quickly – too quickly for the first corner, where he ran a little wide, losing some of his instant advantage.

Sebastian Vettel had a run at Grosjean at the first corner but the Lotus driver took care to close him down. That allowed Jenson Button to take advantage, passing Vettel for third.

Bruno Senna had made a good start and was briefly up to sixth. But Fernando Alonso out-dragged him from the first corner and so did Mark Webber – who made excellent progress from 11th on the grid despite being the only driver in the top 20 on the medium compound tyres.

Alonso then nipped past Raikkonen, the Lotus driver having lost KERS charge at the start. Raikkonen had a similar problem in practice and the team reminded him what he needed to do to clear the problem, but he faced an opening stint stuck behind the Ferrari driver.

Hamilton drew away from Grosjean in the opening laps, pulling out a gap of just over two seconds. Behind them Button dropped back more quickly and was over five seconds adrift after a dozen laps.

Sebastian Vettel was close behind the McLaren with the Alonso-Raikkonen battle a further three seconds back, pursued by Webber.

Even at this early stage McLaren were contemplating switching Button to a three-stop strategy. They briefly discussed it on the radio before Button came in on the 15th lap.

Vettel responded two laps later and returned to the track behind Button. He was followed in by Alonso, but the Ferrari driver resumed behind the yet-to-stop Perez, losing some time behind the Sauber before out-accelerating him on the approach to turn four.

This played into Raikkonen’s hands, and Lotus could afford to both leave him out and lengthen his strategy, while being sure of gaining a place over Alonso.

This he did after the lead pair had made their first pit stops, Hamilton first on lap 18, followed by Grosjean the next time by.

Grosjean went after Hamilton in a big way at the beginning of his second stint, taking up to eight-tenths of a second out of the McLaren at times.

By lap 25 he was within DRS range of Hamilton but a scruffy final sector followed by a mistake at turn one cost him much of the ground he had gained. He got his head down and reduced the deficit to under a second once more.

But, like pretty much everyone else on the track, he found it impossible to get close enough even to have a look at the car in front, let alone make a move.

This was especially frustrating Vettel, stuck behind third-placed Button, who urged his team “you have to do something”. In the end it was not Red Bull who solved his problem, but McLaren.

They finally succumbed to the temptation to three-stop Button – “Plan B” as they called it – expecting that he would be able to pass cars more easily on fresher tyres. That proved not to be the case. Button almost immediately got stuck behind Senna, and was unable to pass the Williams.

Vettel came out of the pits ahead of Senna and Button. Grosjean appeared in front of him shortly afterwards as the Lotus driver made his final stop on lap 40. But Alonso was not ready to pit yet, and he played a decisive role at this point as Grosjean and Vettel were held up behind the Ferrari.

Raikkonen had taken over the lead and was pumping in rapid laps while the cars he had been behind were delayed by Alonso. After Alonso pitted his team could see he had a chance of coming out ahead of Grosjean.

While one side of the Lotus pitwall was urging Raikkonen to pull out quick sectors, the other was warning Grosjean about the threat ahead. Raikkonen came into the pits, and as he came out his race engineer advised him to deploy KERS on the way out of the pits, while Grosjean’s advised him Raikkonen was about to appear alongside.

They entered turn one side-by-side, Raikkonen on the inside. Grosjean briefly had his nose ahead and might have forced the issue, but he took to the run-off and ceded second place to Raikkonen.

That probably saved Lotus an awkward decision as Raikkonen, having pitted later, was much faster and began reeling in Hamilton. “Kimi will be catching us with fresher tyres but it’s hard to overtake here,” came the voice on his radio. “We can do this.”

That proved an accurate assessment. Even with slightly fresher tyres Raikkonen was unable to attack Hamilton. With ten laps to go, Raikkonen told his team his only hope was if Hamilton’s tyres went off.

Hamilton drew away from Raikkonen slightly towards the end of the race, the pair trading sector times until the chequered flag. Their final laps were almost identical, and after 69 laps of racing there was just a second between them.

The McLaren driver claimed his third victory at the Hungaroring and his second win of 2012.

Red Bull also opted for the three-stop approach for both their cars. Vettel was able to get in and out without losing fourth place but didn’t have enough time to catch Grosjean despite taking two seconds per lap out of the Lotus. He finished one second behind, needing that extra lap which was cut from the race distance to launch an attack for the final podium place.

If for Vettel it was a case of “nothing ventured, nothing gained”, Webber lost out badly with his final stop. He came in fifth, resumed eighth and stayed there. Like Button he found Senna’s Williams impossible to pass, his cause not helped by a problem with his differential.

Button had managed to leapfrog the Williams but was frustrated to finish sixth having run third.

Felipe Massa and Nico Rosberg completed the points-scorers with the Force India pair outside of the points. Pastor Maldonado was 13th after a drive-through penalty for pushing Paul di Resta wide at turn 12.

Alonso emerged from another race of damage limitation with an increased championship lead of 40 points. But it’s clear Ferrari are still up against it on raw pace.

The second half of the season will be about whether any of his championship rivals can start scoring points regularly enough to give him some competition.