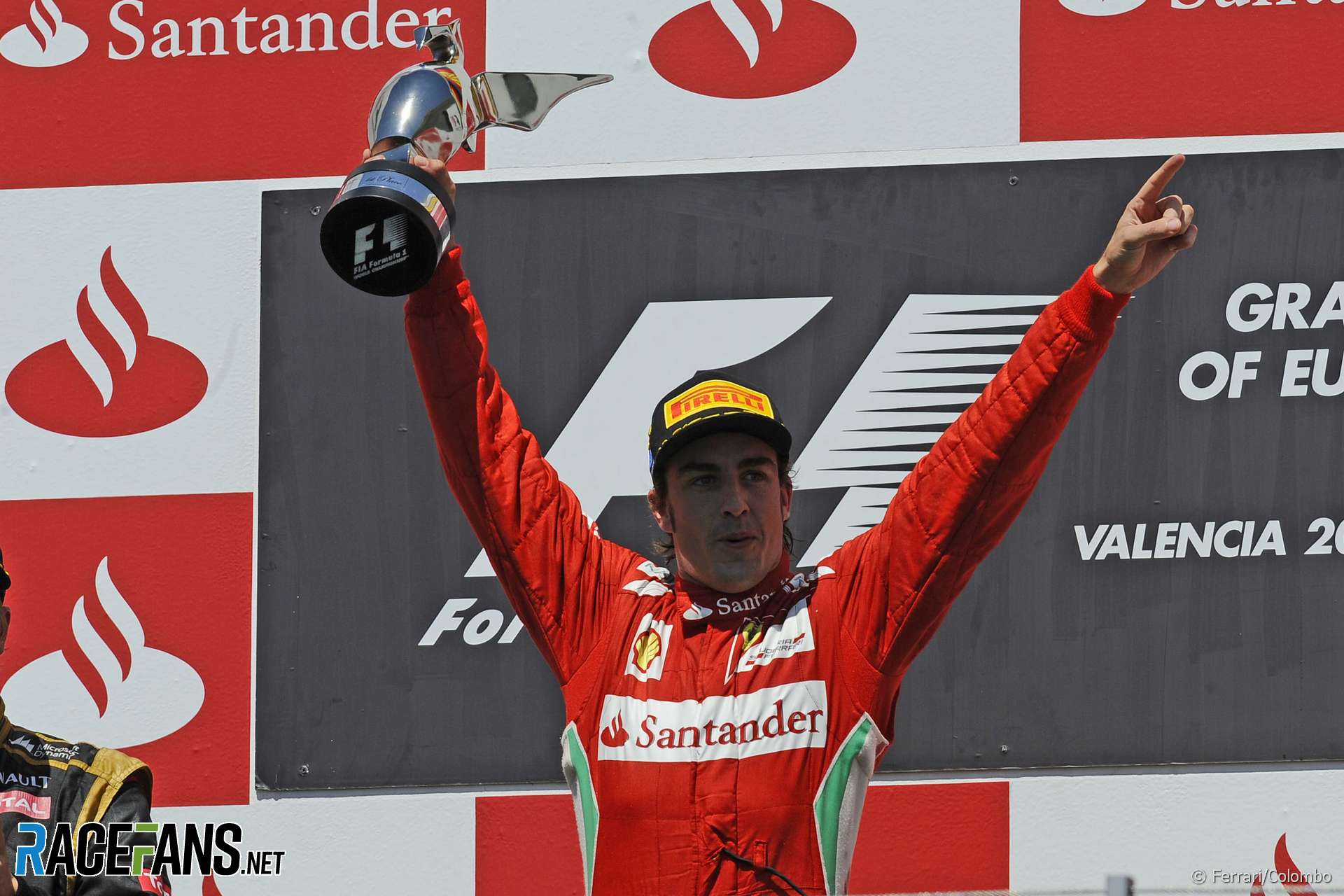 Fernando Alonso won the European Grand Prix after an excellent drive from 11th on the grid.

Early runaway leader Sebastian Vettel dropped out following a safety car period, by which time Alonso had battled his way through to second place.

Behind him Kimi Raikkonen took second ahead of Michael Schumacher – who finished on the podium for the first time since his comeback.

In the opening stages of the race it seemed no-one could catch Vettel. He converted pole position into the lead with ease, and by the end of the first lap was almost two seconds clear of Lewis Hamilton.

The next time by his lead had ballooned to four seconds – the updated Red Bull allowing him to reproduce the kind of dominance that was familiar from last year.

Hamilton came under intense pressure from Romain Grosjean, who had squeezed down the inside of Pastor Maldonado’s Williams at the first corner. Kamui Kobayashi also demoted Maldonado on the first lap, and the Williams driver fell into the clutches of Kimi Raikkonen.

They formed a train behind the McLaren while Vettel continued to extend his lead – by lap eight he was more than nine seconds to the good.

Grosjean, urged on by the Lotus pit wall, was exploring places to pass the McLaren. He found one on lap ten, going around the outside of turn 12 and to get the inside for turn 13.

But despite finding clear air Grosjean wasn’t able to make much of an impression on Vettel. By lap 12 the flying Red Bull was 11.9 seconds up the road.

Raikkonen had made an earlier effort to pass Maldonado and was pushed wide at turn 17 for his trouble. On lap 13 he drew along the outside of the Willams at turn 13 and made the move stick at the following corner for fifth.

Moments later Alonso also displaced the Williams. The Ferrari driver had picked up three places at the start before homing in on Maldonado.

Meanwhile the first pit stops had begun, led by Jenson Button and Sergio Perez on lap 11. Felipe Massa was in the next time by, Ferrari covering Button’s stop.

Hamilton came in on lap 14 and on the following lap his pursuers Raikkonen, Kobayashi, Maldonado and Hulkenberg all dived in. Raikkonen gained another place at the expense of Kobayashi.

Vettel and Grosjean came in together on lap 17 without any dramas.

Alonso emerged his pit stop crucially in front of Raikkonen. He then proceeded to pull of three vital passes that brought him within striking distance of the front.

He took Webber at turn two – braking far later and narrowly missing the rear of his rival. He took Senna later in the lap and then Schumacher – all while Raikkonen was still trying to find a way past Webber.

Raikkonen took the Red Bull, followed by Kobayashi, and then set about passing Senna. This was accomplished on the run to turn seven but as Senna regained the racing line Kobayashi tried to squeeze past but made contact with the Williams.

Kobayashi lost his front wing and Senna, pitched into a spin, picked up a puncture – both hobbled back to the pits. The stewards made the contentious decision to blame Senna for “causing a collision”, handing him a drive-through penalty.

A few laps later there was more drama. Jean-Eric Vergne was making a straightforward pass on Heikki Kovalainen when he inexplicably moved across on the Caterham. The damage ended Vergne’s race and gave Kovalainen a puncture and damaged wheel.

This had consequences for everyone else in the race as the safety car was summoned while the debris was recovered. Vettel’s 20 second lead was wiped out but he was able to keep his lead despite pitting a lap after Grosjean, Hamilton, Alonso and the rest.

Not for the first time this year, Hamilton’s pit stop did not go according to plan – a problem with the jack delayed him. “Shame about the stop that went wrong,” said mechanic Marc Cox on Twitter afterwards. “Totally out of our hands and we did our best.”

Hamilton’s delay promoted Alonso to third. Daniel Ricciardo did not stop and took fourth ahead of Raikkonen, with Hamilton down to sixth.

Under the revived rule for 2012 the lapped cars were waved past before the restart, keeping the safety car on-track for an extra two laps.

Vettel and Grosjean led the pack as the Safety Car returned to the pits – but both were doomed not to last much longer.

Grosjean took a look at Vettel at the final corner as the race resumed but Alonso took a wide line into the turn and emerged with a brilliant run on the Lotus. He drew around the outside of turn one and as Grosjean covered the inside line for turn two Alonso completed a superb opportunistic past.

His reward was doubled further around the lap when Vettel pulled up with an alternator failure on his RB8. A few laps later Grosjean succumbed to the same having been pressing Alonso for the lead.

Alonso now had a comfortable three-second margin over Hamilton and Raikkonen, who had demoted Ricciardo. Ferrari watched carefully for signs of the dreaded tyre degradation which cost him victory in Canada, but there was to be no repeat.

Hamilton, however, did hit tyre trouble, and with three laps to go Raikkonen was hounding him. Coming out of the turn 17 hairpin his traction was so poor Raikkonen simply out-accelerated him to take second.

Now Maldonado was within range and the DRS zone gave him an opportunity to pull alongside the McLaren.

Hamilton eased him wide at turn 12 but Maldonado swung back onto the track into the side of the McLaren, pitching Hamilton into the barrier.

The wounded Williams now had a shaky fold on third place but fell victim to a string of cars led, surprisingly, by Michael Schumacher.

The Mercedes driver had ripped through the field, followed by Mark Webber, after the pair made late second pit stops.

Alonso celebrated his win by parking his Ferrari and waving a Spanish flag in front of his fans. It’s his second F1 victory in Spain, along with his 2006 trumph at the Circuit de Catalunya.

Raikkonen and Schumacher made it three world champions on the podium with a combined ten titles between them.

Nico Rosberg appeared between the pair of them, rocketing from tenth to sixth in the final laps after his late second stop.

Button was a lowly eighth for McLaren followed by Sergio Perez and Maldonado – who took two minutes to complete the final lap and nearly lost the last points place to his team mate.

Ricciardo had looked good for points until he tripped over Vitaly Petrov’s Caterham, almost flipping his Toro Rosso. Petrov ran tenth and finished 12th, in front of his team mate despite making four pit stops – twice as many as Kovalainen.

The sole Marussia of Charles Pic came in 15th – Timo Glock did not start the race due to illness, having also missed qualifying.

Felipe Massa was a lapped 16th following a collision with Kobayashi. The HRTs were still running at the end and were classified along with the unhappy Hamilton.

Schumacher back on the podium

Alonso’s remarkable win will rank along with the best of his career – much as his earlier victory in Malaysia earlier this year. It gives him a 20-point lead in the drivers’ standings, boosted by Vettel and Hamilton’s failure to score.

But if anyone on the podium was almost as happy, it was surely Schumacher, who returned to a Formula 1 podium for the first time in six years.