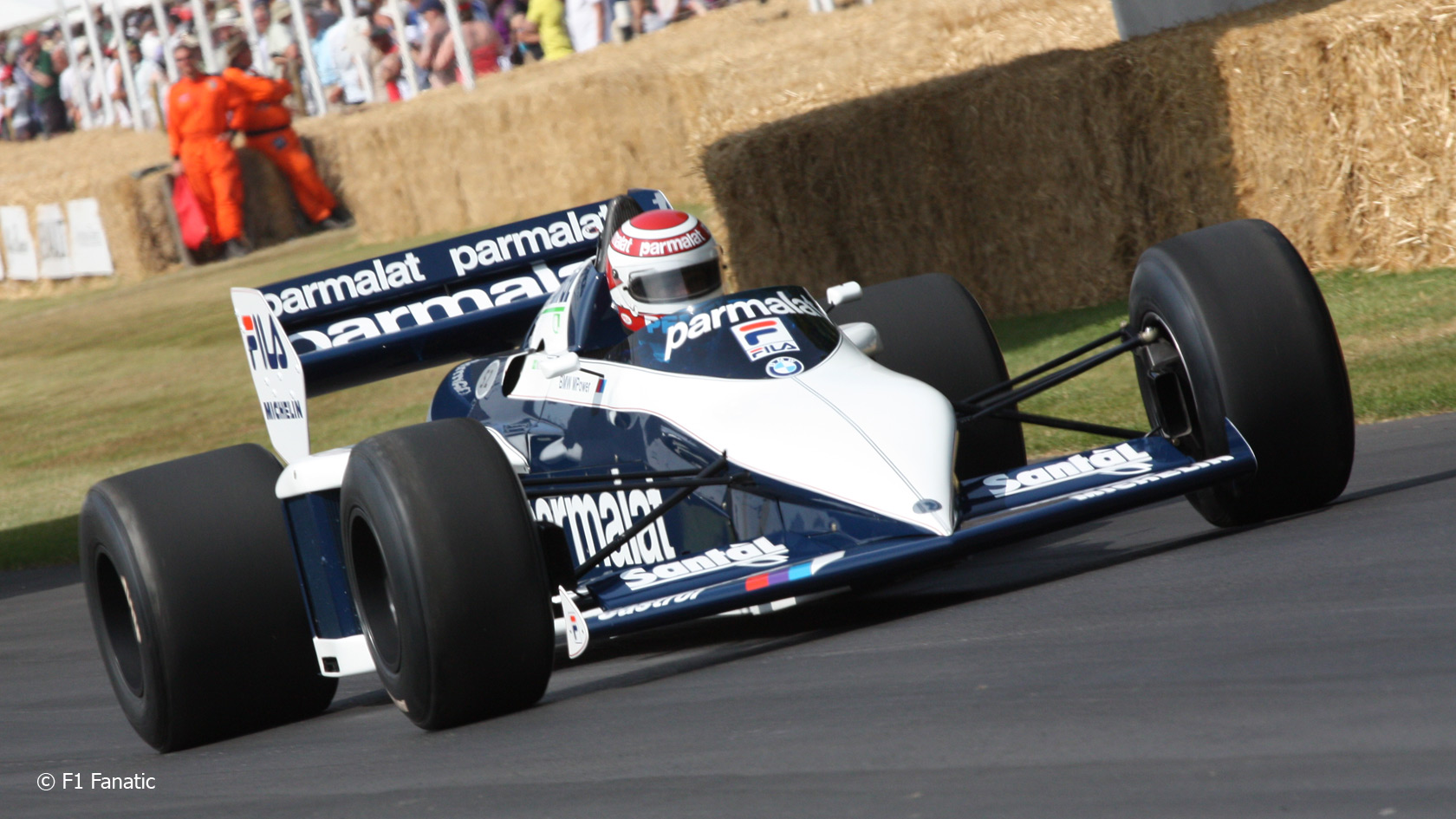 The Brabham BT52 was the first turbocharged car of F1’s last ‘turbo era’ to carry a driver to the world championship.

Nelson Piquet clinched the title in the Gordon Murray-designed car with its 1.5-litre four-cylinder BMW power plant in 1983. Now 30 years later Piquet has been reunited with the car at the Goodwood Festival of Speed.

It was Piquet’s second world championship triumph, adding to his 1981 victory in a Cosworth-powered Brabham. The following year Piquet spearheaded Brabham’s development work with the often troublesome Munich engine, suffering the indignity of failing to qualify for that year’s Detroit Grand Prix.

But the car came good and Piquet gave the Brabham-BMW alliance its first victory in Canada. A championship campaign was clearly on the cards for 1983.

Brabham intended to start the season with Murray’s new design, the BT51. But late in 1982 – October 14th – the FIA outlawed ‘ground effect’ aerodynamics, requiring cars to have flat bottoms. Murray removed the side skirts from the BT51 to see how it handled without the prodigous increase in downforce created by the ground effect. Not well. He went back to his drawing board.

For his new car Murray was able to carry over another of the design features of the binned BT51, one which was designed to exploit an innovation Brabham had experimented with in 1982: in-race refuelling. The high fuel consumption of the turbo-powered cars was one of their major drawbacks. The possiblity of teams using refuelling stops – which had been seen in Formula One before – was mooted in the motor racing press and eventually Brabham team owner Bernie Ecclestone committed to the plan.

At the Austrian Grand Prix the team duly performed the first refuelling pit stop of the modern. era, for Riccardo Patrese. Unfortunately for the driver his engine seized after returning to the track, sending him spinning into retirement.

While their 1982 car had sufficient capacity to make it through a race without stopping for fuel, Murray comitted to building a car with a smaller tank for 1983. The reduced dimensions of the rear of the car resulted in the BT52’s distinctive dart shape, a clear departure from its predecessors.

Brabham had kept their Cosworth-powered cars on hand during 1982 but for the new season they would exclusively use BMW’s turbos. The engine blocks, taken from BMW’s 3 Series and left outside to age and strengthen for several months, generated more power at peak output than BMW could measure. Their dynamometer only went up to 1,200bhp – they estimated anything up to 300bhp on top of that was being produced.

Murray took the unusual step of designing the BT52 with fixed wings, leaving the driver with one fewer variable to work with. The vast power of the engine negated the need for a low-downforce configuration.

When Brabham arrived in Brazil for the first race of the season they were surprised to discover not all of their rivals were prepared for in-race refuelling and none had been as aggressive in slimming down the rear of their cars. Piquet began his championship campaign with a home win.

After that Renault, who had reintroduced turbocharging to F1 in 1977, took the initiative. Alain Prost led Piquet home in round three at Paul Ricard. This began a series of four consecutive podium finishes which propelled Piquet ahead of Prost in the drivers’ championship. Engine and throttle problems caused retirements for Piquet. Through the middle part of the season Renault continued to hold the upper hand: Piquet was second to Prost again at Silverstone.

But later in the year the momentum swung to Brabham, who continued to extract more power from their engine while – crucially – getting on top of their reliability problems. Piquet led Prost at Zandvoort until the Renault driver made an uncharacteristically risky overtaking move and punted the Brabham driver off – the Renault also failed a few corners later.

Piquet hit back with consecutive wins at Monza and Brands Hatch. The contest came down to the final race at Kyalami – the race had been planned as the season opener before the 11th-hour rules change lead to it being postponed until the end of the year.

Prost led Piquet by two points with Ferrari’s Rene Arnoux mathematically in contention for the title as well. In the race Piquet blasted into the lead and Prost dropped out after 35 laps when his turbo failed.

Having been told of Prost’s plight, Piquet let Patrese through to win and even waved Andrea de Ceasris through into second, third being more than sufficient to secure his second championship victory.

This was the last championship success for a Brabham driver. The team placed only third in the constructors’ championship – Patrese’s only other points score all year was four for third in Germany. He crashed out while leading at home in Imola.

The team’s form dropped off sharply after then: just three more wins followed over the next two seasons. Ecclestone pulled the team out after 1987 and subsequently sold them. The Brabham name disappeared from F1 less than ten years after the BT52’s success.

Nelson Piquet in the Brabham BT52