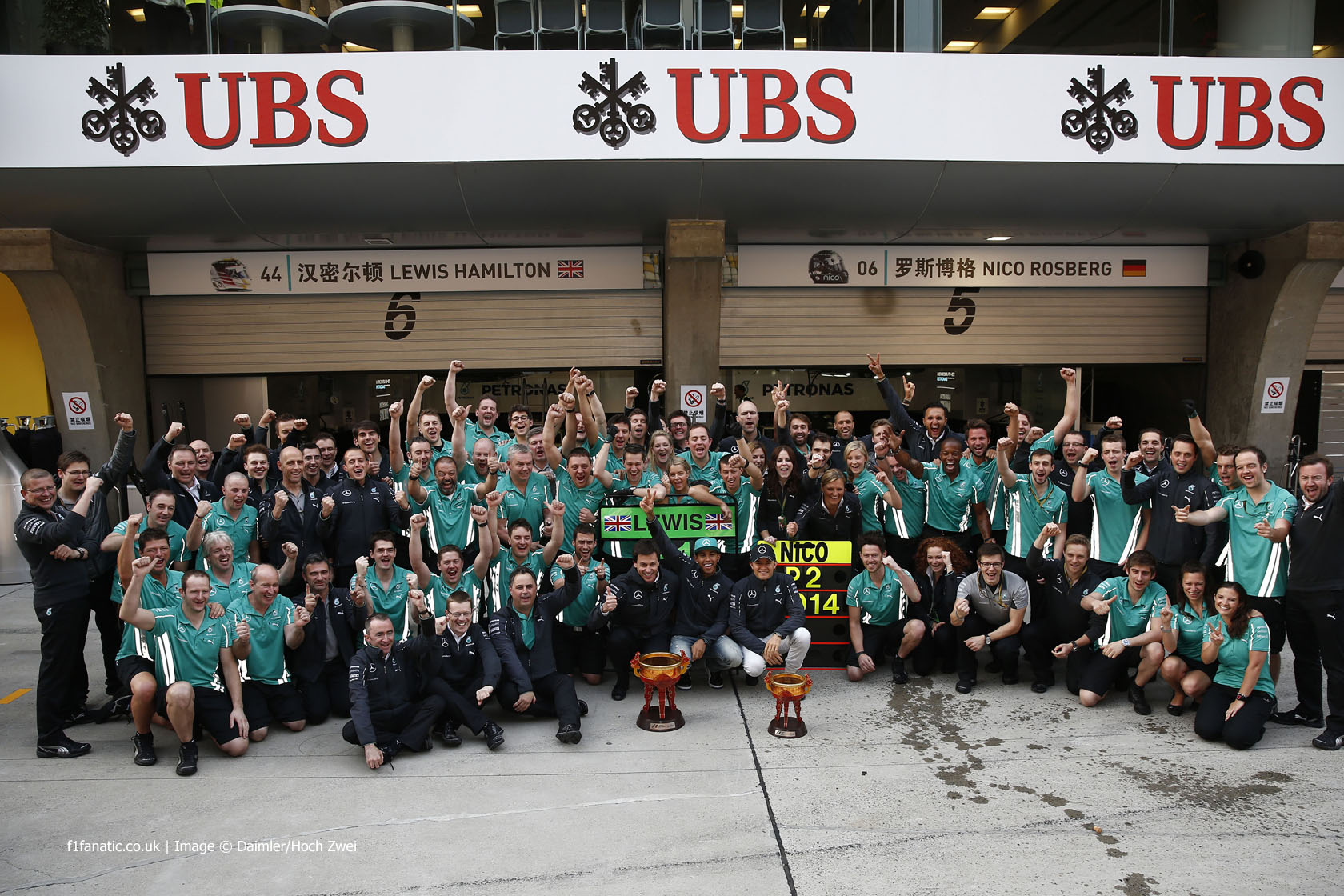 The weekend’s best weather awaited Formula One on Sunday. Lewis Hamilton took a dominant win, while Ferrari got their first podium finish of 2014.

Pit stop practice for the boys in prep for the race. #ChineseGP pic.twitter.com/me9dBbhahv

Happy easter everyone. Chocolate and raceday. What more could you want 😃 — Daniel Ricciardo (@danielricciardo) April 20, 2014

Good morning from Shanghai. The rain has gone – looks like it’s going to be a dry race today

Interesting to note all the Ferrari-powered cars have had spark plug changes overnight. #F1

The fourth race of the season got underway with two tangles in the first metres.

Another rocketship start from Massa, who tangles with Alonso! #F1

Massa being squeezed at the start. #F1 pic.twitter.com/6AK5cPoSU8

Problems in the pits for Massa put him back on track out of position at the back of the pack — WILLIAMS RACING (@WilliamsRacing) April 20, 2014

After the first round of stops, Nico gains a position and Checo two – great job by the crew! #FeelTheForce — Sahara Force India (@clubforce) April 20, 2014

Gap to @alo_oficial down to 1.3 seconds for @nico_rosberg.. the beast is hunting down the prancing horse #TheBeastGoesEast

Awesome crowd here which is what we love to see! #ChineseGP pic.twitter.com/BV8NWWxMZL — WILLIAMS RACING (@WilliamsRacing) April 20, 2014

A promising weekend for Romain Grosjean and Lotus came to a disappointing end with a gearbox failure.

Hello you, we weren’t expecting you home so early. #F1 #ChineseGP pic.twitter.com/BzmsEYA5Jj

His teammate Pastor Maldonado fought Esteban Gutierrez, with a better outcome than a fortnight ago.

Maldonado vs Gutierrez round two – this time everyone stays the right way up. #F1 pic.twitter.com/XeeRcckxm2 — F1 Fanatic (@f1fanatic_co_uk) April 20, 2014

More good work from Kamui who catches and passes CHI quickly, now setting off after BIA

Bottas is also being asked for his fuel figures and unlike Rosberg his data is not appearing on the readout on the world feed. #F1 — F1 Fanatic (@f1fanatic_co_uk) April 20, 2014

Superb pacing by Alonso. Leaving enough reserve for a string of personal best laps to keep ahead of Ricciardo.

Six laps left. @kamui_kobayashi has cut the gap to BIA to 2.4 seconds and is lining him up….

Lap 55/56 | Jules is doing an epic job keeping KOB behind him to the flag.

Nico holds on to P6 despite a late surge by BOT, Sergio crosses the line in P9 for our 3rd double-point finish of the season! #FeelTheForce — Sahara Force India (@clubforce) April 20, 2014

Hamilton may have three wins to Rosberg’s one, but it’s the latter who leads the championship.

Kimi Raikkonen finished a disappointing weekend in eight position, 53 seconds behind his teammate.

Horner plays down Newey being at Silverstone (with WEB) for WEC; saying he was in race command for GP and doing development. #F1

Nice touch from @alo_oficial. Dedicated podium to Stefano. Said he hopes to give his former boss lots of joy from comfort of his own home. — Will Buxton (@willbuxton) April 20, 2014

Great to see Ron Meadows on the China podium accepting the team trophy. He’s been there all the way, through BAR Honda, Brawn, Mercedes .

Howdy. Not a bad day had good pace so just gonna keep chipping away at it. Next stop Barcelona! 🇪🇸

Disappointing weekend. But we need to learn from this and work hard to improve. Then we will come back stronger in Europe! #KeepPushing #ME9