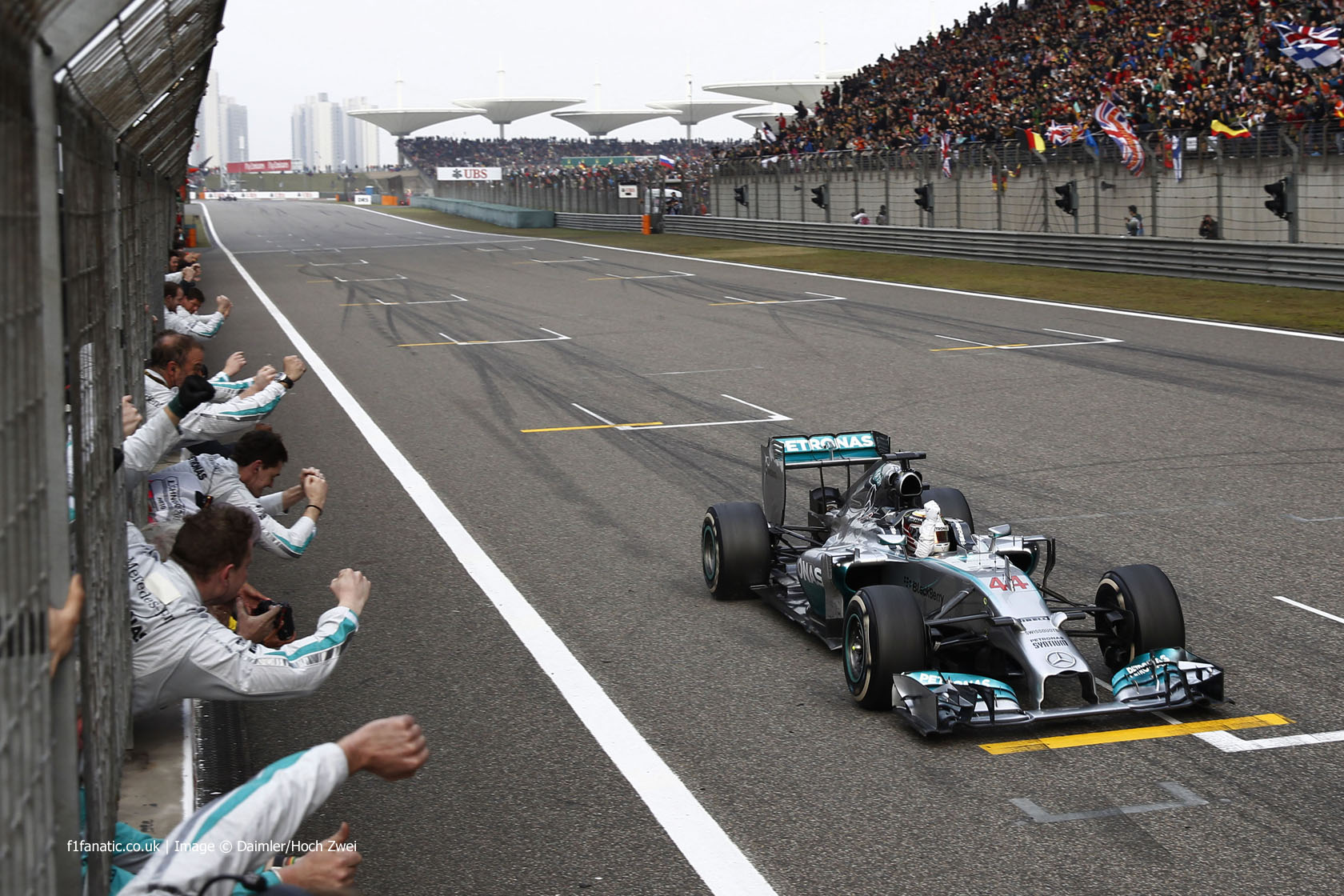 Lewis Hamilton took the 25th victory of his Formula One career in the Chinese Grand Prix – and he hasn’t had many wins that were more straightforward.

That might have seemed unlikely two days earlier. Hamilton’s position at the top of the time sheets on Friday flattered to deceive – he was distinctly unhappy with the balance of his Mercedes.

Events swung his way on Saturday during a wet qualifying session – remarkably, the third in the last four races. His championship-leading team mate Nico Rosberg was not comfortable with his brakes and compounded his troubles by mis-reading his dash read out during his final lap.

Under the mistaken impression he was well off the pace when he was actually on course to improve his time, Rosberg spun at the last corner, leaving him only fourth on the grid. Mercedes’ superiority being what it is, even Hamilton had to admit that made him the clear pre-race favourite.

Rosberg slips back at start

Hamilton’s position looked even stronger a few seconds after the red lights went out and Rosberg made a conspicuously poor start.

This was down to sheer bad luck. Rosberg had done his homework, scrutinised the data from his practice starts, and said his last one was “perfect”. But a loss of telemetry as he prepared to take the start for real left him unable to reap the benefit of his labours.

“My engineers couldn’t see what was going on in my car and therefore they couldn’t set up my clutch for the start,” he said. “The clutch was completely on the wrong place, which is why I had a really bad start.”

Then as his rivals swept either side of him at the first corner Rosberg was clipped Valtteri Bottas. “I thought that was it,” said the Mercedes driver.

“Luckily my car wasn’t damaged and in the following laps the pace in the car seemed good, which meant I was able to climb some positions.”

As they rounded the long, looping right-handed turn one Rosberg had fallen to seventh with the two Red Bulls plus Fernando Alonso, Felipe Massa and Nico Hulkenberg separating him from his team mate. He picked off the Force India before lap one was done and by lap four he had demoted Massa for fifth. The other Williams driver had also tangled with a rival at the start.

Much as in Bahrain, Massa’s getaway was phenomenal, but he arrived at the first corner hemmed in by slower rivals. He attempted to insert his car between Daniel Ricciardo and Alonso, which almost ended in disaster.

The Ferrari driver didn’t realise Massa was there and the pair touched wheels, the Williams briefly jumping into the air. Had Massa lost control in this instant the consequences might have been horrendous.

Massa kept his car pointing forwards but lost momentum and several of the places he had gained. Alonso, however, was not put off his stride and continued in third behind Vettel.

The Red Bull driver was soon in trouble with his tyres. Having initially lost ground to Hamilton at a rate of half a second per lap, from lap six that deficit rose sharply, exceeding one-and-a-half seconds at times.

A four-car train of Vettel, Alonso, Ricciardo and Rosberg formed, each not wanting to get too close to their rivals and risk suffering the loss of downforce that could aggravate their tyre graining on the soft compound rubber.

It presented an opportunity to Ferrari which they seized on lap ten, bringing Alonso in on lap ten. Red Bull reacted with Vettel on the next lap but despite his team getting him out of the pit lane fractionally faster than Alonso his rival was able to use the performance of his new tyre to jump ahead.

Ricciardo, who had run an impressively long stint on the soft tyres during practice on Friday, hung on until lap 15 before coming in. Rosberg pitted two laps before that and easily jumped the Red Bull driver, whose pit stop was not up to Red Bull’s usual standard. Rosberg then demoted Vettel with little difficulty on lap 21, the Red Bull comprehensively outgunned by the Mercedes on Shanghai’s long straight.

Having switched to medium tyres Vettel got further into his second stint before his lap times began to rise. And just as before it presented a problem for Red Bull, as it was costing his team mate time as well.

In a repeat of what happened in Bahrain, Vettel was ordered to let his team mate through. On that occasion they were on distinctly different strategies and Vettel wasted little time in complying. This time he saw things differently.

“Which tyre is he on?” Vettel enquired of race engineer Guillaume Rocquelin. “[Mediums], but he stopped later than you,” Rocquelin replied.

Ricciardo had changed tyres four laps later than Vettel so we has certainly the more realistic prospect for the team in terms of achieving a two-stop strategy. Given Vettel’s loss of time, the prospect of switching him to a three-stopper was a realistic one. Now Vettel was told that was the team’s plan:

“Sebastian, Daniel is on a two-stop,” Vettel was told. “Think about boxing,” he replied. But in the event he was able to stay out for a further ten laps after he and Ricciardo changed places.

Vettel later claimed he let Ricciardo by voluntarily once this had been explained to him. If so, he had a sudden change of heart between the turn 14 hairpin, where he defended the inside line from Ricciardo at the end of lap 25, and two corners later, where Ricciardo got by.

It was an ambiguous move by Vettel, who ran slightly wide at the first corner. That allowed Ricciardo through – but was it because Vettel had permitted it? Had it not been for the handful of laps Ricciardo spent behind Vettel it’s possible he would have been able to catch Alonso and put him under pressure.

But there is no way the Red Bull would have been able to motor past the Ferrari with the same ease Rosberg did on lap 42. Even without DRS that move would have been a slam dunk, Rosberg enjoying a 15kph straight-line speed advantage.

Ricicardo’s car was no faster through the speed trap than Alonso’s. But as he ended the race two-tenths of a second away from getting to use DRS against the Ferrari, it would have been understandable for him to feel his team mate had cost him a chance of finishing on the podium.

In a bizarre twist, Caterham’s Kamui Kobayashi did have someone to blame for losing the 17th place he took from Jules Bianchi on the last lap. The culprit was the person who waved the chequered flag at Hamilton a lap early, as under the rules if that happens the race result is declared based on the standings at the end of the previous lap.

As far as Hamilton was concerned it would have made no difference if the chequer had come out at the end of lap one. He never looked in danger of losing the lead, Rosberg having taken most of the race to get back to the second place he should have started from.

Sixth-placed Hulkenberg was beginning to come under pressure from Bottas as the race ended. The other Williams dropped out of contention after a shambolic first pit stop.

Kimi Raikkonen’s miserable weekend continued with a quiet run to eighth, the Ferrari driver having to back off in the final laps as the team were concerned about his rate of fuel consumption.

Behind him Sergio Perez recovered from a poor qualifying session to take points for ninth place. Rookie Daniil Kvyat was 24 seconds behind and not on the lead lap but nonetheless finished in the top ten for the third time in four races.

McLaren endured a continuation of a weekend when both drivers had complained of a shortage of downforce and consequent lack of grip. Jenson Button was 11th, Kevin Magnussen 13th after once again damaging his front wing at the start of the race.

Lotus got one car home with Pastor Maldonado but Romain Grosjean’s car dropped out mid-race after he lost fourth gear, the beginning of a more serious failure within the gearbox. He had been running inside the points.

With his third win at the Shanghai International Circuit, Hamilton has now scored more wins at the track than any other driver. It’s some recompense for his infamous retirement from his first race at the track in the pit lane gravel trap.

That was the beginning of the end of his 2007 championship bid. Seven years on, a second world title is looking an ever more distinct possibility, even if his team mate retains a slender four-point advantage in the standings.

But Rosberg will know he needs to start beating his team mate on days when both of them finish in order to stay ahead of Hamilton.