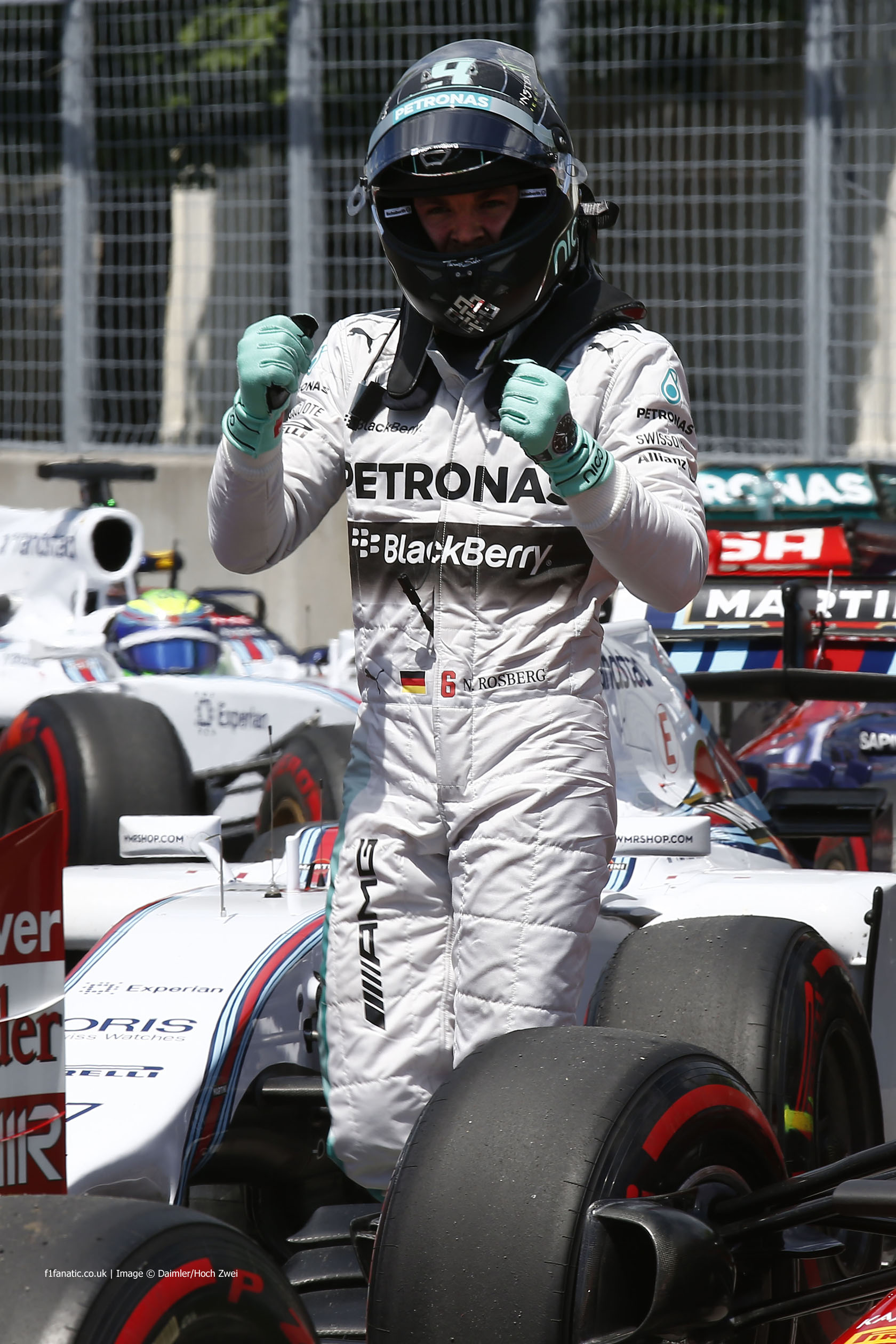 Good morning from Montreal. Stunning view of the St. Lawrence – looks like we’re in for a beaut of a day. #CanadianGP pic.twitter.com/U4qfS8FdMe

Joyce: “Don’t know why Rosberg sat at the end of the pit lane for so long.” Hulkenberg: “He did a standing bite point and waited quite long”

A wave to the crowd from @alo_oficial at the hairpin – but unlike @Mansell_Nigel his engine keeps going… #F1 pic.twitter.com/5ieRcy6fHz

Esteban Gutierrez did not take part in qualifying as he was in need of a new chassis after crashing in the final practice session.

The damage on Gutierrez’s Sauber is clear to see – will he need a new gearbox? #F1 pic.twitter.com/tsC0nGdoNt

Kevin Magnussen also had a spin, but managed to avoid hitting anything.

#F1 All 6 Mercedes powered cars allowed to use a new quali engine mode to release a few extra horsepower. Don't know how much though.

A new deal for the Circuit Gilles Villeneuve to stay on the calendar was announced.

The Canadian Grand Prix, the country’s largest annual sporting event, will be held in Montreal for the next 10 years. Big Winner?: Formula 1

So what if it takes 45 minutes to walk to the car after we finish work here. We can always find another job if we hate it that much

Felipe Massa got ready for what would turn out to be his best grid position of the season. Plenty of drivers were in trouble in Q1.

Felipe is in the car as #Q1 is about to go green! #CanadianGP pic.twitter.com/pWUlTQf27n

Raikkonen did well to keep his Ferrari out of the Wall of Champions. #F1 pic.twitter.com/EOgt6Bckc7

Perez made it to the apex at turn eight, unfortunately he was perpendicular to the racing line. #F1 pic.twitter.com/L3JhLUNuNT

Red flag in Canada as Ericsson crashes into the wall. pic.twitter.com/y6t0WT8ga4

Close enough to the wall at turn four there for Raikkonen? I think so… #F1 pic.twitter.com/ZHGqbWGeiC

Wow! Williams boys are flying. Lost P1/P2 to the Mercs at the end of Q2 but still v impressive

#BOTTAS is first on track for Q3 pic.twitter.com/AwXtXW64dd

Can’t stress enough – absolutely sensational pole from Nico Rosberg. This is supposed to be Lewis Hamilton’s circuit. Not anymore.

Who saw that one coming then? Not me. Sterling job from Rosberg. Tomorrow’s race has all the ingredients to be very tasty.

Well, digesting all of that #CanadianGP quali. Strikes me that Nico has struck a huge mental blow in his duel with Lewis

Yikes! Vettel and Kobash have both now used 5 Control Electronics units… with the next change they’ll get a grid penalty.

Rob Smedley not exactly ecstatic with Williams 4th and 5th on the grid. “I thought we had the legs to be third today. And we didn’t do it.”

Happy with today. P18 and room for improvement if we missed the red Q2 was possible. Car is developing nicely! 👍😃 pic.twitter.com/gmBdmQeEKZ

There's an ex-Gilles Villeneuve Ferrari 312T5 in the historics race being driven by a guy wearing Gilles' helmet. I just jumped up and down!

Canada time difference means that when you do get 5 mins to call home everyone is asleep :( #missinghome @LeeJAdams @ParsleyMuss @TheBasMuss

Sebastain Vettel is watching the Historic F1 Cars in the pit lane. He’s just indicated to his friend that the noise have him goosebumps. #F1

Good Qualifying from us today @WilliamsRacing ! Starting P4 for the race tomorrow – looking forward to it! http://t.co/ooU8nJG9uC #77

Really close session for us in qualy. Couldn’t get it all together but gonna have another crack at it tomorrow. Gonna be an exciting race 😉

A second day comes to its end. Thank you fans for being so enthusiastic today. Looking forward to see you tomorrow. pic.twitter.com/Yf8qjCkR00