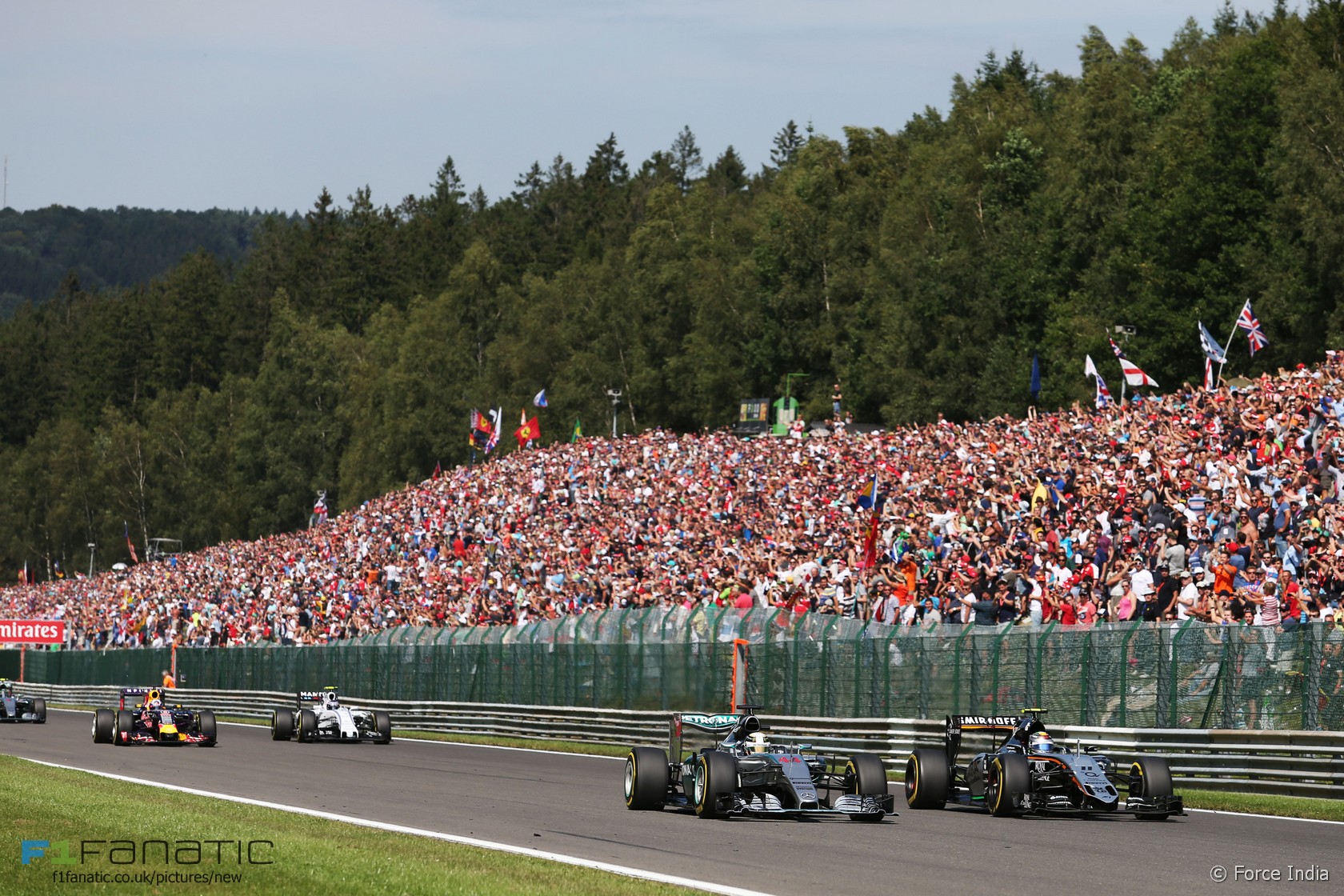 Sergio Perez had his Force India in the lead for a few seconds at Spa-Francorchamps. Although he slipped back to fifth at the flag, that is still Force India’s best result of the season so far.

Perez got the jump on Valtteri Bottas and Nico Rosberg at the start, but Lewis Hamilton resisted his attempt to take the lead as they sprinted towards Les Combes for the first time.

Hamilton quickly left the Force India behind – by lap six the gap was almost five seconds. Meanwhile Perez was coming under pressure from Ricciardo behind, and when the Red Bull driver pitted after half-a-dozen laps Force India responded.

They weren’t quick enough to stop Ricciardo getting ahead. But Perez took another set of softs while Ricciardo opted for mediums, and within three laps the Mercedes-powered cars straight-line speed and grip advantage got him back ahead.

Nico Rosberg’s Mercedes easily jumped him at this time. Perez’s pace on his second set of soft tyres also wasn’t enough to keep Grosjean behind: the Lotus driver quickly caught and passed him.

Perez had lost another place to Sebastian Vettel’s one-stopping Ferrari, but his late tyre failure promoted Perez one place. However by then he’d also been passed by Daniil Kvyat, who had switched to fresher tyres.

“Fifth place and ten points is a good result,” said Perez, “but we just lacked the pace to really fight for the podium today”.

“My start was very strong and I was close to taking the lead on lap one when I was alongside Lewis after Eau Rouge. I settled into a good rhythm, but we had very high degradation on the soft tyres in the first two stints.”

“It was a bit better on the medium, although we struggled in the middle sector with our low downforce set-up and that hurt my pace. We were racing some quick cars and it was hard to fight off Grosjean and Kvyat, so it’s clear we need to analyse our performance and see where we can improve.”

NB. Carlos Sainz Jnr’s data not shown due to his first lap delay.

9 comments on “Perez slips to fifth after strong start”