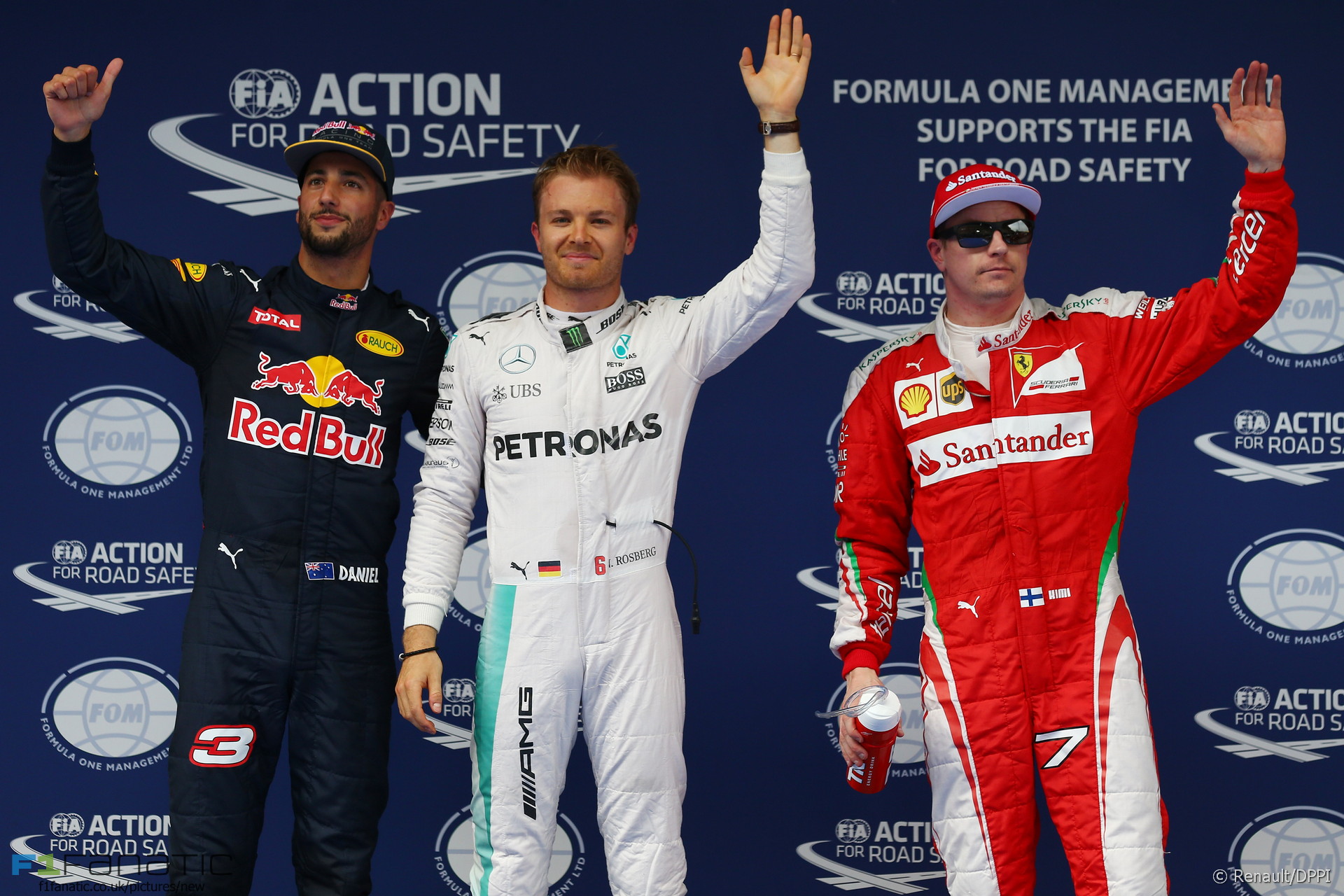 Championship leader Nico Rosberg will start from pole in China, while team mate Lewis Hamilton will start dead last on the grid after an engine problem meant he was unable to set a time in qualifying.

Rosberg will be joined on the front row by Daniel Ricciardo’s Red Bull after mistakes from both Ferrari drivers left Kimi Raikkonen and Sebastian Vettel in third and fourth, respectively.

A welcome return to the 2015 qualifying system following the shambolic introduction of elimination qualifying provided plenty of action in the first of three knockout sessions.

Following a very wet final practice, the rain subsided over the two hours before the start of Q1, leaving the track only slightly damp as qualifying began.

Lewis Hamilton and Nico Rosberg immediately ventured out on Intermediate tyres, but it soon became clear that the track was already dry enough to consider slick tyres, except for a handful of damp stretches along the start/finish straight.

Hamilton reported that his Mercedes felt down on power during his first lap and soon pitted for a switch on to dry compound tyres and for the team to investigate the issue.

Manor had opted for supersoft tyres on both their cars, but Pascal Werhlein lost control of his car on the damp bump on the finish line at the start of his first flying lap and speared across the track, striking the left-hand barrier and putting him out of the session on the spot.

An unusually lengthy red flag stoppage followed as track workers attempted to dry up the wet stretches across the start/finish straight, with the session eventually restarting around 20 minutes later.

There was no rush to set times once the session resumed, with most teams opting to stay in until five minutes left. The Ferraris of Sebastian Vettel and Kimi Raikkonen set the benchmark, with Vettel going fastest with a 1’37.001.

Hamilton left the pits for a second run, but it was immediately clear that there was a significant issue with the hybrid system of the world champion’s Mercedes and the team instantly called Hamilton back to the pits.

As time ticked down and no time set, it soon became clear that Hamilton would not be able to make it back out in time and would be out of qualifying in the very first session – his five-place grid penalty dooming him to a start from the very back of the grid.

With the back row of the grid decided, it became a battle between Renault and Sauber to decide who would avoid elimination.

Felipe Nasr set a quick time to take him out of the danger zone, before Kevin Magnussen went P16, pushing Esteban Gutierrez out of Q2.

It all came down to Marcus Ericsson’s final lap, with the Swede posting the 13th quickest time as the chequered flag flew to put him through into the second session and knocking out both of the Renaults.

The second session of qualifying began with no more threat of rain expected. Nico Rosberg set the early pace with a 1’36.240 as teams once again took their time in venturing out onto the circuit.

The Ferraris made their runs with five minutes remaining both with supersoft tyres on their cars. Raikkonen usurped Rosberg at the top of the times with a 1’36.118, followed by Vettel who was less than a tenth off his team mate.

As the second session entered its final minutes, every car was on track, minus the Ferraris and Rosberg’s Mercedes.

But with a minute and a half remaining and drivers limbering up for a final flying lap, the session was brought to a sudden stop when Nico Hulkenberg’s left-front wheel separated from his Force India, bringing out another red flag.

With no time left for drivers to begin a final flying lap once the session resumed, the order was effectively set. This meant that Felipe Massa, Fernando Alonso and Jenson Button were out with no opportunity to improve their times, with Alonso’s frustration audible over team radio.

Romain Grosjean was also eliminated in the sole remaining Haas, while Ericsson and Nasr rounded out the session in 15th and 16th, respectively. Ironically, Hulkenberg benefited from his own red flag stoppage by securing tenth position, but will be under investigation for an unsafe pit release and certainly penalised.

Perhaps crucially, Rosberg’s time was set on the soft compound tyre, meaning he will start tomorrow’s race on this set, rather than on the unfavoured supersoft.

The final shoot-out for pole looked like a straight fight between the Ferraris and Rosberg’s Mercedes. Rosberg was the first to set a time, posting a 1’36.111 on supersoft tyres.

Ferrari responded immediately, sending Raikkonen out on supersoft tyres also. The Finn put in a good lap to pip the Mercedes to provisional pole by one tenth with a 1’35.972. Sebastian Vettel opted to stay in the pits, pinning his hopes on a single flying lap.

For the first time in 2016, we had a final rush for pole in the closing moments of qualifying. Rosberg was the first across the line, taking provisional pole right back from Ferrari by a half a second with a 1’35.402.

Daniel Ricciardo surprised by jumping up to second place on his final effort, leaving the Ferrari duo with the opportunity to challenge for pole on their final laps.

Unfortunately for the Scuderia, mistakes under braking for the hairpin for both Raikkonen and Vettel meant that they were unable to beat Ricciardo’s Red Bull, let alone challenge Rosberg for pole. Instead, the team will have to settle for a second row lockout.

Valtteri Bottas will start fifth in the Williams, with Daniil Kvyat having by far his best qualifying result of the season so far in sixth. Both Force Indias will start from the top ten – subject to Hulkenberg’s inevitable penalty – as will both Toro Rossos, with Carlos Sainz Jr ahead of Max Verstappen.

99 comments on “Rosberg on pole, Hamilton starts last in China”