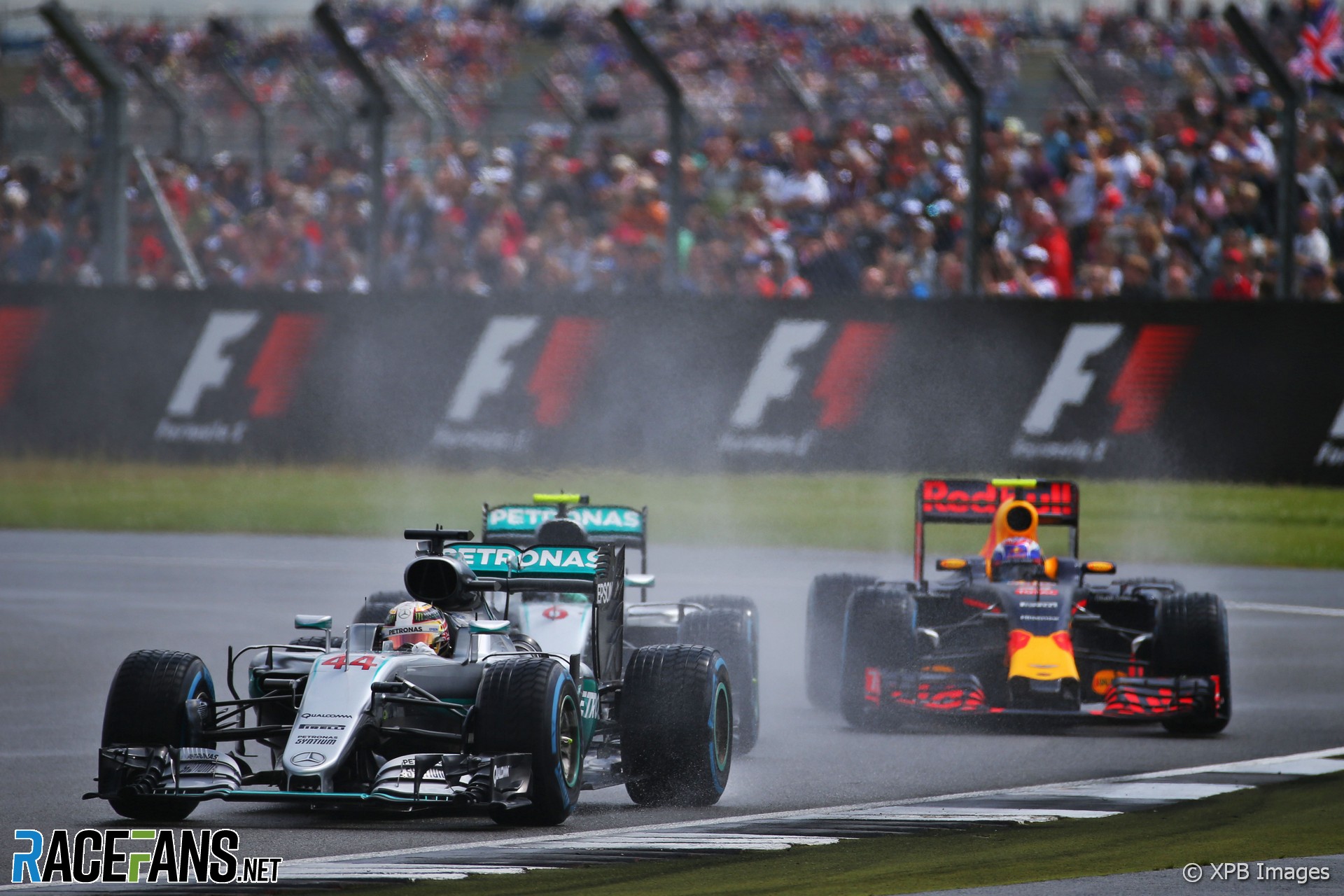 Lewis Hamilton had a rocky start to his bid for a fourth world championship but he drew a line under it in emphatic style in front of his home crowd.

For the third year in a row, Silverstone was fortress Hamilton. Even the pre-race shower which doused the circuit seemed to play into his hands as Nico Rosberg floundered in the wet conditions.

The cars had assembled on the grid when, with superb timing, clouds amassed over Silverstone and dumped their contents over the assembled drivers, dignitaries and somewhere north of 100,000 fans.

A desire to please television schedules means race starts seldom get postponed these days. With major tennis and football finals scheduled on the same day, waiting for the track to drain a little so a standing start might be possible was never going to be an option.

Instead we had five laps behind the Safety Car, which many drivers felt was too many. As Bernd Maylander headed for the pit lane he was followed by ten drivers each seeking to swap their mandated set of wet weather tyres for intermediates.

Hamilton closest brush with disaster came moments before the pack was released. Alternately accelerating and slowing to generate temperature in his brakes and tyres, he almost pranged into the Safety Car.

“I’d glazed my rear brakes and they were really low on temperature so I was trying to pick them up,” he explained.

“The Safety Car’s so slow, you can’t imagine. I’m sure he’s going as fast as possible but our car is so fast that… and you can’t see really that well even behind the Safety Car. There’s a lot of spray but yeah, I braked and the thing wasn’t stopping. So I nearly hit the Safety Car. It’s a first. Fortunately I didn’t.”

Hamilton executed the rolling start perfectly and left Rosberg to deal with a fired-up Max Verstappen. The RB12 was finding purchase through the moisture which lesser chassis could not, and paying close attention to Rosberg’s car through the spray.

Ricciardo looked potentially quicker, and on lap six dived to the pits for intermediates. It might have paid off had Pascal Wehrlein – one of the first onto intermediates – not dumped his Manor into the Abbey gravel bed.

The Virtual Safety Car was summoned, and those yet to pit seized on the opportunity to make their intermediate tyre switch while losing minimal time. Ricciardo lost ten seconds in an instant and fell behind the late-stopping Sergio Perez. That left just one Red Bull hounding Rosberg.

Hamilton’s lead over Rosberg was little more than four seconds at this stage. Verstappen had slipped around three seconds behind his quarry after the VSC, but as the intermediates wore down and the track reached the crossover point for slicks he was bearing down on the silver car again.

Renault’s power unit upgrade may have reinvigorated Red Bull’s pursuit of Mercedes but it’s still no match on the straights, so Verstappen was going to have to get creative. He did just that on lap 15, stunning Rosberg by sweeping around the outside of Becketts, a place overtaking Formula One cars seldom tread.

Meanwhile Sebastian Vettel, who had started 11th after a gearbox change penalty, became the first driver to risk a switch to slicks. This proved ideal timing, but the damp surface either side of the narrow band of dry track proved treacherous, and three laps later Vettel spun away his hard-won advantage and more. He was far from the last to be caught out.

The rest were quick to follow Vettel: Mercedes performed their second double-stop of the race on lap 17. Verstappen played it safe, hanging on one lap more, yet retaining his advantage over Rosberg. And with the track still drying he even began making inroads of his own until lap 22, when he ran wide. Hamilton had a moment of his own at Abbey six laps later, and Verstappen almost followed him.

“It’s very difficult because I think when everybody touched the water sometimes the spray goes to the left so you just approach it exactly the same way but suddenly you pick up a little bit of water on the tyre and you just slide off,” Verstappen explained.

“I think Lewis went off and I went off on the same lap so I think because of the spray it comes onto the normal racing line and then you have a bit of a moment when you have to go off.”

As the racing line dried out fully, the superior performance of the Mercedes told. Verstappen dropped back from Hamilton and soon had Rosberg breathing down his neck. It appeared to be an inevitability that Rosberg would eventually sweep by with DRS, but at the wheel he was working hard to maximise his advantage.

“You’re playing around with your ERS deployment, I’m trying to get him to empty his battery so that then I can have a good shot – but then when his was empty mine was empty too. So that didn’t work.” The pass was eventually made, with DRS and little drama, on the Hangar straight.

Rosberg began edging into his team mate’s advantage but by then Hamilton had already turned his engine down, mindful of his disadvantageous situation in terms of engine life. There was also tyre degradation to beware of: Pirelli had advised teams not to go beyond 28 laps on the medium compound. Hamilton completed 35 with little trouble, as did almost every other driver who saw the chequered flag.

However Rosberg’s run to the chequered flag was less straightforward. Six laps from home the Mercedes jammed in seventh gear, and Rosberg lost over three seconds in his pursuit of his team mate. As with Hamilton’s problem in Baku, Mercedes faced the dilemma of how much help they could risk offering without falling foul of the strict new radio rules.

After notifying him of a settings change, Mercedes also advised Rosberg on how to change gears to minimise the problem. After lengthy post-race deliberations the stewards agreed this went too far, and handed Rosberg a time penalty which dropped him behind Verstappen in the final classification.

Ricciardo finished a lonely, bored fourth after losing out due to the VSC. Perez squandered part of the benefit he had gained from it by spinning, which brought Kimi Raikkonen within range – the Ferrari driver soon made his way past. “I could have kept fifth place without that spin,” rued Perez after taking sixth ahead of his team mate.

Nico Hulkenberg was less fortunate with the VSC and lost time behind Felipe Massa’s Williams as a result. “I was stuck behind Felipe for so many laps, even though I was a lot quicker than him,” he said. “There was only a narrow dry line with a lot of standing water offline so it wasn’t easy to make a move.”

After catching a slide his father would have been proud of, Carlos Sainz Jnr took eighth. Daniil Kvyat made it two Toro Rossos in the points with tenth.

The pair were separated by Vettel, who copped a five-second penalty after accidentally forcing Massa wide as he passed the Williams. A second pit stop for Massa and two errors for Valtteri Bottas ensured Williams ended the day point-less.

Sauber worked hard overnight to give Marcus Ericsson a car to race after his crash but a power unit problem put him out early on. His team mate Felipe Nasr made up more places in the race than any other driver, and even took Bottas at one stage, yet still only finished 15th.

After his fourth victory of the season Hamilton has moved within a point of his team mate (pending appeals) is poised to grab the lead as the season moves into its second half.

He knows the remainder of the season may not be straightforward and engine penalties are almost certain to come. But his crushing performance on home ground shows he has little reason to be concerned about the threat from Rosberg in a straight fight.