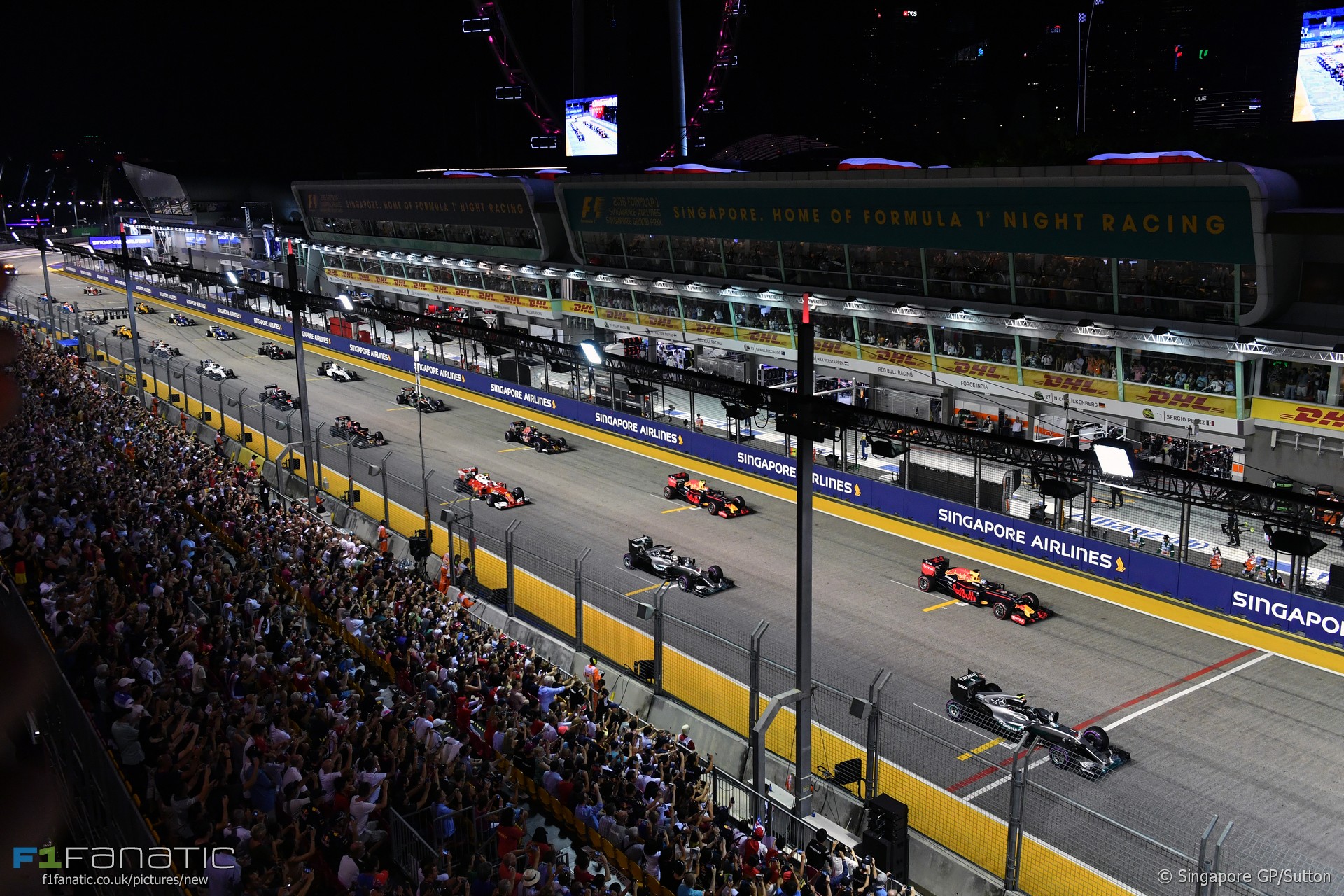 While Nico Rosberg chalked up another victory in Singapore there were fine drives of note by several of his rivals during the weekend. Here’s the F1 Fanatic verdict on the field.

Lewis Hamilton – A hydraulic problem in second practice limited the amount of race preparation he was able to do. A suspension problem was fixed on his car overnight but he never managed to bounce back from his Friday setback. In final practice he was having difficulty getting the car stopped at turn seven and he lost out to Ricciardo as well as Rosberg in qualifying. Matters scarcely improve in the race as another error at turn seven dropped him behind Raikkonen. At least an aggressive change in strategy helped him get back on the podium.

Nico Rosberg – While Hamilton toiled away, Rosberg had a rather smoother practice and was on top form in qualifying, blowing away the competition in Q2 and Q3. Although he pulled out a healthy lead early in the race it wasn’t an easy cruise to victory this time: Ricciardo came on strong in the final stint while Rosberg had to stay out on worn tyres. He coped with the pressure superbly, moderated his pace well and clung on to maximise his points haul on a tough day for his team mate.

Sebastian Vettel – Was off Raikkonen’s pace in practice and complained of a lack of rear grip. However a broken anti-roll bar wrecked his qualifying effort, leaving him last on the grid. Much like Hamilton in Spa, a plentiful supply of fresh tyres made his job of cutting through the field rather easier, and he recovered to fifth place. He was fortunate that the early Safety Car minimised his losses in the opening laps, but to only lose six seconds to Raikkonen from lap two while making up all those places was a fine effort.

Kimi Raikkonen – A slight error in Q3 possibly kept him from beating Verstappen, but he looked the quicker of the two Ferraris before Vettel’s problems. He had good pace on the super-softs, stayed in touch with Hamilton, and was able to take advantage when the Mercedes driver went off. Ferrari’s subsequent strategic decision amount take taking a guaranteed fourth instead of a possible third, which was hard to fathom.

Felipe Massa – Backing off for yellow flags in Q2 might have cost him a place in Q3, though he was slower than his team mate. Running three stints on the softest tyres didn’t work out: he kept falling into traffic and having been ninth early on he finished out of the points.

Valtteri Bottas – Promoted to tenth on the grid by Perez’s penalty, he was hit by Button as both tried to avoid Hulkenberg’s crash on the first lap. He sank to the rear of the field and matters got worse when his seat belts came loose, forcing a lengthy pit stop. With temperatures rising the decision was taken to retire the car.

Daniel Ricciardo – A rapid time in Q1 raised hopes another pole position would be possible but he had to settle for second place behind Rosberg. He gave chase to the Mercedes all race long, especially when he had a chance to attack in the closing stint. Finishing less than half a second behind the Mercedes, it was clear he’d left nothing on the table.

Max Verstappen – Like his team mate he made it through Q2 on super-soft tyres, but he qualified two spots behind Ricciardo. He made another of this recent starts, this one relating to a problem with his clutch, and inadvertently triggered chaos behind. His subsequent fight back to sixth was first-rate, however.

Nico Hulkenberg – Came within a hundredth of a second of splitting the Toro Rosso drivers in qualifying. However this decent qualifying position came to naught when he was involved in a racing incident at the start which fired him into the pit wall.

Sergio Perez – Failing to obey double waved yellow flags earned him a total grid penalty of eight places and cost him a start inside the top ten. This error was the prelude to a fine race performance in the usual Perez mould: stretching out two long stints to claim a useful points haul for the team.

Kevin Magnussen – Renault’s hopes of reaching Q2 were dashed as Magnussen needed another four-tenths to do it. However he took full advantage of the first-lap collision to claim a place in the top ten. A long, 17-lap opening stint on ultra-softs opened up the possibility of finishing the race with two further stints on super-softs which was just the trick, and landed Renault’s second points finish of the year.

Jolyon Palmer – Admitted he pushed his tyres too hard in qualifying and “the performance fell off a cliff” as a result. He picked up a slow puncture early on in the race, had to pit early and dropped behind the Manors. He eventually got ahead of them but could only manage 15th.

Daniil Kvyat – Needed and deserved his confidence-boosting seventh on the grid, right behind Sainz. Stuck behind Alonso early on he then slipped behind Perez too and had to give best to Verstappen after a superb tussle between the two.

Carlos Sainz Jnr – Delivered the maximum in qualifying on a track which suited the chassis but the race left him angry. A black-and-orange flag for damage repairs dropped him out of the battle for points, and an MGU-K problem consigned him to a frustrating evening.

Marcus Ericsson – Power unit problems led to an engine change in practice, but in qualifying he was Sauber’s only representative in Q2. A decent start got him up to 11th place but Sauber took the surprising decision to sacrifice that track position as early as lap nine, committing Ericsson to a three-stop strategy, and he lost too much time in traffic as a result and was even beaten by one of the Manors.

Felipe Nasr – Having been pleased with his car’s performance in practice he was dismayed to struggle in qualifying with poor rear grip and difficulty getting the temperatures right. However his two-stop strategy proved the better option in the race, and he brought his car home 13th. Between the contrasting performances of the two Sauber drivers on Saturday and Sunday it’s not hard to believe a points finish was possible here.

Fernando Alonso – Consistently the quicker of the two McLarens, Alonso got his car into Q3 and qualified ninth. He made his usual combative start and was up to fifth early on, then managed his pace very carefully in order to be sure he could make a two-stop strategy work without giving away track position. That done, he brought the car home seventh having only lost places to two considerably quicker cars.

Jenson Button – Clipped a barrier during Q2 and picked up a puncture which ended his bid for a place in the top ten. He got caught up in the Hulkenberg crash at the start which broke his front wing and left him with other damage which couldn’t easily be repaired. Rising brake temperatures later forced him out.

Pascal Wehrlein – “This is a track where you need a lot of downforce and good traction. We don’t have enough of either,” said Wehrlein after qualifying 20th. Nonetheless in the race he managed a 24-lap stint on ultra-softs at the end to keep Ericsson behind and finished far ahead of Ocon.

Esteban Ocon – Didn’t get to grips with Singapore as well as Wehrlein on their first visit to the track and was comfortably out-qualified by his team mate. In the race he was penalised for overtaking under the Safety Car – a big no-no – and his pace was quite a bit slower too.

Romain Grosjean – It was a dreadful weekend from the start for Grosjean. An engine air inlet leak sidelined him in first practice, he hit the barrier in the second session and he crashed again in qualifying. Having described the car as one of the worst he’d ever driven, he was spared having to do just that due to a pre-race brake-by-wire failure.

Esteban Gutierrez – A standard weekend, in that he finished eleventh and the leaders complained he held them up. To his credit, he out-qualified his unhappy team mate and finished in front of a Williams, but a point was definitely in the offing here.

Who got the most out of their car in qualifying and the race? Who put their team mate in the shade? Cast your vote below: